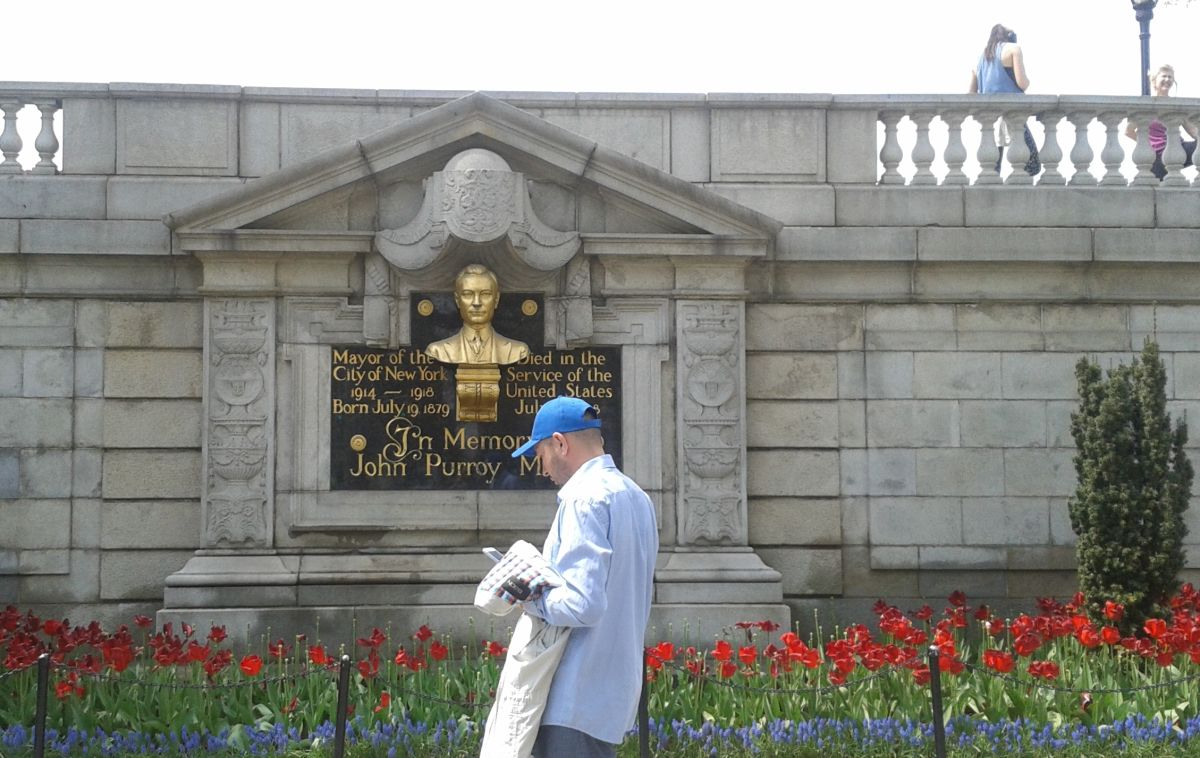 Busto in his honor in Central Park: 5th Av with 90th St

Every time an election for the mayor of New York approaches, several candidates proclaim their desire to be “the first Latino” to lead the largest city in the US But in reality, NYC already had a Hispanic mayor, born in The Bronx, of Venezuelan origin: John Purroy Mitchel.

“I had the pleasure of hugging some of my compatriots: Mr. Juan B. Purroy, consul of Venezuela, a man of activity that a Yankee would admire …”, wrote in his autobiography José Antonio Páez, former president of that country and lover of Nueva York, city where he died in 1873.

Far from suppose Paéz that four decades later, a grandson of that Venezuelan consul would be acting mayor of New York in 1910 and then elected for the period 1914-1917, during the first world war.

Purroy Mitchel was also baptized as “The mayor child”, as he was barely 30 years old at the time of assuming office the first time (1910) and 34 upon returning in 1914.

So far he has been the second youngest mayor in New York and “the only Latino”, confirmed in 2013 historian Louis DiGiorno, from Fordham High School, in the Bronx, where Purroy Mitchel graduated. His clarification came during the electoral campaign of that year, when the candidate Adolfo Carrión Jr. proclaimed his intentions to be “the first Latino mayor” of the city.

According to the records, the young mayor’s maternal great-grandfather was José Joaquín de Purroy, a lawyer who emigrated from Spain to Caracas, where he married María Salomé Echezuria y Echeverría. Thus was born Juan Bautista Purroy, who would emigrate to New York. His daughter Maria, mother of the future mayor, “He grew up in a bilingual home” and with dual nationality, Venezuelan and American, DiGiorno detailed.

He also cited a report from New York Herald 1913, in which Purroy Mitchel highlighted his Latin roots. “I personally have a deep interest in South America that springs from family ties and personal experience, as well as the friendship we all feel here for our neighbors to the south. My grandfather, John B. (Juan Bautista) Purroy, was born in Venezuela and, despite being a US citizen, represented that government here for a number of years as its consul; and I consider my visits to South and Central America among the most pleasant and interesting experiences of my life ”.

In 2016, from Caracas, the historian Yepsaly Hernández Núñez confirmed that Juan Bautista Purroy, the grandfather of the future mayor, was the consul of Venezuela in New York for nine years (1839-1848), appointed by Páez and replaced during the government of José Tadeo Monagas.

Purroy Mitchel used his maternal surname before his paternal, which makes him the namesake of his Venezuelan grandfather. He was born in the Bronx in 1879 and after studying law at New York Law School he began to work in the local government. In 1905 his investigations into corruption led to the removal of the then presidents of the Manhattan and Bronx city councils. His enemies were not few and it is said that he suffered attacks on at least two occasions.

Mayor of Republican Party, was a nationally renowned reformist who fought corruption and promoted austerity, recruitment and police purge. And despite having him endorsement of former President Theodore Roosevelt (1901-1909), Purroy Mitchel failed to be reelected in 1917.

Roosevelt showed respect and appreciation stating that “you cannot find in our country a stronger American, a more capable and selfless public servant, and a higher quality soldier than Purroy Mitchel.”

His life was short: after becoming mayor, he enlisted in the aviation to fight in the First World War, but died almost immediately in an accident. during training in the summer of 1918, just days before his 39th birthday. The war would end that November.

Long Island Air Force Base is named after him and a bust of hers stands on Central Park, at the entrance of 90th street with 5th avenue. Also on the Upper West Side, a plaque commemorates the house where he lived as mayor, at 258 Riverside Drive, at 98th Street. There, the Historic Landmarks Preservation Center (HLPC) text points out his Hispanic roots.