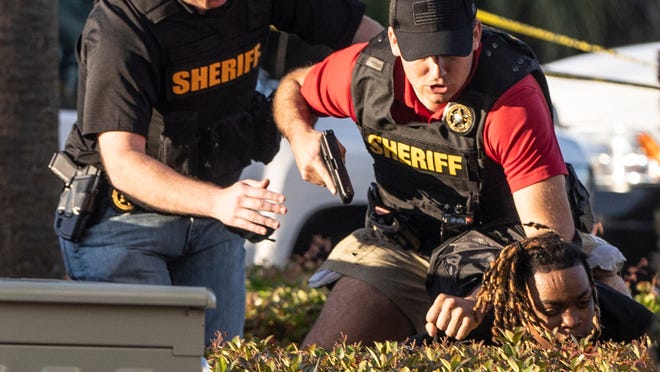 PANAMA CITY BEACH — On the heels of a dramatic surge in crime in Panama City Beach during the weekend, Bay County law enforcement officials say they stand united against criminals who visit the area.

In a press conference Monday at the Beach Police Department, local officials announced they confiscated 75 illegal guns and arrested more than 160 people during the weekend.

Beach Police Chief J.R. Talamantez, who stood at the conference with other law enforcement leaders behind an assortment of seized weapons that ranged from pistols to shotguns to semi-automatic rifles, said the criminals “will soon find out what justice looks like in Bay County.”

“Right here, today, we stand united as not only law enforcement officials, not only as city leadership or county leadership, but just as citizens of Bay County,” Talamantez said. “What we saw this past weekend is absolutely unacceptable, period. These pathetic cowards who came and committed these crimes — their actions will not be tolerated.”

Bay County Sheriff Tommy Ford said he believes there could have been many tragedies this weekend if it were not for the combined effort of numerous law enforcement agencies.

Despite the influx in crime and guns, only one shooting occurred in Panama City Beach during the weekend.

The shooting occurred Sunday afternoon near the Waffle House on Front Beach Road. The victim, an unnamed 21-year-old from Alabama, was shot in the foot.

“We were faced with dangerous circumstances but stood firm in protecting our county,” Ford said. “Each one of these 75 firearms … represents a violent encounter with law enforcement, and I’m so proud of the law enforcement officers who stood in that gap (between) citizens and the criminals who were carrying these guns.”

He noted that of those arrested Saturday and Sunday, almost 80 were from Alabama.

Ford also said local law enforcement agencies have planned for this weekend for about two or three weeks because of an anticipated increase in visitors.

“We will not tolerate this criminal activity,” he said. “These are behaviors that we as a community have fought before, won and moved on (from) to become a premier family destination. … If you come here to act like a criminal, we’ll treat you like one.”

According to Chief Mark Smith of the Panama City Police Department, the visitors to Bay County who caused the weekend’s chaos were not traditional spring breakers, but true criminals.

Officials noted that many of the people associated with the dangerous groups left the area on Sunday.

“Every time one of our brave officers confronted these 75 individuals (who had the guns), it was an opportunity for that brave officer to have lost (their) life or been forced to take someone else’s life,” Smith said. “This is not what Bay County is about, (and) not what Panama City Beach is about.

“… This isn’t what we want coming to our city,” he added. “We want the spring breakers. We want the tourists, (but) we don’t want this (criminal) element.”