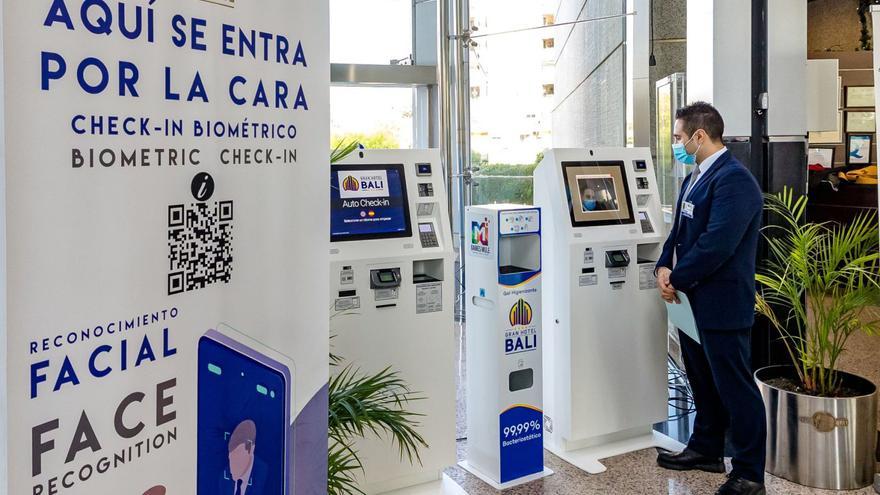 No queues or waiting and with the face as identification. Entering “by the face” is already possible in some Hotels; that is, do the «check-in»Through facial recognition is already being used in some lodgings from Benidorm after the implementation of a pilot system with technology that allows recognize customers by their features. In a few months, 20% of users who have registered in establishments with this technology have done so through this new facial system.

The presentation this Monday of the facial recognition system in Benidorm. | DAVID REVENGA

This technological project is developed by the hotel management Hosbec and currently operates in eight hotels associated with the entity, as explained by the secretary general of the hotel association, Nuria Montes. In addition, three more accommodations are in the process to include it in their receptions. But how does the facial recognition to check into a hotel? Well, previously, in a way ‘online‘the data is inserted and when it arrives at the hotel the technology does the rest. Thus, you will be able to have access to the hotel with the room key, through an identification of your face and a verification of your identity with your previously presented document.

This technological project was developed in 2021 by Hosbec with the direct collaboration of Turisme Comunitat Valenciana and has a budget of 40,000 euros. “Face2Travel” is the Alicante company selected by Hosbec in a public tender to develop this system. The Bali hotel in Benidorm is one of those that have started it. In these months, waiting times for customers to access the facilities have been reduced.

“When we returned from the first wave, images of queues in hotel establishments caught our attention,” said Montes. This is where the idea came from and this pilot initiative was launched, which “complies with all the indications of the data protection agency, since no images or data are stored, and it has also been very well received by customers.” Thus “we have broken the barrier of technological adaptation” and the health situation “has helped” because customers have learned to use technology more quickly. Montes indicated that it is an “undoubted advance in hotel management” and that “it does not amortize any job position but rather frees it up for other more qualitative tasks.”

The regional secretary for Tourism, Francesc Colomer, highlighted the commitment to “promote technology and artificial intelligence in the tourism sector to make the experience at the destination more pleasant.” But all while preserving “the ethical component and not injuring the rights of people.” The project “expresses the essence of collaborative governance”, while it has stressed that “once again, Benidorm is in a vanguard position even in the worst moments in which we have not stopped looking to the future with long lights ».