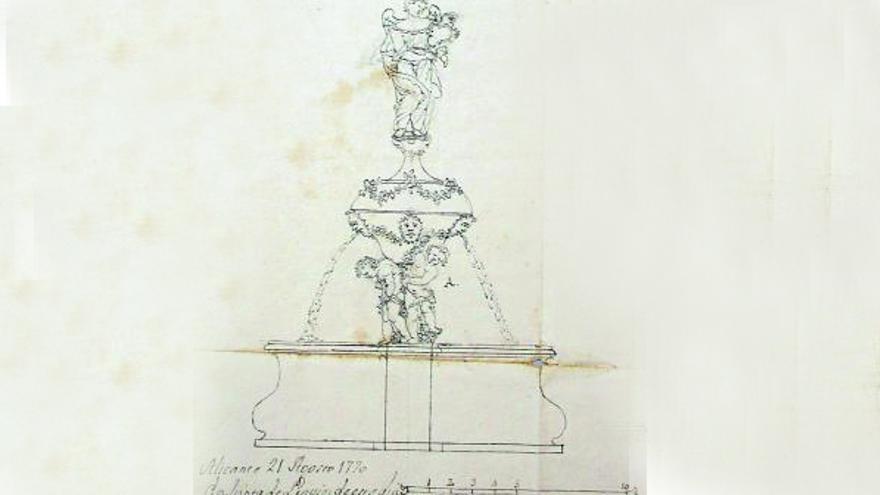 In 1770 Alicante was a prosperous city thanks mainly to its port, from which a large number of products were exported, especially agricultural products.

Of the agricultural production in the municipality of Alicante, it was barley that generated the most wealth, with an annual value of 126,000 Valencian pounds, followed by barley (78,000) and wine (43,224).

The 292 settlers (153 men and 139 women) who, just a year before, had arrived in the city from the Tunisian island of Tabarka, departed from said Alicante port on 19 March 1770 for the island of Nueva Tabarca. . The average age of these Tabarquino settlers was 50 years (the oldest, Antonio Leoni, was 88 years old; the youngest, María Rosa, 14 months). During their stay in Alicante, they had been housed in the old Jesuit college, abandoned two years earlier after their expulsion.

Precisely on June 5, 1770, the conflictive and long negotiation began to distribute the assets of the expelled Jesuits between the Alicante City Council and the Church. Mayor Francisco Álvaro and Bishop José Tormo met that day at the Casa de la Misericordia, the second’s residence in the city, to agree on the distribution, based on the “Inventory of goods and temporalities of the Society of Jesus in Alicante” , which had been drawn up in 1767, a few days after the expulsion. In this prolonged negotiation, the Church had a great advantage: while its interlocutor was always the same, the bishop, there were several at the town hall as the mayor was changed from time to time.

Appointment of Pedro José de Guizaburuaga as mayor, on August 9, 1770. BUT

Thus, on August 9, Carlos III appointed Pedro José de Guizaburuaga to the staff of mayor of the city of Alicante and lieutenant of the magistrate, who, from then on, took charge of imparting royal justice “and hearing, to fight and determine lawsuits, businesses and causes, civil and criminal ”, in addition to continuing with the bishop the negotiations for the distribution of the assets confiscated from the Jesuits.

Forty-seven days earlier, on June 23, another appointment was made, that of José Giner as interim warden of the Alicante prison. Until then, Giner had served as an ordinary minister in that prison. He replaced Cristóbal Ramírez, who had been dismissed after the escape of a prisoner, Antonio Carratalá, who had defrauded the Royal Treasury. However, Ramírez had the power to propose his successor and serve as guarantor.

On the same day that Giner was appointed as the new prison warden, Ramírez signed a public deed with him in which both promised to bind his assets as a guarantee that he would properly exercise his trade. Ramírez declared several possessions that he had in the Polop term: eight days of land that he owned in the Mondroy party, “planted with almond, fig and carob trees, and his part of the orchard with living water from a fountain”, valued at 220 pounds ; and eight tahúllas in the Ponoig party, planted with vines useful for wine and almond trees, valued at 280 pounds. Giner and Ramírez signed the document by which they promised not to sell or dispose of their declared assets “until this deed is canceled”, in the presence of three witnesses: the Sheriff Lazaro Izquierdo, the clerk Joaquín Soler and the doorman José Cremades. The following July 5, the document was noted at the Denia mortgage office, head of the judicial district to which Polop belonged.

In the middle of the year, a report signed by the master builders Vicente Mingot and Manuel Martínez said that the plumbing of the fountain in the Plaza del Mar had been checked, «in order to know the cause of bursting so many times, the one that Passing in front of the house of Don Miguel Bonanza, and registered the height of this fountain, it is found that its regolfo reaches the corner of the house of Don Nicolás Pobil, where it is seen that whenever the vent that It is in that traffic, it bursts because the wind of this portion of the pipe has no way to get out, with which it is necessary to maintain the one it has and it leaves, in an underground room of the house of Salvadora Boch, because every time water is given to the fountain, the plumber must go to this room to open it, so that he expels the wind from the pipe so that it does not burst; Likewise, you should go to him whenever the water is bent to the source, which happens when a squadron of warships comes to the waters (…) ».

This old fountain located in the square then called del Mar (now the Town Hall), the place where the works of the new town hall building were being completed, had four pipes and two pools and was known as “Fuente del Ángel” due to the statue of an angel who finished it off, on whose chest she held the king’s weapons. It was so deteriorated that the council decided to replace it with another more notable and lucid one.

Lorenzo Chápuli drew two designs for the new fountain in the Plaza del Mar and it was his son, the master builder José Chápuli, who built it, completing it two years later. The fountain had a circular pool, on which sat two cupids that marked the shield of the city that was on a pedestal, on top of which was a cup adorned with swans and masks from whose mouths the water poured. It was topped by a cape-clad male figure holding a baton.