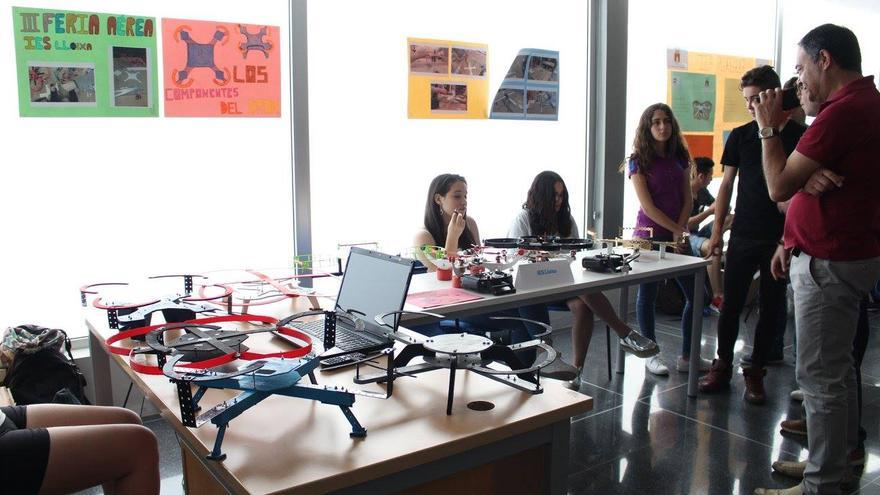 600 Primary and Secondary students from the Valencian Community They will present their final educational innovation projects within an activity integrated into the Mediterranean Night of the Researchers, Mednight 2021 .. A great online event where all the final proposals of the 3 educational projects that they have developed throughout the course can be followed live academic in their centers and that they intend to promote Mediterranean Science in some of these areas: Geology and diversity; Sea and pollution; Climate and clean energy; Diet and feeding; Life and health; History and Heritage; Pioneering Scientists and Future.

It’s about MOMO, The Air Fair and Program your work. Three initiatives devised and directed by El Caleidoscopio, one of the 13 partners that make up the Mednight 2021 Consortium.

Highlight that The Mediterranean Night of the Researchers, Mednight 2021, is a consortium of 13 scientific entities, universities and research from Spain (Valencian Community and Murcia Region), Greece and Cyprus. The objective of this union is to show citizens the relevance of Mediterranean Science and Research, emphasizing the role of women. The project is part of the European Research Night, a scientific dissemination project promoted and funded by the European Commission as part of the Marie Sklodowska-Curie actions of the Horizon 2020 program.

On the morning of June 17, the live event of the secondary schools will be held, while on Friday, June 18, it will be the turn for the primary schools. The event can be followed live on the Mednight 2021 website. The events will be presented and directed by the well-known monologist, Rachel Sastre. Screenwriter of programs such as Órbita Laika, El Hormiguero, La Hora de José Mota or La que se avecina.

Both days, the students will present to the rest of the educational centers theirs final project proposals. At La Feria Aérea, they will show the drones for social and environmental purposes that they have built themselves; The short films they have made in Stop Motion using digital electronics and 3D printing from MOMO or the short films from Programa tu obra, in which one of the protagonists is a humanoid robot that they have previously learned to program, will be screened.

In this course all the projects have the collaboration of Mednight 2021; the Spanish Foundation for Science and Technology FECYT; the Ministry of Science and Innovation; the University of Valencia; the Miguel Hernández University of Elche; the Teacher Training Service of the Ministry of Education, CEFIRE; the Scientific Culture and Innovation Unit of the University of Valencia; MUDIC (Educational and Interactive Science Museum of the Vega Baja del Segura) and with the collaboration of the Valencia and Alicante Town Councils: Albaida; Algemesí; Crevillente; Requena; Cheste; Alfara del Patriarca; Palm tree; The Verger; Pilar de la Horadada; Buñol, Dolores and El Poble Nou de Benitatxell who through their Education departments have opted for the academic excellence financially supporting the educational projects in the schools of their municipalities.

The Mediterranean Night of the Researchers, Mednight 2021, is a consortium of Universities, research centers and science and technology agencies from Spain (Valencian Community and Murcia Region), Greece and Cyprus. The objective of this union is to show citizens the relevance of science and research Mediterranean, emphasizing the role of women. The project is part of the European Research Night, a scientific dissemination project promoted and funded by the European Commission as part of the Marie Sklodowska-Curie actions of the Horizon 2020 program.

The proposal, coordinated by the Alicante company The Kaleidoscope, brings together the participation in a consortium of these 13 institutions: Foundation for the Promotion of Health and Biomedical Research of the Valencian Community (FISABIO); Universitat Jaume I (UJI); University of Valencia (UV); Foundation for Research of the Hospital Clínico de la Comunitat Valenciana (INCLIVA); State Agency Higher Council for Scientific Research (CSIC); University of Murcia; University of Alicante (UA); Didactic and Interactive Science Museum Foundation of the Vega Baja del Segura of the Valencian Community (MUDIC); Polytechnic University of Cartagena (UPCT); SÉNECA Foundation – Science and Technology Agency of the Region of Murcia; Epistimi Epikoinonia and SiCo Cyprus.