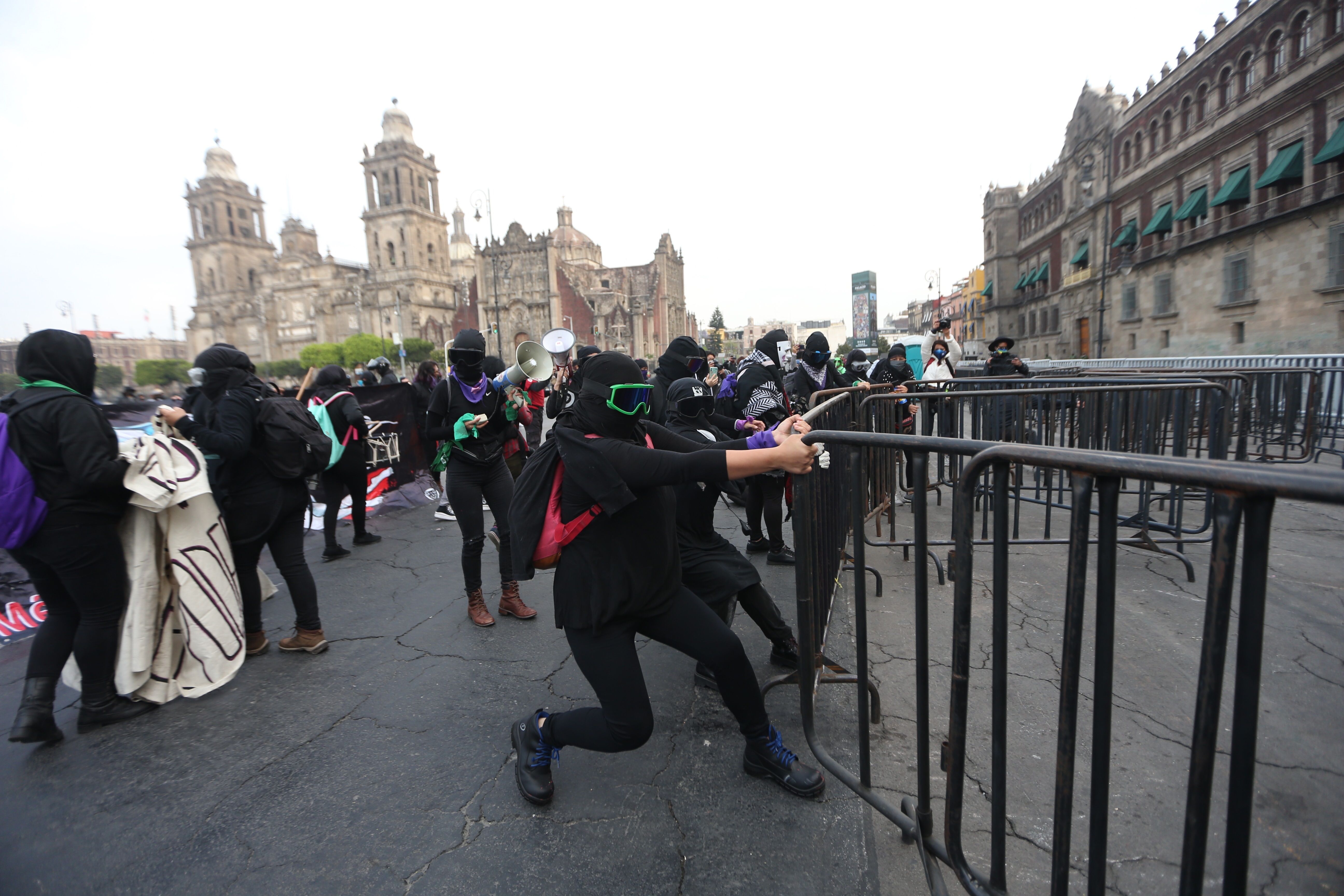 The feminist movement is getting closer every day to the gates of the National Palace. It is a threat that may be counted in electoral votes. Or a chance to win them. Women have put equality and non-violence at the center of the debate and their struggle is questioning these days, with an unknown force in Mexico, the institutions, the political parties and the actors in public life. The political storm that surrounds Félix Salgado Macedonio, a member of Morena and a candidate for governor of Guerrero accused of two rapes and several sexual abuse, is just the latest headache for a president, Andrés Manuel López Obrador, who since the beginning of his mandate has had trouble interpreting the struggle of women for their rights.

This Tuesday moments of tension were experienced again. Dozens of activists flocked to the Zócalo as the president held his daily conference. They were encapsulated by the police and found no interlocution, but the cry remained in the square: a rapist cannot be governor, they claimed, referring to the Salgado Macedonio case. Their demands are putting the president’s own speech into trouble, who cannot find a place in a feminism without turning back. López Obrador once again framed the matter in a process of “politicking”, that is, something that the adversaries are managing to win electoral support. But the swords are raised, on March 8 just around the corner and the elections just three months later. Nobody seems willing to give in.

“Feminism in Mexico has gained a lot of strength over the last year, a great impetus that should be used to make violence visible and generate progress. Machismo is stripping and female victims are taking the center of the debate. Because we have all been victims in one way or another, but there are some more horrifying cases, “says the president of the Equality Commission in Congress, Wendy Briceño, a Morena militant who these days has raised her voice against the candidate Salgado Macedonio . And many others from his party and beyond.

Melissa Fernández Chagoya, professor at the University of the Cloister of Sor Juana, attributes the rise of feminism and its intervention in public life to three factors: “On the one hand, it is an achievement of the institutionalization of feminism, with many women in positions of State, an achievement of liberal feminism; on the other, to the bravery of the young women and their struggle in the street, who with their fatigue and tiredness are making this cause visible; and finally, the movement finds an echo in the socio-digital networks: now we learn more things, even at the local level, than before ”, he enumerates.

Very critical of the equality agenda of this Government, the veteran feminist Patricia Olamendi, believes that the strength of the movement is placing the problems of women at the center, “in the face of a discourse that does not understand what is happening and everything put in the usual drawers: the enemies, the adversary, the extreme right. Whoever says that is not understanding anything, “he says. “They fail to see the dimension of a movement that is political and social and demands rights. An insurgency for rights ”, he adds.

Today is a demonstration at the gates of the presidential palace and yesterday there was another in front of the Attorney General’s Office in Guerrero, where the women left red paint and an urgent claim: that the justice clarify when the process against Salgado Macedonio is taking place. Women don’t want to wait any longer. “The demands of the feminist movement are legitimate and go beyond political parties and elections. It is important that a person with these formal complaints is not allowed to reach public office, regardless of the party that supports him, ”says Cristina Santana, from Redefine México, the youth area of ​​the Simone de Beauvoir Institute. He is 27 years old and is one of the names that show the vigor of the movement in Mexico and the proof that there is a quarry to follow the game.

The following months will be decisive in verifying the strength of the movement and its scope in the June electoral process. The clashes between feminism and President López Obrador began early in his term and have been a constant. Violence against women, which leaves 10 bodies a day on average in the country, has not diminished, but the hopes that many feminists had placed in this government have. Disappointment and disappointment are words often used when asked about the president’s equality agenda.

In the morning conferences, López Obrador has had some sound stumbling blocks in this area, such as when he got angry with the journalists who were questioning him about the murder of Ingrid Escamilla, a 25-year-old woman, attacked by her partner in February 2020. The president he got upset, he preferred to keep talking about the raffle for the presidential plane. And it showed that the feminist discourse was not well oiled. Despite this, his followers say he is the most feminist president Mexico has ever had. López Obrador flees from that qualifier and prefers to define himself as “humanist.” Women also raised their voices at the suggestion of the attorney general of the republic to suppress the gender perspective to address femicides. Alejandro Gertz Manero could verify then that feminism was not going to wait quietly.

This Tuesday, in the morning, asked about the words of former president Felipe Calderón, who condemned the candidacy of Salgado Macedonio in a tweet, the president has resolved in this way: “Now Calderón is a feminist, there is no more to say.” His idea is that feminism is the heritage of the left, something that feminism itself refutes. Sometimes it places the movement in the social struggle, something that the suffragettes already gave up in the 19th and early 20th centuries. The class struggle is one thing and feminism another. “From my experience I know that feminism is more of the left than of the center or right, but now it is permeating everything, it challenges the institutions and the parties, the political actors themselves. Feminism does not exclude rights and that is the commitment, ”says Briceño.

The compromise will be seen in the elections. Briceño have no doubts that it will influence that process. “It is obvious since it is reaching all the stands, it is present in the morning, in Congress, in all chambers,” he warns. The young Cristina Santana agrees with her: “The movement is very strong and is expressing itself in a very public way, from the youngest to the oldest. It is setting the agenda. We women vote, we are half the country and we make decisions as citizens based on the people who work to guarantee our rights, ”says Santana when asked about the political cost that the Salgado case may have. The demand, he continues, “is that the pact be broken. [Al presidente] It must be clarified that this does not mean breaking alliances with men but with complicity and silence in the face of violence or discrimination ”, he says.

On the incidence of Salgado case, Fernández Chagoya, fears that it is just one more case that falls into oblivion, although she praises the achievements of feminists in this matter. “I think some will climb and others will go down” on the back of that horse, “but the problem is structural, there are more abusers than Salgado. This case has been mediated and will later be forgotten. In any case, the achievements that it has brought with it must be praised ”.

The president’s attitude towards the feminist movement has met with the Salgado Macedonio case the most important front in his years in office. It is enough to see the force with which women from their own party, or from their Government, have spoken with a message that stood next to the victims and against the one designated as the aggressor, something that López Obrador remains undefined. He has thrown balls out and endorsed an applicant who does not find much support on the street. “Of course this is going to have an electoral cost. The feminist movement has been gaining recognition that it did not have in society. Society is agreeing with him, it knows that what is happening is real, that violence is real. The president would have to take measures and seek dialogue with the movement, which now does not exist. Let him talk to them, although he seems not to talk to anyone… ”, says Olamendi.