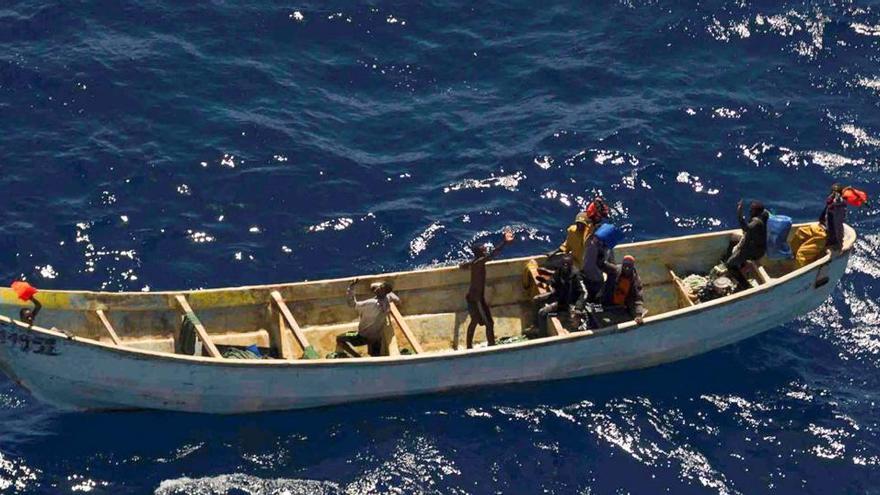 A 17-year-old boy is taken in in a state of “shock” in a center for minors in Gran Canaria after surviving fifteen days of crossing the Atlantic, adrift, in which 16 of his 26 patera companions perished one after another of hunger and thirst and were thrown overboard.

It is a type of tragedy that is increasingly common in the Canary Route, in which thousands of young Africans risk crossing hundreds of kilometers in the open ocean in flimsy boats, but whose details are rarely transcendent; only when there are survivors and if they are willing to tell.

The story of this young man has picked her up Abian Montesdeoca, one of the pediatricians assigned by the Canary Islands Health Service (SCS) to the teams that perform coronavirus tests on those who have just arrived in the islands in patera, where appropriate, minors.

In this case, it was a matter of carrying out the PCRs on the minors who had disembarked at the Arguineguín October 19: a frenzied Monday in which Maritime Rescue transferred 375 people to that port, from 18 different boats and canoes.

“The Police had sent us a letter at the time, with the list of minors who had arrived. They had them registered as having arrived in Arguineguín and had been referred to a center. But this boy was not. I came to think that perhaps he had family networks here and perhaps he escaped from the pier, which is difficult, if not impossible, “he tells the Efe Montesdeoca Agency.

Nine days later, the pediatricians received the notice that the boy they were looking for had just entered a center for minors in Gran Canaria, so they went to assess him. And the boy told them his story, “totally dejected physically and psychologically.”

The boy explained to the pediatrician who attended him that I did not know read and write, because he went to work at the age of eleven to help his family in a town in Morocco, after his father died. He was the only male in the house and he assumed the obligation to take care of his own.

At the beginning of October, he and six of his cousins ​​decided to look for a decent life in Europe, they organized and managed to get on a boat to the Canary Islands, which left with 26 occupants from some point on the coast located between Cape Bojador and Dakhla.

“Those boats don’t belong to many people, and with a good engine, the journey takes two to three days, but they got lost, their GPS broke and they were left adrift. They were at sea for fifteen days. The food is over, the water is over, “says Abián Montesdeoca.

Those days, another young Moroccan who boasts of his 24,500 followers on Instagram decided that it could be fun to record a boat trip to the Canary Islands. He got on one, recorded the trip on his mobile and, upon landing on Famara beach, in Lanzarote, he uploaded some funny images of smiling boys in the middle of the sea to the social network that received multiple criticisms, because they seemed to take this type of crossings as an adventure between colleagues.

That was on October 9. According to the account that the pediatrician Montesdeoca has collected, by then his patient and his 25 patera companions had already been lost for several days and despair raged on board, because food and water were in short supply, if they hadn’t already run out.

Some began to drink sea water, which satiates for a few moments, but accelerates dehydration. They were the first to die. According to this adolescent’s account, 16 people perished, one after another, day after day; among them, his six cousins.

“Imagine making the decision to dump the corpses off the edgeto. They run out of food, run out of water … I thought he was going to die, as they were all dying, “the pediatrician tells EFE Agency. The day this boy says he was rescued because they were found in the sea, the Guardamar Polimnia rescued a boat with 15 Maghrebis, including a minor.

That could be his, but his story fits more with a rescue the next day that actually began on the 19th, when a freighter, the Wadowice II, found a boat adrift 400 kilometers from the Canary Islands with 10 men on board and a corpse, which he later handed over to Guardamar Talía.

The Efe Agency has tried to confirm if one of those two was that young man’s boat, but for the moment without success. The General Directorate for Child Protection of the Government of the Canary Islands has confirmed that the boy is sheltered in a center for minors and is going to receive psychological assistance, because he is “in shock” after having lived a “terrible” experience.

The story of this boy continues on the Arguineguín dock, in the Red Cross camp where more than 1,000 people spent the night during those days, after frenzied rescue days.

The pediatrician suspects that the chaos that occurred that week due to the continuous succession of rescues contributed to the fact that the arrival of these ten survivors did not attract so much attention, because He believes that they must have arrived crushed, crawling, in a state where, in other circumstances, they would have been referred to a hospital.

In fact, he emphasizes that when he saw the boy, after nine days, it was difficult for him to stand up. “It probably stayed on the dock in the corner of a tent. He will not have died of a miracle. Someone will have fed, hydrated and cared for him those days, because he would surely be in a terrible situation. They all stuck there that time without anyone knowing he was there, “he adds.