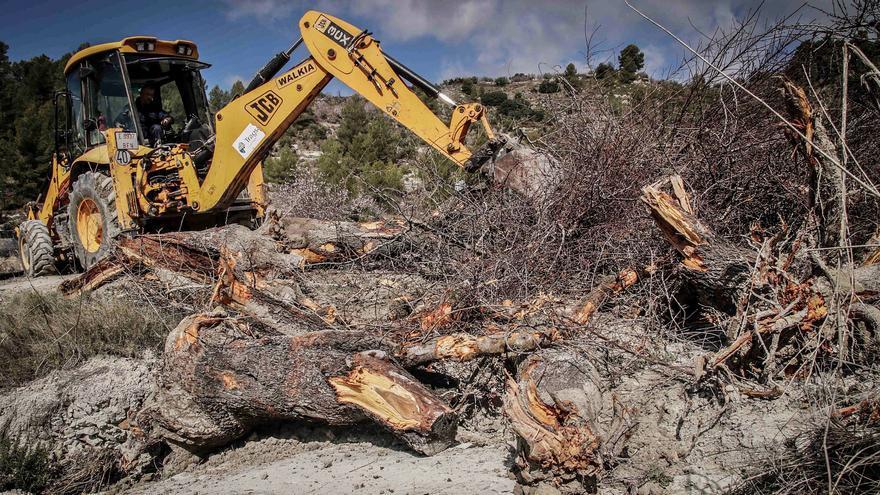 The province of Alicante has become a stopper from which it is tried prevent the spread to the rest of the Peninsula of xylella fastidiosa, a phytosanitary bacterium that attacks almond trees without any possibility of cure. To this end, no less than 100,000 trees have been destroyed so far, a measure promoted by the Ministry of Agriculture that keeps the affected producers on the warpath. This situation is also recorded in a context of plummeting prices, a circumstance that the sector attributes to competition from North American almonds and the laxity of the community authorities, by not including this product in the list of those that count with tariff penalties.

The Alicante province, as well as a small area in the south of Valencia, constitute the only enclave of the Peninsula – in Spain this problem had already been detected previously in the Balearic Islands – in which the presence of xylella fastidiosa has been found. It is a bacterium that attacks species such as vine, olive, plum, peach, lemon or almond, as well as others that do not produce fruit, such as laurel. The vectors or transmitting agents of the disease are insects that feed on the xylem of plants. In this case, the xylella has been primed with almond trees, in addition to other forest vegetables. The number of municipalities affected has risen to 72 to date, located in the regions of Marina Baixa, Marina Alta, l’Alcoià, El Comtat and l’Alacantí. It should be noted that this problem is occurring in one of the main producing areas in Spain. The Valencian Community, in fact, shares with Castilla-La Mancha the third place in the ranking of almond production with 35,000 tons, behind Andalusia, which collects 112,000, and Aragon, which reaches 60,000. Next are Murcia, with 25,000, and Catalonia, with 22,000.

With the aim of stopping the spread both in the province itself and in the rest of the peninsular regions, the Ministry of Agriculture, following the instructions of the European Union, has been applying for four years an eradication plan that has already been carried out 100,000 almond trees, which has reduced production by about 500 tons, a figure that represents 22% of the total. Until now, the action consisted of removing the trees located within a 100 meter radius around the affected specimens. This impact has recently been reduced with a new regulation of the EU itself, which reduces the radius of action to 50 meters. This decision, in practice, means that the number of almond trees pending uprooting goes from 300,000 to 81,000.

As the Director General of Agriculture has been insisting, Roger Llanes, the work carried out is a requirement of the community authorities, which discard a containment plan such as the one being applied in the Balearic Islands, which only eliminates the affected specimens, since in this case the factor has been taken into account of insularity and that, therefore, are isolated by the sea. However, neither these explanations, nor the lesser impact of the change in regulations, are managing to quell the protests of the affected farmers and the organizations that support them. The president of the Young Farmers Association (Asaja) of Alicante, Eladio Aniorte, points out that, “if the plague is widespread and affects numerous understory species, as is the case, the indiscriminate and gratuitous uprooting of healthy almond trees is useless. It is a unidirectional, violent and failed strategy in which the remedy is proving worse than the disease. Furthermore, the compensation that farmers are receiving is ridiculously derisory. ‘

The harvest has been cut this season by almost half. Juani Ruz

They do not have the same opinion in La Unió de Llauradors, where they do support the eradication plan, on the basis that, “unfortunately, there are no other solutions to combat the problem,” he emphasizes. Juan Pastor, producer affiliated with this entity. It does demand, instead, “greater compensation, and that these arrive without delay.” And, as a skinny dog ​​is all fleas, the sector is being affected this campaign by a more than worrying collapse in prices. As highlighted by the same organization, the price of common almonds, which represents more than 65% of production, has fallen by almost 200% since 2015, while it has fallen by 85% over the previous season . The head of the dried fruit sector in the whole of the Valencian Community within La Unió, Ricardo Beltran, identifies speculation, unfair practices and the lack of transparency in the formation of prices as the main causes for having reached the current situation. “We have a food chain that continues to present serious imbalances, which causes damage to the producer sector that this year has been aggravated by the coronavirus and the closure of the hotel industry,” he laments. Beltran It also points to the loss of competition from indigenous productions compared to those from other countries where producing is much cheaper due to the lower level of demands of all kinds. In this sense, he criticizes that the European Union “did not include North American almonds in the list of products with tariff sanctions, and that the Spanish Government has not insisted enough in this regard.”

Selected from almonds after removal of the shells. Juani Ruz

The last straw comes from the harvest, which this season has been reduced by almost half due to the fungi generated by the excess humidity caused by the abundant rains at the beginning of the year. This is attested by La Trencadora, a cooperative located in Castalla dedicated to the marketing of almonds for nougat and other types of consumption, which has seen its activity reduced this year in a more than remarkable way.