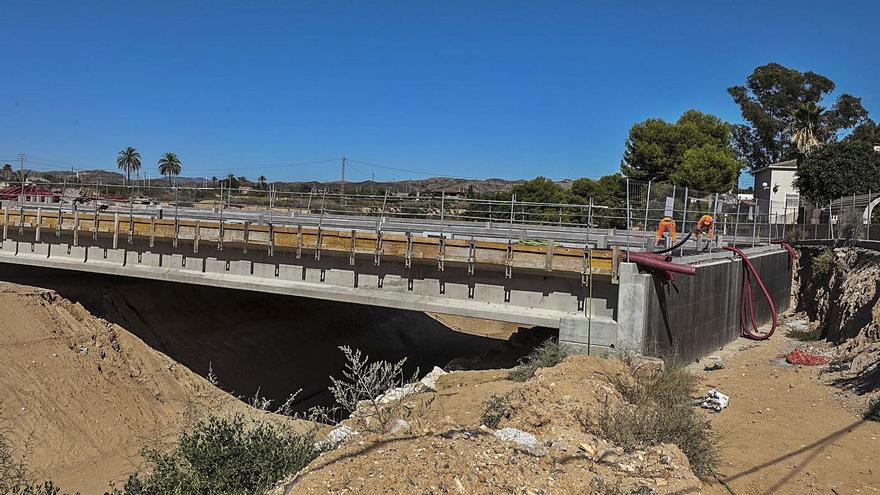 The infrastructure that began to be built in March already has the board assembled and part of its structure to become an extension of Jubalcoy avenue. The initial execution period for this construction was eight months, although the operators still have a lot of work ahead of them to complete this cumbersome work and they will need more time than planned.

It took a 500-ton crane to lift ten thirty-meter-long, 40-ton beams one at a time. The magnitude of the materials that are being used meant that they had to be transported in numerous trailers that encountered many difficulties to be able to circulate through the roundabouts of Elche, especially because of how complicated it has been to make the turning maneuvers.

The most spectacular part of the assembly began in July with the formwork and the placement of a concrete slab on the beams where the vehicles will pass.

Operators are working on the bridge that will link the Altabix University neighborhood with a new sector where a 1,200-home residential complex is projected. | ANTONIO AMORÓS

The infrastructure will have four lanes and two directions of circulation and will serve an expansion area of ​​the city that has 182,000 square meters where they have projected three blocks of three, two and one bedroom homes, a community pool and large green areas. In one of the blocks they have planned buildings for 450 houses, in another for around 370 and the third for 320.

In these lands the General Plan also contemplates another block for educational use, with which the future start-up of a school and an institute is planned. At the same time, the promoters of the project are considering the setting up of a “mini shopping center” in another of the plots, similar to the one already in Madrid, with restaurants, gyms and shops to serve this new enclave of the municipality.

Also Read  Dominican Republic, El Salvador and Mexico among the 15 Latin countries that will obtain work visas for the United States

A bridge to a new neighborhood

However, to get to all this, the urban group E-21 will have to finish a significant part of the work and continue to sort through a host of procedures. And it is that, to conclude the urbanization of the sector, once they finish the viaduct on which they are centered, they will have to demolish the eight-meter bridge that passes over the railway to build a new one of 22 meters. And to that is added the burying of the high and medium voltage power lines that cross the entire surface.

At the moment, the promoters of the work are waiting for the permits from Adif to begin work on the second of the viaducts. All this with the view that throughout 2022 the works to erect buildings can begin, unless there are setbacks.

The urbanization of this residential will mean, according to the developer, an investment of close to nine million euros. The development of this place started in 2019, but dates back to more than a decade ago. Right now, this sector is the only one that is being developed in Elche to start building, although there are many others that are in the process of being developed.