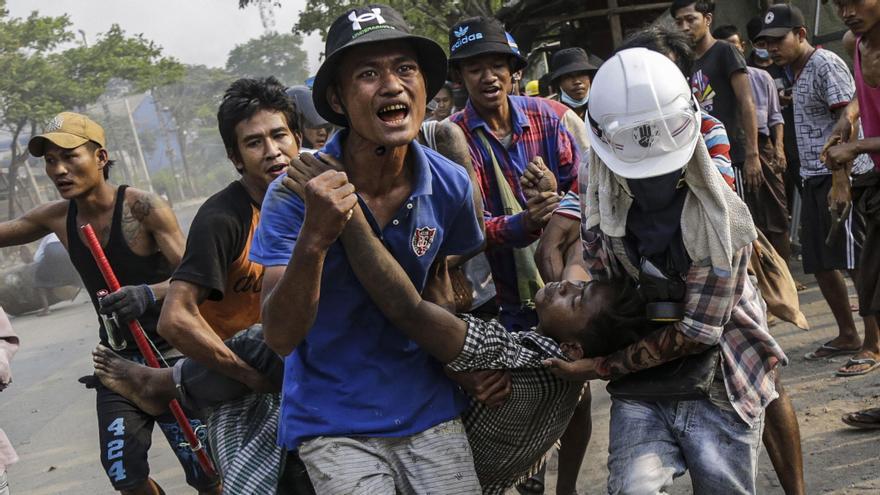 February 1, 2021 Burma ceased to be a parliamentary Republic to be under the yoke of an Army that uses any measure of pressure to intimidate the population. Although the country has been beset by political instability since it declared its independence from the United Kingdom, between 2011 and 2015 a democratic transition began, called to culminate after the November 8 elections, which gave the National League for Democracy ( LND) a landslide victory.

Meanwhile, the formation of the military, the Union, Solidarity and Development Party, obtained only 33 seats. Hours before Parliament confirmed the results of the elections, which would give power to Nobel laureate Aung San Suu Kyi, considered the symbol of Burma’s democratic aspirations, the Army assumed power, declared a state of emergency for a year and detained the country’s top leaders, including Suu Kyi.

After successive military governments in Burma, the last few years represented a ray of hope for the Asian nation. In this context, the step backwards is more painful, more frustrating. This is how he considers it Paing Aung -fictitious name-, Burmese resident in Spain, who tells in an interview with Europa Press that “Seeing everything that has been built in the last ten years turned into the tragedy we see on the news today is particularly frustrating.”.

Paing Aung, who has preferred to remain anonymous, says that since Suu Kyi’s release from house arrest in 2011, expectations for Burma’s future have been “optimistic.” “I remember being a kid in Rangoon and seeing very few foreign people and companies due to restrictions imposed by the military regime and lack of confidence from the outside world when it comes to opening businesses in Burma, “he says.

Nevertheless, “once the dictatorship had fallen, the mood changed dramatically“He adds.” Even two years ago, every time I visited my country during the holidays, I was impressed by the speed at which it was developing and, more importantly, the way it was improving people’s lives. “, keep going.

Among these improvements, Paing Aung lists the literacy rates, the health conditions of the citizens and “the feeling that the population lived in a country that had a bright future.”

The Burmese population has not been silent. After the coup, Mass protests take place in various parts of the country, like the cities of Rangoon or Mandalay. According to Paing Aung, all economic sectors in Burma participate equally “by refusing to work under the military regime.” “This is part of what has been called the ‘Civil Disobedience Movement’,” he says, detailing that it was the medical sector that started it at the national level in the first days immediately after the coup.

The Army’s response, for its part, is increasingly harsh, moving from the use of crowd-dispersing elements such as rubber bullets, water cannons or tear gas to the use of live fire or, according to Amnesty International (AI), “weapons of war” to perpetrate what the agency called ” blood bath “.

United Nations, which has repeatedly denounced the “violent repression” against the Burmese, estimated at the beginning of this week 149 the deaths in the repression of protests, the result of the “illegal use of lethal force”, which “has exploded” in recent days. Despite the fact that it is increasingly difficult to confirm the information that comes from the country, particularly since the imposition of martial law in Rungún or Mandalay, the UN also indicated that 2,084 people remain in “arbitrary” detention.

What’s more, torture of detainees, forced disappearances, internet blackouts, arrests of journalists and a spiral that threatens to intensify. However, these measures have not contained the mobilizations in Burma, which, according to Paing Aung, have the support of the Burmese diaspora in several countries, which organize “peaceful protests” in this regard.

Paing Aung, who was born in Rangoon and has family members there, says that his acquaintances tell him that the general situation in the country is “very negative” and “there is a lot of fear.” Thus, the people he knows do not participate in the protests “actively”, mainly because of the “fear” they cause them. “And they have no intention of doing so, especially now that the level of violence is increasing,” he clarifies.

Asked whether the internet blackouts somehow stop people from organizing to protest, he specifies that “they do not deter them.” “It is important to mention that, growing up in Burma, blackouts have been a very common part of my daily life.”, it needs.

But the reality is that internet blackouts prevent fluid communication, between nationals and abroad, and not many images arrive from the context of the protests. In addition, one must refer to the attempts of the Burmese Armed Forces – known as Tatmadaw – to censor content related to criticism of the coup.

“What is worrying about this are the methods by which they the Army tries to suppress the dissemination of information“says Paing Aung, who narrates that those who try to record what is happening and share it on the Internet,” see their lives threatened “.”Videos have emerged of soldiers shooting people’s windows with live bullets for filming them“, the Mint.

Paing Aung also says that the Burmese Army is “active” on the social network TikTok lately. “The platform is being used as a means of delivering death threats to citizens“, he says, detailing that” the videos in which soldiers are seen showing off their weapons with the intention of shooting people in the head if they are going to protest have been a common trend (on the social network). ”

Regarding the role of social media, Paing Aung notes that, “Currently”, it is not aware of any “disagreement” expressed regarding the coup on these platforms., but he has been “sure” that “there is a very noisy minority that already supports the military’s agenda.” In addition, he reports, the Army intervenes in the media “actively.”

Burma’s ambassador to the UN, Kyaw Moe Tun, suffered the consequences of disagreeing with the coup. After convicting him and defending the deposed leader, the military junta that governs the country, led by Min Aung Hlaing, dismissed him for “not following state orders and instructions” and “perpetrating treason”.

Paing Aung, asked about his opinion of the role of the international community after the coup, considers that his position is “well articulated”, but “not effective”, although he warns that he is not an expert on the matter. “Honestly, I don’t think the international community is doing all it can to support“, he indicates, underlining that, in his opinion,” there has been no real action on the part of the UN or the European Union that has been able to deter violence and adequately support the cause. ”

“So far, the response of the international community seems to come from pure dialogueas members of the stakeholders seem to limit themselves to ‘condemning’ the violence without taking any further action, “he concludes. The United States will impose sanctions against the leaders of the coup in Burma, while the EU has already threatened to follow the same path. .