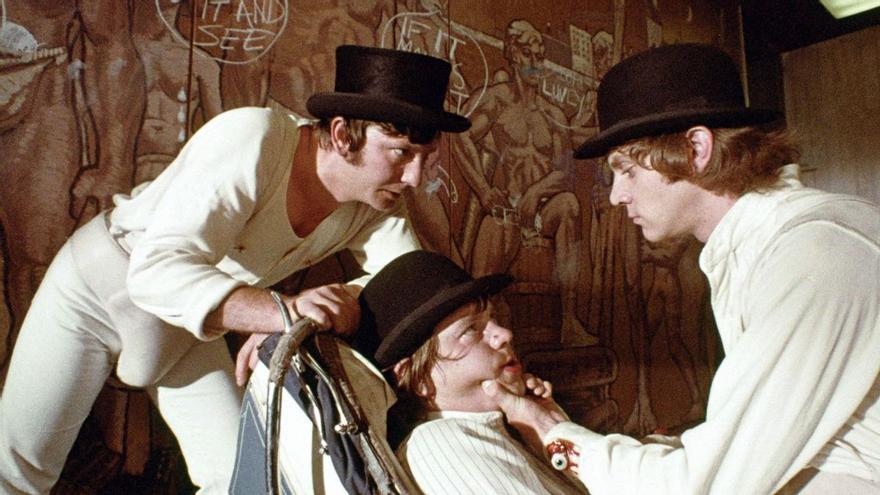 ‘The adventures of a young man whose main interests are violation, ultraviolence and Beethoven‘, read the promotional slogan of’ A Clockwork Orange ‘, thus anticipating the status that Stanley Kubrick’s ninth feature film would soon acquire: that of cult fiction, dangerous film, taboo work. It was banned for years in countries such as Brazil, Singapore, South Africa or Franco’s Spain, and in others it was accused of inspire waves of heinous crimes. In the 50 years since its world premiere (December 19, 1971) it has been emulated, parodied and incorporated into the genetic code of pop culture. His influence is seen in writers such as JG Ballard, Philip K. Dick, William Gibson and Chuck Palahniuk, and in famous fictions such as ‘American Psycho’ and ‘The Hunger Games’. Its protagonist is assumed to have inspired musical icons such as Ziggy Stardust and Johnny Rotten, and his aesthetic has been recycled by mainstream champions such as Madonna, Kylie Minogue and Lady Gaga. It is one of the films more times honored in ‘The Simpsons’.

Based on the eponymous book by Anthony Burgess, remember, ‘A Clockwork Orange’ focuses on a young sociopath named Alex DeLarge, who leads a gang of thugs fond of robbery, assault and battery and that, after being incarcerated for the murder of a woman, he undergoes an experimental Pavlovian treatment that is supposed to eliminate all his criminal impulses. Based on this premise, the film proposes a ironic reflection on free will and the mechanisms of state control about the individual that is perfectly summarized in its most famous sequence, in which Alex is forced to contemplate with wide eyes images of sex, violence and Adolf Hitler.

Beyond the frequent moments of brutality that his footage includes, what mainly gave him his power of seduction and his immediate cultural impact was the concept of dystopian future devised by Kubrick, based on the aggressive combination of visual effects, a scenography supported by brutalist architecture and sexual imagery both in the costumes and sets and a soundtrack full of futuristic versions of classics by Beethoven, Purcell and Rossini by trans composer Wendy Carlos. The interpretive work of the actor Malcolm McDowell, a waste of insolent charisma even when – especially then – his character sings and dances to the song ‘Singin’ in the rain ‘while beating a partner or when, at the end of his adventures, he practices wild sex in front of an audience of onlookers dressed as members of the court of Louis XIV while exclaiming: “I was cured well!”.

“A Clockwork Orange” first hit theaters in the United States, where Kubrick was forced to cut 30 seconds of footage to avoid the X rating and thus reach a greater number of theaters; the stir caused by its premiere was quickly mitigated a couple of weeks later, when the Hollywood Academy included its full version among the titles nominated for the Oscar in four categories, among them Best Film and Best Director.

In Britain, by contrast, the controversy went far beyond angry debates in press between defenders and opponents. The newspapers were filled with letters from readers who claimed to have been harassed on the streets by “burly young men dressed almost exactly” like Alex and his henchmen, and various police and court reports identified the film as the source of inspiration for a whole series of murders, rapes and acts of vandalism. In early 1973 Kubrick demanded that it be removed from British cinemas, in part because of the death threats he and his family were subjected to because of it, and he continued to prevent it from being screened in the country, his adopted home. , until his death 26 years later.

Today ‘A Clockwork Orange’ continues to raise questions about the fuzzy distinction between violence illegally exercised by the individual and that sanctioned by the State, on the moral responsibility that artists must – or should not – assume through their works, and on whether watching films that explore the darkest aspects of the human condition give us becomes accomplices of violence that prevails in society. Its retrofuturistic aesthetic, moreover, continues to be a benchmark. If, despite this, it is often considered the worst aged of all its director’s films, it is because, inevitably, its capacity to shock, scandalize and enrage has faded. Five decades later, nestled in the catalogs of video-on-demand platforms, it has undergone a conversion similar to that suffered by its own protagonist when his propensity for violence and crime is conveniently inhibited.