Luis Sánchez Parejo is surrounded by technology for his work as an illustrator for the newspaper The world, although at the same time it torments him to be aware that he is at the service of companies like Google. He wanted to reflect this reflection in the exhibition A happy world, which will be in the basement of the Cervantes y Compañía Library until August 28. His techniques cover different formats such as drawing, photography, sculpture or animation, which is why the show has included three video installations. The plays guide viewers into their brains through dark works that are brought down with a tone of humor.

The nexus between the works is both cultural and technological alienation and also fragmented attention. “We are a thousand things at once and subject to social networks and technology. We don’t pay attention to anything, ”says the artist. The featured piece is titled A happy world, showing an animation of a skeleton looking at a cell phone while a hamster is spinning in its head. With it, he wants to convey that people are hooked on mobile phones and time passes without them noticing. “We give all of our data to Google, Facebook and other companies and we allow them to control our privacy. Perhaps the most representative work is the barcode of a fingerprint ”, he assures. Another illustration simulates a house full of ears that Parejo relates to the virtual voice assistant Siri or Alexa. “How many times have you talked about something and suddenly you find ads on your mobile. In the end they know more than your mother, “he says. 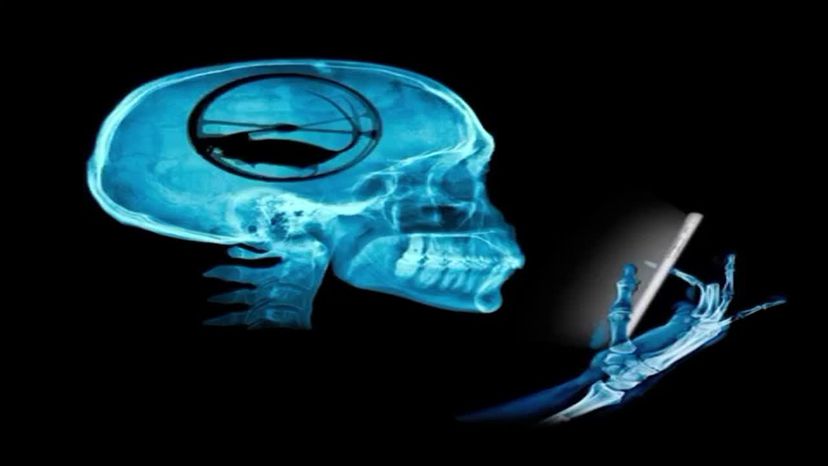 The artist says that the exhibition arose thanks to his dachshund named Manolo: “He ate a ball and left it lying. It occurred to me to put an eye made with silicone and make an animation like it is trapped inside ”. Luis Martínez, film critic, considers that this video installation reflects the germ of the show: “The sinister lurks from anywhere. He watches us to warn us of the daily fear that always haunts us. A backhand blow and the world is turned into a nightmare ”.

The title of the exhibition, A happy world, winks at writer Aldous Huxley. “It’s perfect because the works are dark, but I treat them with irony. It is not happiness, but a disaster that you find here, ”says Parejo, who admits influences from pop culture and surrealism. He wants the visitors to be surprised and put themselves in his place to understand the works, but he does not forget the glimmer of humor so that they do not generate rejection. One of the darkest reflects on the Christmas holidays. “I always give out to my friends christmas on those dates like the one I have exposed. I am a bit like El Grinch with Christmas and I want to talk about what those days mean when you have to see people you don’t feel like, toast as if it were your last day and consume ”.

To contrast that touch of tension and darkness, each of the images has a code QR where you can hear comments from some of your friends as if it were an audio guide. “A Martian but very interesting thing has remained. 20 people have participated sending writings and they were all delighted to do so. The grace is that it does not have an academic character, but their opinions on the works. They are no longer just my ideas, but those of more people ”, Parejo explains. His partner from the newspaper Maite Vaquero is in charge of giving voice to these texts with a museum tone.

Parejo has already exhibited on another occasion in Madrid. When he turned 40, he had a bad time and decided to do the Camino de Santiago by bike to meet again. During the journey he took several photographs and it occurred to him to introduce paranormal objects such as UFOs, Godzilla or forest dwarfs. “So I created a series that I showed on Russian Steak. All very surreal, but that many people liked ”, says the artist who adds that some 50 people took some of his illustrations. That is something that comforts him not only for the economic part, but for thinking that someone is going to have it in the living room. On this occasion, the works are on sale again with a price between € 100 and € 200, with the exception of the skeleton animation that gives title to the exhibition that costs one million euros: “I know I’m not going to sell, so I have given myself the luxury of setting that price ”.