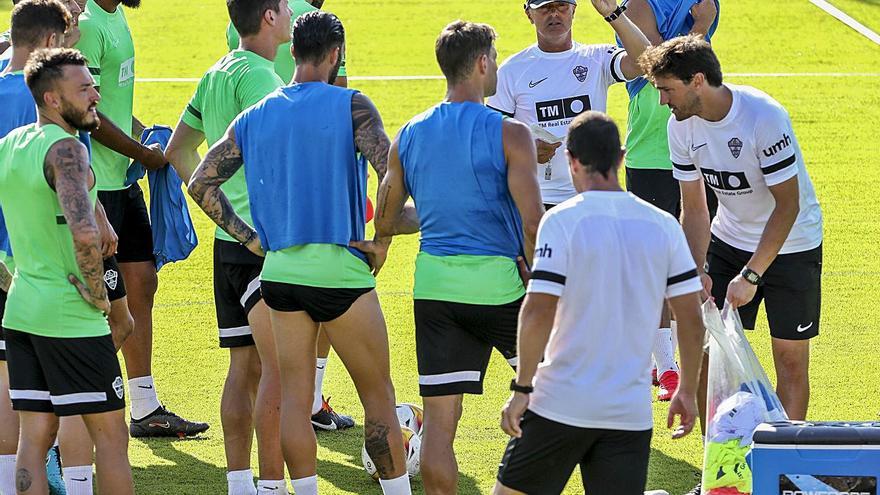 After two consecutive away games, in which Elche has lost two against Villarreal (4-1) and Real Sociedad (1-0), Fran Escribá’s team begins this Sunday (14 hours), against Celta, a demanding month of October, which will mark a good part of the future of the franjiverdes in the League and will define their aspirations to face a championship without as much stress as last season or, on the contrary, to suffer again to be able to maintain the category.

In the next four meetings, the people of Elche will face four rivals from the so-called of their particular league and whose main objective is to continue in the First Division. In these clashes, the results increase their level of importance in the face of the particular goal-average before a possible tie on points at the end of the championship.

The first of them will be against Celta. The people from Vigo did not start the competition well and the agonizing victory (1-0), in the extension time, last Monday against Granada allows them to catch some oxygen and place themselves in the thirteenth position of the classification, with seven points, one more than Elche.

The team trained by Eduardo «El Chacho» Coudet, which is represented by the largest shareholder of the Elche club, Christian Bragarnik, will arrive at Martínez Valero with the aim of achieving a victory that will allow him to make a difference with the franjiverdes and move away from the positions of decline. On the other hand, if Escribá’s team is able to achieve its first victory at home, it would surpass them in the table and would be placed in a quiet area of ​​the classification.

Hence, as Omar Mascarell said, “the match against Celta is key to face the rhythm of the season. We play for Martínez Valero with our fans and we have to see it as a final. The only thing that is worth to us is to add the three points and we will go to death for it ».

After the clash with Celta, there will be a 15-day break for international team matches. The League will not resume until Sunday, October 17 (2:00 p.m.), which will be when Elche visits Vallecas to face a newly promoted Rayo, who has become the revelation team of the championship in the first seven days.

Andoni Iraola’s team won (3-1) in their last match against Cádiz and occupies a surprising fifth position, with 13 points. Despite this, his objective continues to be permanence and he is called to be a direct rival of the people of Elche.

Espanyol, another recently promoted, will be the next team to visit the Martínez Valero stadium on the weekend of October 23-24 (the schedule has not yet been set). The Catalans are fourteenth, with six points, the same as Elche and they also have salvation as their goal.

The competition will have a new week-long day on October 26, 27 and 28. The whole of Fran Escribá will have to visit Alavés. The Vitorianos, who were already direct rivals of the franjiverdes last season and both escaped relegation with difficulties, got their first victory (1-0) of the season last Saturday, after imposing brilliantly, Atlético de Madrid in Mendizorroza.

Calleja’s team released its points locker, they add three and is penultimate in the standings. Although this prestigious triumph should raise the morale of the babazorros for the following days.

In today’s football, the phrase “Cholo” Simeone of going “game by game” is more and more coined. But if Elche is able to score a good number of points in the next matches against direct rivals, it would take a giant step forward in its fight for permanence and allow us to see the future in a different way. In addition, as Lucas Boyé acknowledged in an interview with this newspaper, being in the lower zone of the classification all season, with the sword of Damocles of the descent above the head, causes enormous tension and wear, and does not allow footballers be released to show their best game.

After the cataract of games against teams that fight for the same goal, the franjiverdes will face one of the games marked in red when the calendar came out. The team from Elche will end this demanding month of October with a visit to the Martínez Valero stadium by the current leader, Real Madrid. A shock that many fans are waiting for after not being able to enjoy it last season due to the covid-19 pandemic.

Get strong at home

Another objective that Elche has to try to achieve this October is to become strong at the Martínez Valero stadium. Normally, the teams that do not struggle throughout the championships are the ones that tend to turn their fiefdom into a stronghold.

So far, the franjiverdes do not know the victory in the Elche coliseum. In the league premiere they tied (0-0) with Athletic Club de Bilbao. In their second home match they also achieved the equalized (1-1) against another prestigious rival such as Sevilla and in the last stake at home they could not go beyond the draw (1-1) against Levante, another of the teams called to be a direct rival of Elche in this championship.

If during this month of October, Escribá’s team is capable of defeating Celta and Espanyol, it would already be an important step in the long way towards achieving permanence in the First Division.

The squad returns today to the pending work of Boyé

The Elche squad enjoyed a rest day yesterday and returns to training today, starting at 10:30 in the morning, at the facilities of La Finca Golf Resort in Algorfa. In principle, it is the day chosen for Lucas Boyé to begin to progressively join the group and see if he can be against Celta.