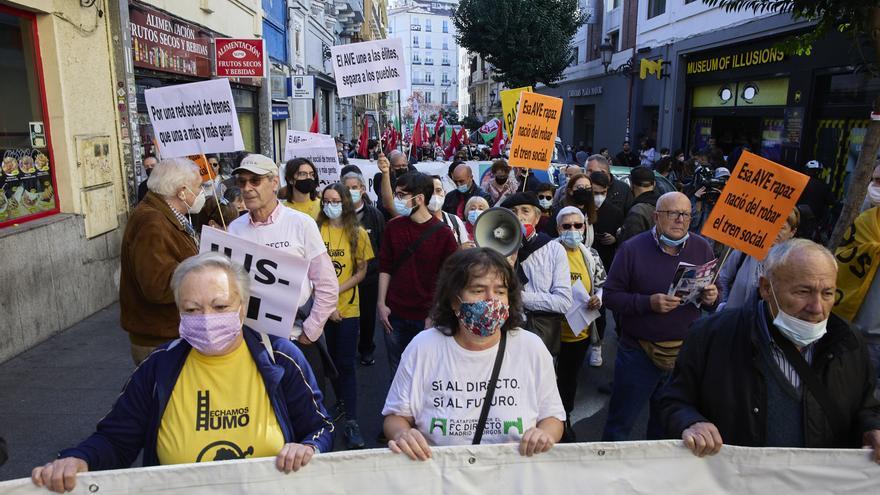 Hundreds of people have demonstrated in Madrid this Sunday, International Climate Change Day, to demand that the Government undertakes a “radical turn” in its transport policy and demand a “public and social” railway network that “vertebre” the territory of Spain and “cool the planet” in the context of climate change.

“Less AVE and more regional” and “whoever governs the public defends himself” are some of the proclamations launched in this demonstration called by the State Coordinator for the public, social and sustainable train; Alliance for the Climate; Rebellion for the Climate and Youth for the Climate, with the support of dozens of social, trade union and political organizations, such as United We Can.

Galicia, Catalonia, Cantabria, Asturias, Castilla y León, Castilla-La Mancha, Extremadura, Valencian Community, Aragon, Region of Murcia and Andalusia are the points from which the participants of this march have come -5,000 according to the organization and 4,000 according to the Government Delegation- that has passed from Tirso de Molina to Atocha.

Performances throughout the country

The spokesperson for the aforementioned State Coordinator, Jose Luis Ordonez, has explained to the media that throughout the week there have been activities and actions “throughout the territory” of the country, which culminated this Sunday “with a unitary state demonstration to try to make the government” of the coalition of PSOE and United We “turn its transport policy in a radical way.”

They ask, well, that the train “occupies its rightful place in these moments of ecological transition and climate emergency “, since the railroad, the bicycle and the journeys on foot are the three” fundamental “means in this situation, while aviation, the ship and the road should be” complementary “, which” is practically universal in Spain”.

“One of the things that has caught our attention the most about the Government’s decisions has been that in the pandemic, at the time of confinement, while Germany maintained all rail services, especially commuter and regional services, here it is they withdrew, they left very few trains and in fact the railway service that existed before the pandemic has not yet recovered, “Ordóñez also stressed.

He has pointed out that “at least” that situation should be reestablished, but also “we must increase the commuter services and even open commuter networks in places where there are none “, such as Córdoba or Valladolid, because in those areas also” there is a need for mass transport of people to be able to go to work and study. ”

A man wears a traditional cap of the head of a train station, in a demonstration that claims the railroad as a means of transport. EP

Lilith Verstrynge, Secretary of the United We Can Organization, said before starting the march: “We believe that a country that boasts of its high-speed train and that takes its chest out of the high-speed train also has to respond to the conventional train, which is the one used by 95 percent of the users in our country “.

“It cannot be that we bet on the high-speed train that in the end benefits or serves the business and let’s say the commissions of certain representatives of the state and certain businesses of political friends, and while the whole of the Spanish population does not have the a way to structure the territory and unite from Asturias to Extremadura to Galicia “, has commented Verstrynge, accompanied by the deputy Juan López de Uralde, the spokesman Pablo Fernández and the Minister of Consumption, Alberto Garzón.

Thus, It was “important” for United We can be in this mobilization, because “one of the main axes” of training “for the next two years will also be to listen to those demands and those claims made by the rural world,” he added.

Both the Secretary of the United We Can Organization and Pablo Fernández have been asked about what happened around Alberto Rodríguez, but they have agreed to point out that today is “the time to talk about all the problems that emptied Spain has” and that there is ” many sites to be able to speak “of that subject” in the next days “.

For his part, Juan López de Uralde stressed that “despite international negotiations, despite governments, despite laws, it is essential that society mobilizes to achieve this objective of not exceeding temperatures above one and a half degrees and there is no better way to do it than by defending sustainable mobility “, because transport is” at this moment the sector that is increasing its polluting emissions the most. ”

The protest has concluded in front of the Atocha station, where a manifesto has been read to list the claims and in which the organizers have censured that “the successive governments” of the PP and PSOE “have carried out a transport policy oriented” to their “privatization”, allocating “huge amounts of money to the construction of high-speed lines”, which have a great “environmental and energy impact” and have promoted the “isolation” of rural areas.