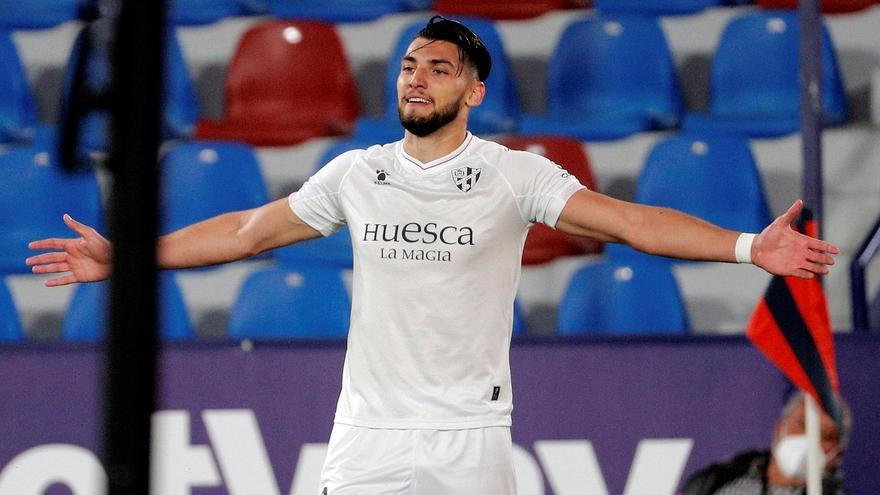 Two goals from Rafa Mir, one in each period gave a deserved victory to Huesca in Valencia against a Levante without mordant and that allows the Alto Aragonese team to dream of permanence.

Huesca hardly attacked, but He handcuffed his rival to perfection, to whom he gave the ball, but which he controlled territorially in a clash in which the local team never had enough clarity of ideas to have options to win the match.

Both teams raised the game with three centrals and two men who tried to be deep on the wings, but neither succeeded in the first half and the defenses had no problems to overcome the rival attack with the exception of the play of 0-1.

Levante took the initiative in the first stages of the match, but their approaches to the rival goal were timid and without creating hardly any danger, but before either of the two teams imposed their law on the field of play, a good cross from Ferreiro allowed Rafa Mir to make it 0-1 on the scoreboard.

After the goal, Paco López’s team assumed the role of dominator, but without finding the spaces that his style of play usually generates both due to their own inaccuracies and the good approach of the Huesca team, who neutralized their rival with some comfort thanks to a good disposition on the pitch.

As the first half progressed and with little participation from the key men of the Valencian team, the local footballers were more incapable of approaching Huesca’s goal with authority, although there were another couple of timid arrivals in the final bars.

The team of Pacheta, for his part, he was focused on controlling the rival, but he reached the break barely approaching the goal of Aitor Fernández, who did not have to participate in any offensive action by the Aragonese team.

Levante was unable to overcome the pressure of Huesca in the initial stretch of the second period and the first time Huesca did it they recovered the ball on the edge of their own area and in a quick counterattack, a pass from Seoane to Rafa Mir led to the 0-2 in a magnificent shot from the front center of Huesca.

The ball was from Levante, but his football was nondescript against an opponent who was waiting for him well positioned and who recovered the ball with some ease. The game that Huesca wanted was played. although increasingly closer to your area.

Paco López tried to amend the deficiencies of the team based on changes, but the team did not have their idea both due to their own shortcomings and because of the intelligence with which Huesca faced the crash.

In the end, the visiting team even approached with some option to the goal of the Raise, which, for his part, never gave the feeling of being able to unsettle his opponent.

Also Read  Mario Vaquerizo: “It is an absolute gift with my just turned 47 years old” | Madrid

Referee: Figueroa Vázquez (Andalusian committee). He admonished Son and Rochina for Levante and Pulido and Seoane for Huesca

Incidents: match played at the Ciutat de València stadium without an audience.