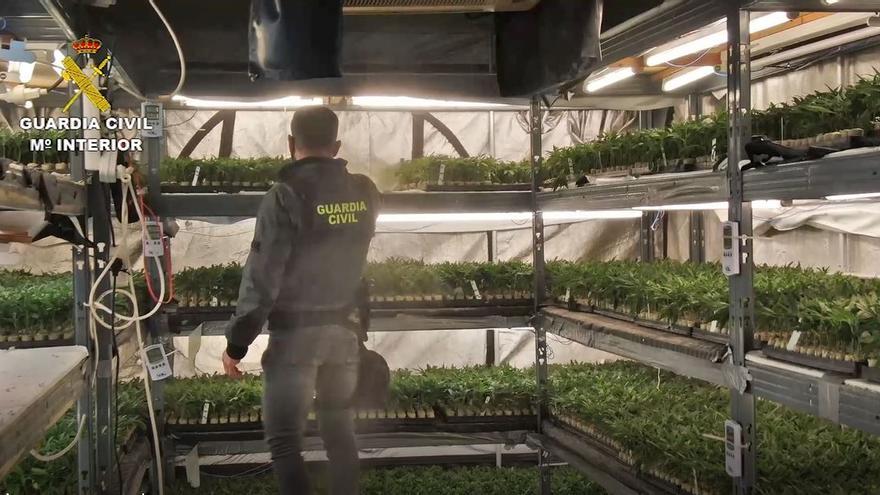 The Civil Guard has arrested in Onil and Muro de Alcoy the six members of a criminal organization that had specialized in the cultivation of marijuana plant cuttings, which were sold, in turn, to other different criminal organizations, which used these cuttings for produce marijuana in large plantations. This operation has been the consequence of a previous one, which resulted in another seven detainees, last June 2020.

On Tuesday, October 27, the Crevillent Civil Guard Investigation Area, with the support of members of the Onil Civil Guard, detained the six members of a criminal group dedicated to growing marijuana cuttings in that town. The cuttings were later sold to other groups that used them to start the cultivation of large plantations. This modality allows to shorten production times and get a better performance from each plant.

One of the main characteristics of this organization was the meticulous discipline followed in their criminal activity and secrecy regarding information that could affect the success of their work.

Their way of acting consisted of renting single-family homes, in sparsely populated areas, thus staying away from urban centers, with the necessary tranquility to carry out their activity.

The houses were conditioned to house the marijuana cuttings plantations. When these reached the necessary maturity to develop a plant, they were transported and sold to other criminal organizations.

Thanks to the investigation, it has been possible to locate the two houses that were currently being used by the organization, both in Onil. In one of them, the one dedicated to the cultivation, production and sale of cuttings, a total of 20,000 cuttings were sold weekly, with a unit price of 2.50 euros. In the second of the houses, it was where the marijuana buds, already obtained from the mature plants, were dried for their subsequent packaging and distribution.

The addresses had a advanced video surveillance system and, in addition, people were hired to act as “guards”, who were even provided firearms from illegal sources. The guardians were in charge of both the care of the plantation and the protection of the house itself, in the face of the possible intrusion of people outside the organization (such as “dumping” of drugs by other criminal groups, for example) .

The considered as the Leader It was the criminal organization who was personally in charge of locating and renting the houses in which, later, the different plantations would be installed. Once in operation, he frequently visited them to supervise the production, accompanied by his wife, also detained.

One of the members, the leader’s most trusted, was in charge, together with his wife, of growing the cuttings and making marijuana for distribution. They also carried out the transport of the merchandise to the buyers and, on occasions, even replaced the leader in the control and supervision tasks.

The fifth person arrested is a woman who lived in one of the rented houses to grow marijuana, as she was in charge of the plantation.

The sixth and last detainee was in charge of the custody of the other of the plantations.

The six detainees, of Dutch and Cuban nationalities and aged between 26 and 51, are charged with the crimes of belonging to a criminal organization, against public health, money laundering and fraud of electricity.

They have already been made available to the Court of Instruction number 1 of those of Elche, entering two of them in prison (those considered leaders of the plot) and the remaining four remaining on provisional freedom with charges, with the prohibition of leaving the country.

The origin of this operation, which has been carried out during the last four months, is due to a previous operation, which culminated in June 2020 with the intervention of 4,000 marijuana plants and 80 kilos of buds, already packaged and prepared for their imminent distribution to different European countries and with the arrest of 7 people, of Lithuanian, Albanian and Polish nationalities.

It should be noted that, thanks to this operation, it has been possible to dismantle the largest point of sale and cultivation of cannabis sativa cuttings nationwide leaving, in turn, without supply to other organizations dedicated to the cultivation of marijuana and its subsequent trafficking.

Agents of the Citizen Security Unit (USECIC) of the Alicante Civil Guard Command detained yesterday afternoon, for their part, two men aged 43 and 29, of Swiss and Moroccan nationalities, respectively.

The agents were conducting a control on the A-7, pkm 545, near the town of Benferri, in order to verify compliance with the mobility measures recently decreed in the community.

When opening the trunk of the vehicle, the Civil Guards found inside it a total of 898 marijuana plant cuttings.

The two occupants of the vehicle were arrested for being the alleged perpetrators of a crime against public health, for cultivation and production of narcotic substances.

Arrested with marijuana cuttings in the trunk