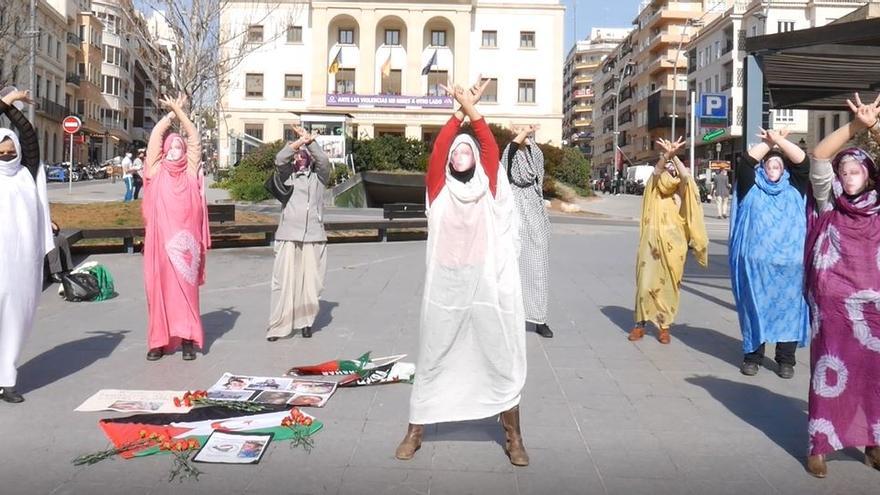 On November 13, Morocco broke the Ceasefire in force since 1991 between Morocco and the Polisario Front under the auspices of the UN, by intervening in the demilitarized zone of Guerguerat to dissolve a peaceful Sahrawi demonstration. Following this violation, the government of the SADR (Sahrawi Arab Democratic Republic) decreed a state of war and the resumption of the armed struggle after 29 years of waiting for the holding of a referendum on self-determination in Western Sahara, which today today has not yet been held. During these three months of war, the repression by the Moroccan occupation forces against the Saharawi population living in Western Sahara has intensified and multiplied. In occupied cities, the human rights of men and women are violated on a daily basis.

To give an example, Sahrawi activists are kidnapped, tortured, imprisoned and tried for the simple fact of being one; This is the case of Ghali Bouhala and Mohamed Nafaa Boutasofra, two young Sahrawis who are being held and will be unfairly tried for false accusations. Especially unfair, denigrating and reportable is the case of the activist SULTANA KHAYA and her sister, who have been held in their home, under house arrest, since last November 19. In recent days, harassment and repression have increased, and the officers have beaten Sultana and her sister on several occasions, causing serious head injuries, and have again prevented them from receiving visitors.

The treatment received by the Sahrawi population is intolerable, especially bloody are the humiliations suffered by Sahrawi women by the oppressors. Faced with such serious events, PULSO (United Platform for the Liberation of Western Sahara) has carried out a protest action in four Spanish cities to energetically CONDEMN the resurgence of violence and oppression in the occupied territories of Western Sahara and DEMAND the Government of Spain and the international community, to intervene directly on the ground through the competent bodies.

In Madrid, Alicante, Santander and Xirivella, a large group of Sahrawi women and pro-Sahrawi activists have demonstrated in front of the Ministry of Foreign Affairs, the Government Delegations and the City Council, to show their most absolute rejection and condemnation of the attacks that in activists Sultana Khaya and her family are suffering in the last days in the occupied city of Bojador. Dressed in traditional Saharawi clothing and wearing Sultana masks with a beaten face, they have wanted to stage the horror and terror that Sahrawi women who live in Morocco-occupied Western Sahara suffer daily, without freedom of movement, expression and suffering continuously rape, humiliation, mistreatment and violence of all kinds. Lying on the ground they have symbolized the repression suffered by the Saharawi population, especially women activists such as the Khaya sisters.

With this action, PULSE: