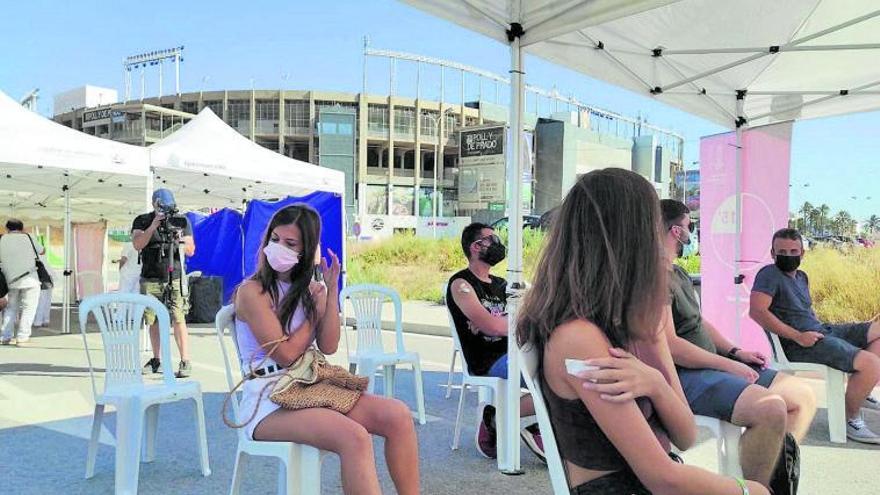 Elche CF fan getting immunized before the game. | MATÍAS SEGARRA

Those who came to the scene did so at around 4:00 pm and eager to “win the battle against the virus.” In a matter of minutes, fifty people were lined up, ready to proceed with the immunization. “What better place to get vaccinated than in front of the football stadium in my city,” said a young man who minutes later was cheering on Elche.

On the other hand, within the mobile point enabled by Health there were 20 Primary Care health workers, maintenance personnel, an ambulance and Carlos de Gregorio, Medical Director of Primary Care and coordinator of the vaccination team.

The forecast was to inoculate first doses of Pfizer to anyone who had not started their vaccination schedule and came to the point when they were over 12 years old, but people who were waiting for their second vial also arrived. “We are inoculating mainly with Pfizer, but we also have Moderna in case someone needs a second dose with this vial,” Gregorio reported.

“This has been a pilot experience in the field of vaccination, since it is the first time at the national level that we go in search of the population instead of summoning them in a closed space,” said the medical director. In addition, he assured that during the afternoon of yesterday they would proceed to vaccinate everyone who arrived. “Anyone who comes and wants to be vaccinated will be welcome. Our goal is to bring vaccination closer to the public, ”stressed Carlos de Gregorio.

On the other hand, the person in charge affirmed that the objective of choosing a football match as an aperitif before the vaccine is to reach the age group between 20 and 40 years old who have lagged behind vaccination.

Likewise, the coordinator wanted to influence the good reception that the initiative was experiencing, since during the three hours scheduled to vaccinate more than a hundred people attended. Thus, the health workers were also enthusiastic about the reception of the event, and assured that they were sufficiently prepared to attend to everyone who arrived.

The vaccination coordinator, Carlos de Gregorio, said that the Ministry is considering taking immunization to more mass events. However, the person in charge stressed that the first thing that will be done is to proceed with the evaluation of the results obtained yesterday.

“We must also take into account the amount of resources we have deployed to carry out this immunization and we will see how we can continue with these initiatives for the future,” said the person in charge. And he did not hesitate to defend the initiative that, according to the person in charge, “seeks to bring the vaccine closer to the public and facilitate a close and safe immunization to end this pandemic.”