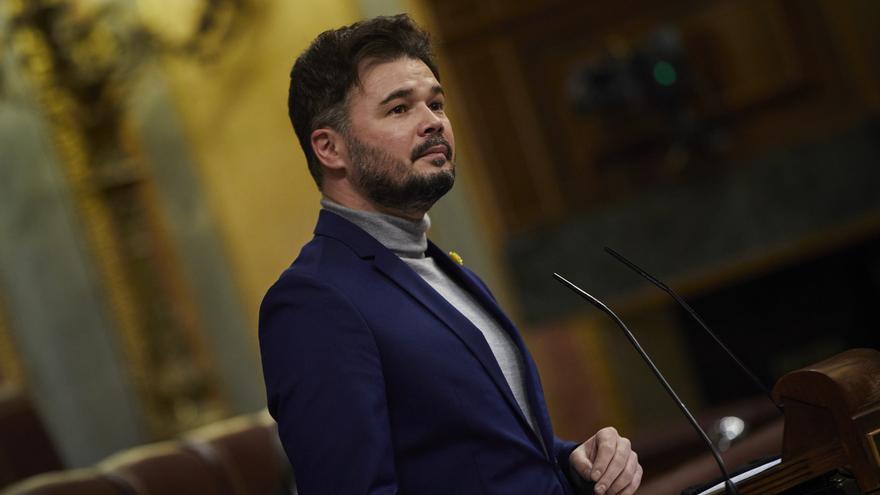 An attorney has filed a complaint in the Supreme Court against the president of United We Can in the Congress of Deputies, Jaume Asens, Y ERC spokesperson in the Lower House, Gabriel Rufián, for alleged crimes of libel and slander against the Crown for some Twitter messages about the current King and the emeritus.

The lawsuit, filed on March 5, is directed against Asens by a tweet published on the 2nd in which it alludes to the actions taken by the Catalan Prosecutor’s Office against the then president of the Parliament, Roger Torrent, and three other members of the Catalan chamber for alleged disobedience to the Constitutional Court (TC) for processing two resolutions in which the right of self-determination of Catalonia was claimed and charged against the King.

“They say that it is a full democracy when the monarchy can commit a crime with impunity and those who denounce it or who allow a debate on it in Parliament are persecuted”, wrote Asens on the social network.

For the lawyer, Esteban Gómez, “The ‘prima facie’ demonstration itself is already abusive and is an attack that cannot and should not be allowed”. In his opinion, “when the monarchy is accused directly, by a congressional deputy whose party is part of the Government, of ‘committing a crime with impunity’, the Crown is being accused of committing crimes, having to refer to whom and prove it, incurring his case in a crime of libel. ”

The complaint, to which Europa Press has had access, takes the opportunity to expand another from October 6, against Rufián. Initially, the lawyer sued the ERC leader for a Continued crime of insults to the King for statements he made on September 30 in the Congress of Deputies in which he said: “Unfortunately, Vox has 52 deputies here but in total it has 53, because it has one in Zarzuela.”

The complainant maintains that “Such statements are insulting and offensive against the King, as they would be if a judge had been imputed a certain assignment to a political party, a ruffian attack (according to the first meaning of the RAE of what a ruffian is) that, even if allowed by the President of the

Congress is neither fair nor humane, nor even convenient, in the Social and Democratic State of Law “.

He also denounced a tweet published on October 3 by Rufián in which he stated: “Today it is 3 years since the first official speech of Vox”, alluding to the one delivered by the King, Felipe VI, as a result of the independence referendum of October 1, 2017. “You could neither beat nor beat you could,” the Catalan deputy confirmed.

Already in the extension of the complaint, the lawyer has thrown in the face of Rufián another tweet of March 4 on a parliamentary initiative “so that they explain to the citizens why there is a family whose simple surname can live, steal and get vaccinated with impunity”. The lawyer understands that with this “criticism is abandoned to enter into slander” and that is why he also complains against the ECR spokesperson for a crime of slander.

The act in the judicial school

In that first complaint, the lawyer also addressed against the Ministers of Justice and Consumption, Juan Carlos Campo and Alberto Garzón, respectively, for pronouncements and actions related to the Crown.

He attributes an alleged crime of coercion to Campo for, supposedly, preventing Felipe VI from going to the delivery of judicial dispatches that took place on September 25 at the Judicial School of Barcelona, ​​in what he interprets as an excessive intervention of the Government in the functions of the Crown and “without any justification.”

In this regard, counsel argues that preventing the presence of the monarch in said act would only be justified for security reasons which in this case did not occur. Thus, he relates that “the Judicial School can only be reached by a detour on a road that (…) is surrounded by lush forest.” “In such a beautiful landscape we have spotted a squirrel that we do not believe would have aroused the fear of the most excellent minister,” he added sarcastically.

For the complainant, this alleged interference in royal functions “is based on a specific political interest: to demonstrate to the Catalan independence movement that the King will not exercise his work, assuming that the guarantor of the freedoms and rights of all Catalans with his mere presence ‘provokes’ “.

As soon as Garzón, accused of crimes of insults and slander to the King for a ‘tweet’ of September 25 in which he affirmed: “The position of a hereditary monarchy that maneuvers against the democratically elected Government, thus breaching the Constitution that imposes its neutrality, while being applauded by the extreme right, is simply unsustainable.”

The complaint considers that Garzón “is accusing the King of committing an act against the constitutional order and, therefore, of a blatant breach of his constitutional function, which is a notable insult.” “We can also deduce that a minister of the Government of the nation has accused the King of plotting a coup, a very serious slander,” he pointed out. Like Asens, the lawyer urges Garzón to “clarify” what he means when he talks about “maneuvering” against the Executive.