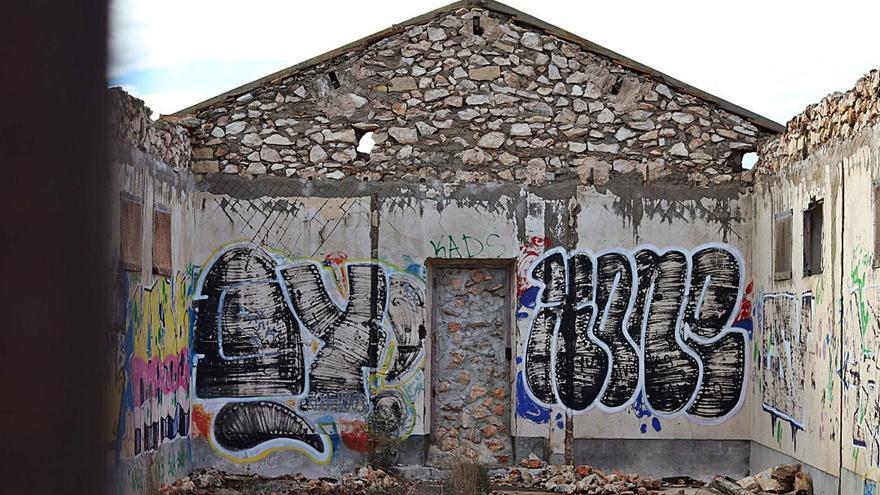 It was also clear then that the first phase could come in months to remodel the west pavilion, the largest, which during the Spanish civil war was a military supply area with showers, kitchen and lavatory. Only a few meters away are the cracks of what was a cistern, which now has several breaks and can be dangerous.

West pavilion full of graffiti and without a roof and, to the right, the cistern next to the east pavilion where the bricks have been detached. | JRE

The second phase projected the remodeling of the smaller officer’s cabin and the eastern barracks, used as dormitories for soldiers and workers from the Republican side. The project faded and not a stone has been moved from there in all this time.

The interior of these warehouses is a mass of rubble that was thought to become a point of environmental awareness. And that it was even included in the Natura Network, with interactive panels that served as a space to review the historical complex of the war, made up of the remains of anti-aircraft defense, bunkers or command buildings that are scattered throughout the mountains.

So, if everything on paper looked like a charming project that could give the area a tourist boost, why is it stagnant? In the previous mandate, the Department of Culture (managed by the mayor Anna Antón, from Compromís, who formed a quadripartite with PSOE, Esquerra Unida and Podemos) provided that the first phase, of about 60,000 euros, could be executed that year. The technicians requested a grant from Patrimonio, which ended up being granted months later, in August 2018.

Also Read  Dakar Rally: Carlos Sainz and Joan Barreda win in the dunes on the way to Hail | sports

A museum three years in the air

The subsidy did not cover even half of the first phase, but the amount could not be used because the municipal budget was not approved, and the item did not fit. In this new mandate, already with the PP in the government, the aid was requested again but it was not admitted, without transcending the reasons. Now this work will not be the highest cultural priority for the City Council, at least in the short term, and the new municipal budget continues to be extended.

José Pedro Martínez, mayor of the Treasury, points out that throughout 2021 they will include an «important» item to act in the archaeological museum «and if there is time throughout the year we will also carry out actions in the pavilions. We do want to maintain that action within the legislature, “he reviews. This newspaper has tried to contact the mayor responsible for Cultural Heritage on several occasions to find out her vision of the project, without success.

Santa Pola has been waiting since 2017 for the green light to be given to the declaration of Cultural Interest of 14 elements of military defense in the mountains, so that there is a greater degree of protection over the coast and antiaircraft batteries or the bunker, among others elements.