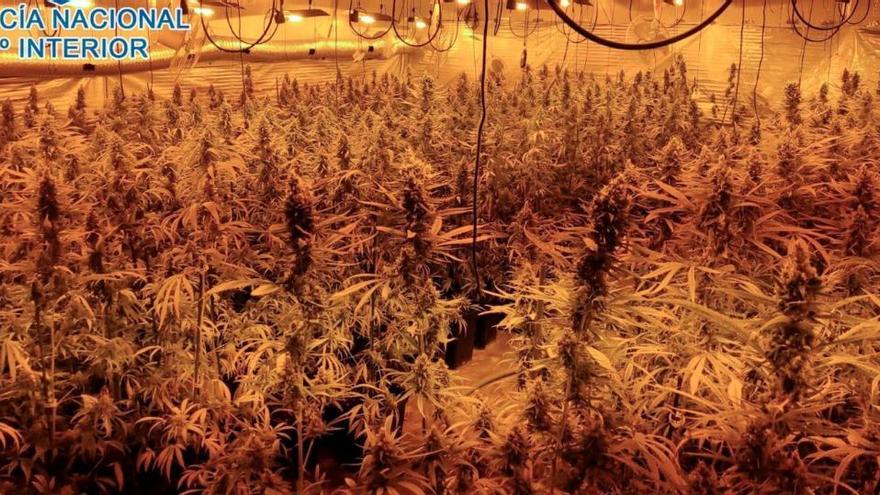 The Civil Guard, within the framework of the operation Huluxu, has dismantled in Seville an international organization dedicated to the trafficking of marijuana through transport companies, an action in which 20 people have been arrested, eleven of them in Spain and the rest in France, Italy and Poland in collaboration with the police authorities of these countries.

According to the Benemérita in a press release, some 235 kilos of marijuana have been seized, as well as two plantations, cash, abundant documentation, a blank manipulated for use with projectile ammunition.

The operation began in October, when it became known that it had been intercepted in Leipzig (Germany) a package with seven kilos of marijuana, whose origin was Seville and had a final destination in the United Kingdom.

On the other hand, the agents learned that another similar packet originated from the same address as the previous oneTherefore, after various investigations, they located the senders. These senders were two citizens of Asian origin, one of them being a minor. These people were intercepted in an ‘SUV’ vehicle, in which delivery notes for packages sent to France, Italy and Hungary that had been sent from the provinces of Córdoba, Granada and Huelva were found. In these packages 35 kilos of vacuum packed marijuana buds were found.

Later, the investigation focused on an industrial estate located in Seville, known as PI Carretera Amarilla, from where some of the packages departed.

The Civil Guard highlights that there are numerous shipments made by this network and that it intervenes during a time in which it focuses on the members of the network and find out that citizens of Spanish origin participate for sending the packages.

The members of the organization took numerous security measures when they carried the marijuana to the transport company, such as using two vehicles, previously rented with fictitious identities, to warn of the presence of police controls; as well as use different routes, or change direction for no reason.

They were supplied from different marijuana producers in the various Andalusian provinces. Some of these producers used a variety of marijuana that they grew in urban areas, since very little space was required as it was a small plant, and it produced a large amount of buds.

Once the plants have been collected, were vacuum packed and placed in boxes.

Shipments were made by transport companies in small batches. Its content was masked as catering, food or clothing utensils, among others. The first destinations were varied although among those apprehended by the Civil Guard were Holland, Italy, Poland, France, United Kingdom, Belgium and Hungary.

These countries, included in the Schengen agreement, They could be the final destination of the drug or serve as a transit to third countries. If it was not the last destination for marijuana, the recipients, including students, collected the shipment and placed a new sticker on the sticker with the recipient’s address, changing its destination and the package continued on its way.

From the analysis of all the information, it has been possible to know that the organization received and sent packages to 45 countries on five continents, documentation that is being analyzed and evaluated by the researchers.

Once the members of the organization and their role within it were known, the agents asked the court for new records in addresses and premises located in Seville capital, San Juan de Aznalfarache, Dos Hermanas, in Illescas (Toledo) and Villarubia de los Ojos (Ciudad Real). One of the searches took place in a restaurant located in the Carretera Amarilla industrial park, a place that served as a meeting place for the network.

In the records, abundant documentation, cash, tools for the packaging, weighing and concealment of the drug were found, as well as two marijuana plantations with 250 marijuana plants.

The operation, led by the Examining Court number 6 of Seville, It has been carried out by agents belonging to the Information Section of the Andalusia Area, and with the support of the Special Central Unit (UCE) 3, the Information Section of the Valencia area, Information Group of Cádiz, Ciudad Real and Toledo, as well as the Rapid Action Group (GAR), the Reserve and Security Group (GRS) and the Office of Analysis and Fiscal Investigation (Odaifi) of the Seville Command.