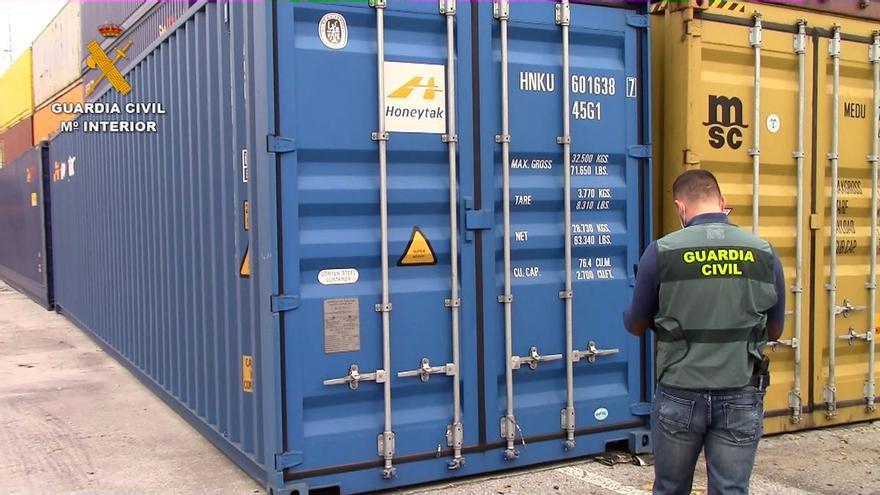 The Civil Guard, within the framework of the PINDAAN operation, has dismantled a criminal organization who was dedicated to irregular movement of plastic waste to Malaysia, Cambodia, Thailand, among other Asian countries. I know has investigated 27 people that constituted a network deployed in Spain to organize illegal shipments, among which they found 16,000 tons of this waste without decontamination and for which 15 million euros were pocketed.

The leadership of this organization was established in Malaysia and Singapore. The investigated objectives are a part of the international network that controlled this activity, deploying people in our country for the purchase of plastics and subsequent shipment to Asia.

Thank you for watching

Untreated plastics that can end up in the ocean

In 2019 the Malaysian government returned to Spain 5 freight transport containers loaded with plastic waste contaminated with toxic products coming from the intensive agriculture. After testing plastics remains of phytosanitary products were detected.

As explained by Captain Carlos Astrain, from Seprona’s Central Operational Unit for the Environment (UCOMA), the content did not correspond to the declared freight, according to the authorities of that country, concerned that Malaysia had become one of the main ports. discharge of polluting plastic waste.

But not only did containers with this waste from Spain arrive in Malaysia, but other countries such as Cambodia or Thailand also became a destination for this merchandise after China banned the import of non-recyclable plastic waste at the end of 2018.

The captain explains that, in general, it was non-decontaminated plastic waste and, therefore, that they contained the rest of toxic phytosanitary products because most came from intensive agriculture, that is, from greenhouses. As explained by Seprona, Most of the plastics contaminated with this type of toxin came from the area of ​​eastern Spain, including the Region of Murcia.

This unused matter, inevitably became waste, which many of the time they end up in illegal dumps, oceans and rivers.

Plastics ban in China since 2018

As a result of the Import Ban on Plastic Waste Established in 2018 by China, the businesses moved to other Asian countries, where they are received as a preliminary step to products that finally end up in the Asian giant. The different materials that arrive in these countries are treated in illegal facilities, many of them already dismantled, and then exported in turn to China as the final destination of the valued raw material.

Only in the investigated shipments 16,000 tons of plastics could have been moved, coming mainly from the Valencian Community, Murcia, Almería, to a lesser extent in Catalonia and more residual in Extremadura and León.

As the captain explains, These plastics are highly valued for their toughness and high density, but require a costly decontamination process that saves money.

As they avoided declaring it as waste, the organization avoided all kinds of prior notifications, authorizations and other paperwork for plastics that already in Asia were often turned into waste and ended up in illegal dumps in the ocean or rivers.

UCOMA agents analyzed the commercial and banking information of those investigated with the help of Interpol and verified the link between the organization in Spain and the head of this entire network, who was located in Singapore.

Also Read  Irvine Welsh: 'We are heading to an anarchist paradise where we play soccer and make love' | TV

Thus, the Civil Guard verified the deployment “ad hoc” in our country of the network whose mission was to acquire plastics and send them, while channeling the money that came from Singapore to customers in Spain, in a continuous transfer of foreign currency.

The investigated persons are charged with crimes Against Natural Resources and the Environment, for the illegal transfer of waste, and that of Belonging to a Criminal Organization.

The various European Union Regulations establish procedures and control regimes for the transfer of waste between Member States and with third countries, depending on the origin, destination and route of the transfer, the type of waste transferred and the type of treatment. to be applied to waste at destination. The objective of this regulation is organize and regulate the surveillance and control of waste shipments in a way that takes into account the need to preserve, protect and improve the quality of the environment and human health.

The Civil Guard, once again, fights environmental crime at its source.

The investigation, directed by the Delegate Prosecutor’s Office for the Environment and Urban Planning, has been carried out by agents of the SEPRONA of the Civil Guard.

It has also counted on the collaboration of EUROPOL and INTERPOL in the analysis of communications and in the strategic analysis of documentation to find possible relationships with other countries, currency movements and shipment information; as well as with the collaboration of the General Subdirectorate of Circular Economy of MITERD (Ministry for the Ecological Transition and the Demographic Challenge) in joint work teams aimed at studying the illegality of shipments.

Also Read  Michoacán: Rise up in arms to conserve the monarch butterfly forests