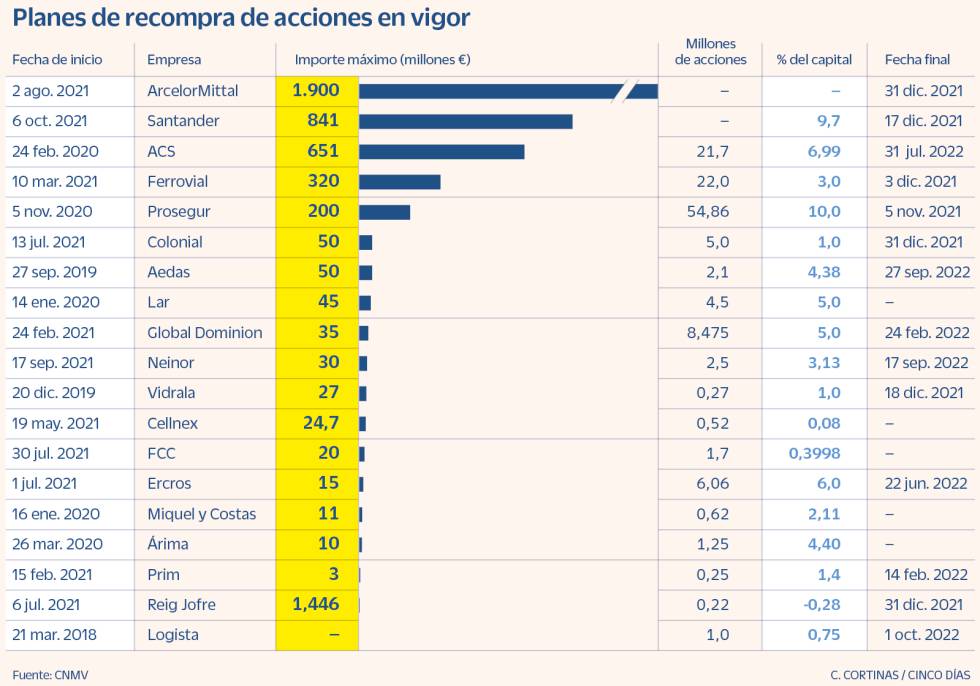 The economic recovery and the improvement of the income statements have allowed the return of dividends with force in part of the companies that suspended or canceled them last year. The share buyback plans of a large number of firms have also skyrocketed. Only in the Spanish Stock Exchange about twenty listed companies currently have programs to acquire their own securities for 4,200 million euros.

Of all of them, the most numerous is the one launched by ArcelorMittal, which seeks to restore the dilution to shareholders caused by the capital increase carried out in 2020 worth 1,825 million euros and distribute the money from the sale of its subsidiary in USA for another 1,880 million euros. The steelmaker plans to allocate up to 1.9 billion to buy back its own shares until the end of the year in the fourth program of this type carried out this year. After ArcelorMittal stands Santander, which since the beginning of the month has activated a plan to acquire securities for up to 841 million until almost the end of the year. The bank, which will allocate 20% of its net profit for the first half of the year to this operation, will buy securities at a maximum average price of 3.98 euros.

The election dividend that many listed companies have opted for this year has prompted ACS and Ferrovial to redeem their own securities to offset the dilutive effect of the scrip dividend. Iberdrola and Telefónica have also carried out this same operation. The energy company directed by Ignacio Sánchez Galán has acquired 15 million shares, 0.234% capital, in which it spent a maximum of 195 million euros. Meanwhile, the teleco registered in January the purchase of 5.12 million shares, from the scrip dividend paid in December of last year.

Also Read  "The three defeats affect us in the head, but we must be calm"

ArcelorMittal and Santander have the largest programs

BBVA will soon join this twenty stocks, including Prosegur, Colonial, Aedas and Lar. The financial institution is waiting to obtain green light to a program of purchase of own titles for up to 10% of its capital to which it plans to allocate a maximum of 3,500 million euros. The plan, which could start in November, is designed to be carried out in tranches and comes after the bank has recovered the dividend – yesterday it disbursed 533 million euros after paying € 0.08 gross per share – and the sale of its subsidiary in the United States for 9,600 million euros.

The repurchase of own securities is one of the formulas that companies use to reward their shareholders. It is very common in the United States, where it also enjoys a more favorable tax treatment than dividends, while in Europe there is a greater tradition in favor of the latter. In practice, it allows raising the earnings per share, since when buying shares in the market and later redeeming them (eliminating them), it tends to push up the prices, although the CNMV requires a defined repurchase plan.

Also Read  Is there a submarine over the Alicante Hospital?