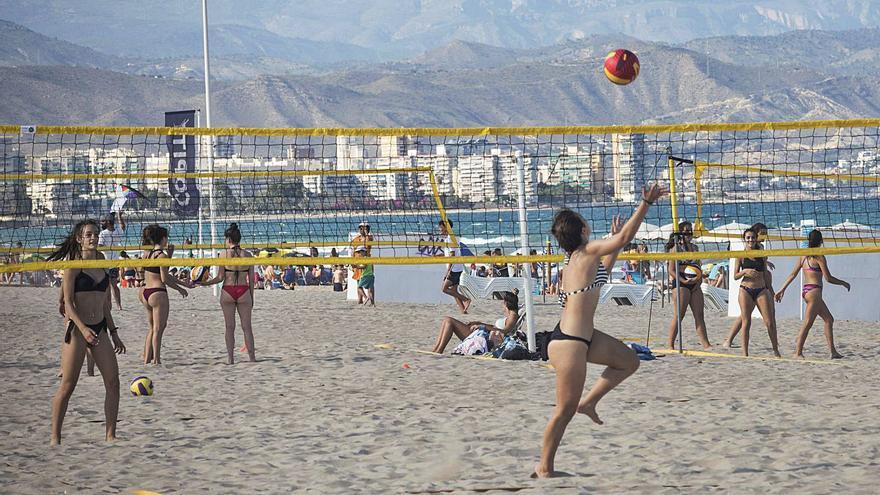 Gather a sports center on the sand in the same area of ​​Muchavista beach. This is the new initiative that the City Council of El Campello has launched to turn this sandy area of ​​the municipality into a benchmark for outdoor sports and that will complete the wide range of sports infrastructures already existing in the rest of the coast of Campeche.

To make it a reality, the Department of Sports and the Department of Beaches have worked together on this initiative, which has just received authorization from Coasts. The plan includes the construction of 24 beach volleyball courts, two beach tennis courts, two soccer courts and a new calisthenics area (a system of physical exercises with one’s own body weight).

“All the new tracks that we are going to build are official, they meet the requirements set by the different federations, since our objective with the creation of this sports area is to be able to host future events and tournaments in El Campello”, explains the Councilor for Youth , Sports, Festivities and Traditions, Cristian Palomares, who also emphasizes that this action, whose execution is expected to end in 2021, has been linked to the renovation of all the existing beach sports infrastructures in the town.

The new space will have a point to do calisthenics. In the image, the one located in Carrer La Mar. | PILAR CORTÉS

Thus, El Campello will have a total of 80 beach volleyball courts, two beach soccer courts, two beach tennis courts, as well as three calisthenics areas, four beach soccer games with eight goals, six beach basket baskets, “Which will help us become an attractive focus for athletes thanks to facilities that can be used by any citizen throughout the year for free.”

The idea of ​​choosing Muchavista beach for the creation of this open-air sports center arose with the pandemic “which confirmed the mission we have from the public administration to promote the practice of outdoor sports among citizens,” says the mayor sports.

El Campello will have two beach soccer fields. Both will have the official dimensions to host sporting events in the future.

In this context, the Campellero City Council has taken advantage of the wide sandy area in the Muchavista area to create a varied sports offer that “does not affect the space for bathers, since there is more than enough distance from the slopes to the sea.” The placement of the new infrastructures, whose material has already been purchased, will begin shortly and is part of a long-term project with which the town wants to attract and attract the celebration of sports tournaments. Something in which he already has experience, as evidenced by the celebration of the “International Open El Campello”, the event that will close the beach volleyball season in Spain in October with the best national and international players.

The initiative includes the placement of 24 official beach volleyball courts.

With the installation of the new tracks, the promoters of the initiative also want to boost the local economy, being convinced that the new space will attract athletes from the municipality itself and others, since the infrastructures will be free to use.

The space will have two beach tennis courts, a booming sport in Spain

For the laying of the courts, the City Council has had the collaboration and advice of experts such as the Muchavista Beach Volleyball Club and they have ensured that the new courts for all sports comply with the regulatory dimensions to be able to host official competitions.

In the coming months, municipal officials also contemplate the installation of night lighting in the Muchavista area for sports, as well as the placement of changing rooms for athletes or warehouses to store sports equipment of the campellero consistory itself.

The new Muchavista area will add a calisthenics area for exercise and bodybuilding.

This proposal is part of the objective of making El Campello a benchmark in terms of sports offerings and, in this way, making a name for itself at the national and international level when it comes to attracting sports tourism.

Rincón de la Zofra This space has a calisthenics area with: -Bar for chin-ups, -Crossing bar -Push up Bars / Low-rise horizontal bars In addition, it also has several beach volleyball courts for the use of citizens.

Along these lines, the City Council signed at the end of last year an agreement with the Association for the Promotion of Sports Tourism of Alicante to disseminate and promote the natural environment El Campello as an ideal setting for holding sporting events throughout the year, especially in disciplines related to the beach and the sea.

The commitment of municipal officials is to create and promote a sports tourism “cluster” in which public and private agents from the tourism and sports sector are integrated and interact. For the mayor of Sports of El Campello, “our municipality has as a differential point with other localities in our environment a coastline of 23 kilometers of beaches and it is something that we want and we must take advantage of to differentiate ourselves.”

Carrer la Mar and la Illeta Along the Carrer La Mar beach, up to the Illeta beach, there are several beach volleyball courts and an area with equipment for calisthenics and exercise.

Hence the importance of having infrastructures such as those that will be incorporated in the new sports center that is going to be launched in El Campello. “For us it is key to promote the creation of a structure that supports the capture of national and international events and competitions”, argues Cristian Palomares, while affirming that this line of work “will promote the socioeconomic development of the city”, promoting it as a tourist destination, of stay and promoting, at the same time, the seasonal adjustment throughout the year.