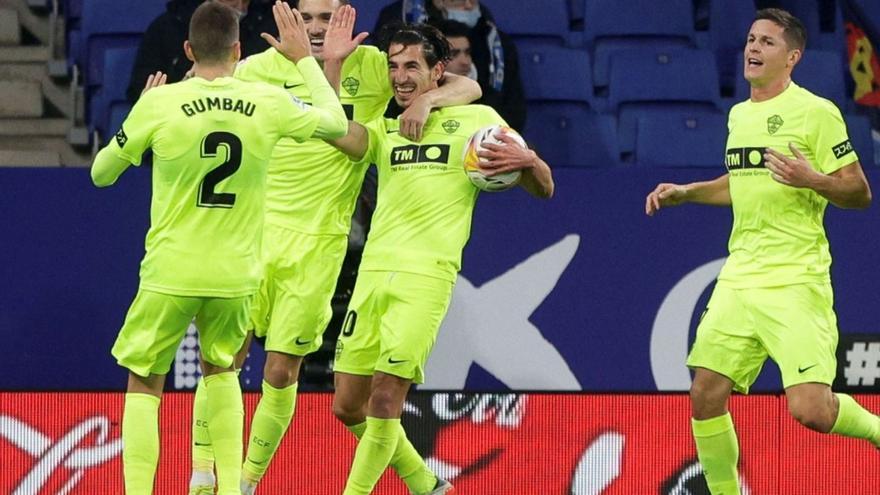 Last Monday’s victory in Espanyol’s field has meant more than three points for Elche. In addition to being able to get out of the relegation places, Francisco’s team has achieved a two-point cushion with the red zone of the classification, which allows him to face the final stretch of the hard It costs January in which he will have to face Villarreal, next Sunday (2:00 pm), at the Martínez Valero; and against Real Madrid, a week later, on Sunday January 23 (4.15pm), at the Santiago Bernabeu.

In between those two league stakes, the Elche team will face the knockout of the knockout stages of the Copa del Rey, also against Real Madrid, which still does not have a specific day and time. It is scheduled for Wednesday 19 or Thursday 20.

If the franjiverdes had not won at the RCD Stadium in Cornellà-El Prat they would have a very complicated outlook ahead, with the urgent need to have to score points before two rivals from the Villarreal and Madrid entities so as not to be sunk in the standings .

As if that were not enough, the victory against Espanyol also allows them to reach the first meeting in February with less pressure, in which they will receive a direct rival like Alavés, at Martínez Valero. If Elche is able to surprise in one of the next two league matches, it would transfer all the pressure to the Vitoria and, if they win, it could take a significant leap over the relegation positions, which would allow them to face other prospects the last phase of the championship.

But last Monday’s victory has not only allowed a quantitative push at the qualifying level. Also on a moral level. The improvement that the Elche team was showing since the arrival of Francisco has finally had the prize and the desired reward. Something that allows you to trust even more in the work that is being done.

Since the arrival of the Almeria coach, Elche has added seven points in five games. He began beating Cádiz (3-1), later he was about to add something positive in Mestalla against Valencia (2-1) and in Camp Nou against Barcelona (3-2). Both meetings marked by arbitration controversies.

The franjiverdes began 2022 with a meritorious draw against Granada (0-0), in a match in which they deserved more and had to play with one less man due to the expulsion of Diego González as soon as the second period began.

The game with Francisco had shown better feelings than points and, in the end, last Monday he found the prize he was looking for with the victory at home against Espanyol.

If in the League Elche is showing green shoots with the Almeria coach, in the Copa del Rey, without playing brilliant football, he has been able to fulfill the record of passing the three qualifying rounds against inferior rivals. First he eliminated Leoia (0-2), later Unionistas de Salamanca (0-1), in the worst game of the Francisco era; and last week they managed to overcome Almería (1-2), leaders of the Second Division.

Three rounds that have allowed the team from Elche to reach the round of 16 and have the possibility of playing a tie as attractive as that of Real Madrid is going to be.

The global count, between LaLiga and Copa matches, since Francisco’s arrival has been to achieve five victories, one draw and only two defeats in the eight games played.

Now, all that good image must continue to be ratified in points to try to reach the last League games without the stresses of last season in order to achieve the goal of remaining in the First Division in a much more comfortable way.