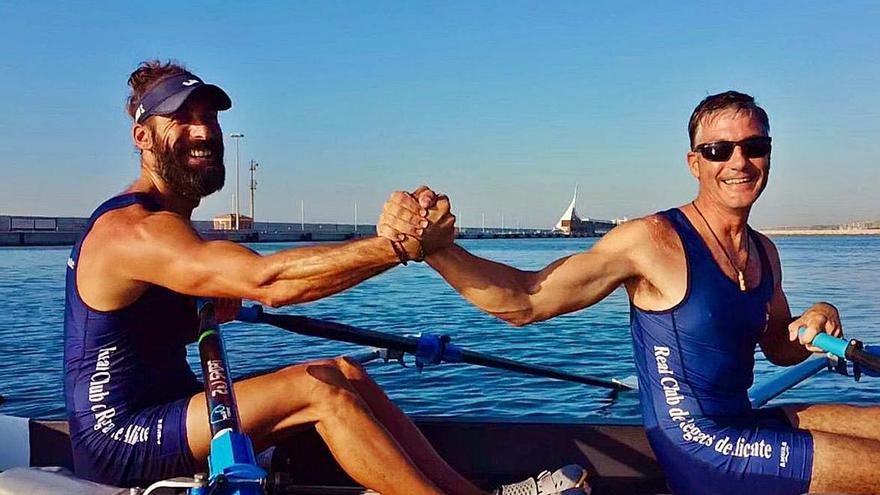 Athletes of the Real Club de Regatas de Alicante They have organized the first rowing crossing Alicante-Tabarca-Alicante to be held on September 18. An unprecedented adventure, a demanding challenge that has been driven by Javier López Requena and Fernando Sánchez, members of Coastal Rowing Alicante, with the collaboration of RCRA and the Rema Vida Association.

The journey to Tabarca, back to Alicante, is a real challenge for any rower and the organizers intend to establish the event and have it included in the regatta calendar of the Spanish Rowing Federation. This first edition will be non-competitive and will be attended by rowers from the Real Club de Regatas de Alicante, who will become true pioneers of a competition that has never been seen before in Spain.

Javier and Fernando, RCRA athletes and creators of the idea, made the crossing as a test in an adventure that tests the capabilities of any rower. “We left at 7 in the morning and at 9:30 we were almost on the island. We go around it, disembark for a little rest, and We headed back to the club. It was another three hours of fighting against ourselves, due to exhaustion. The mental aspect is very important in this type of test. But we succeeded and we verified that it was feasible to hold the event », explains Fernando.

From this day on, preparations began for the journey to become a reality. The Real Club de Regatas de Alicante has given them their full support and the event will be a true milestone for the city of Alicante. The rowers that participate will complete the tour in different boats, doubles and sea fours, with the full support of RCRA zodiacs and coaches. The Rema Vida Association, with its rowing team created in favor of the Fight against breast cancer, They have also joined this adventure and will make the tour, but leaving from Santa Pola.

Fernando Sánchez and Javier López Requena are convinced that, after this first non-competitive edition, the the Alicante-Tabarca-Alicante crossing with the approval of the Rowing Federation: «Our idea is that it has international participation and with teams from other countries. We have luxury sports facilities, a city fully adapted for the practice of sea rowing, an exceptional climate, a wide range of hotels and, above all, we are eager for Alicante to become a world reference in the practice of sea rowing. since we have everything we need, rowers, infrastructure, the Royal Regatta Club that supports us, and a lot of will and enthusiasm ».

A unique adventure to Tabarca by rowing

Javier López Requena has made sure that this first edition can be carried out financially.

«The positive surprise is that many companies and institutions have been interested and want to collaborate with us. It is a great adventure and everyone catches their attention and they want to be part of the event, “he says. The Alicante City Council, Banco Santander or El Corte Inglés have already confirmed their collaboration.

Javier and Fernando met at the Real Club de Regatas de Alicante three years ago, united by the Olympic rowing. Two years ago they formed a team to compete in the Maremagnum Cup in Barcelona, an annual regatta that already has six editions held, and they won the gold medal with their boat competing for the RCRA. This great sporting success was the seed that has germinated in the creation of the First Rowing Crossing Alicante-Tabarca-Alicante.