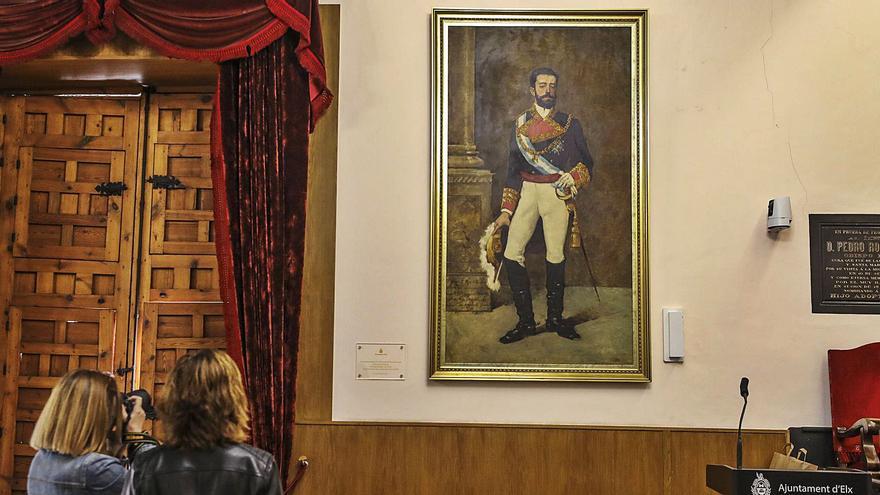 At the time of his visit, according to the documentation that can be found in the municipal archive, Amadeo de Saboya was traveling in Alicante when they told him about the wonders of the Elche Palmeral, so he decided to take a 24-hour tour. «He was impressed by the picture of the palm trees from one of the upper terraces of the basilica. It must be taken into account that at that time the extension of the Palm Grove was greater than the current one, since it surrounded the entire territory of Elche», Recalls the historian and archivist of the Misteri d’Elx, Joan Castaño, when consulted about it by this newspaper.

One of the iconic views of Elche like the ones that made the monarch fall in love with on his visit in 1871. | INFORMATION

From villa to city

Faced with that imposing image, Amadeo de Saboya wondered how it could be that Elche was only considered a town and did not have the title of city, something that he promised to correct immediately. Among the retinue that accompanied the king was the mayor of the time, a Pascual Llopis and Soler who was able to pick up the glove thrown by the monarch and He wasted no time in sending a letter to Madrid to make Amadeo de Saboya’s proposal official and not remain a mere anecdote. The decree issued back from the capital of Spain approving the title of city for Elche did not take long to arrive, we only had to wait for May 13.

Also Read  The challenge of asking ourselves good questions about education

The elements that currently pay homage to the figure of Amadeo de Saboya are different. One of the most prominent is the portrait that is installed in the plenary hall of the City Council and that illustrates this article in an image that was taken this Monday. “A tombstone in his honor was also placed in the plenary hall itself, but during the time of the First Republic it was destroyed. The historian Pedro Ibarra he kept a fragment of that tombstone in his own collection, ”says Castaño.

In a handwritten newscast that is in the municipal archive you can read a chronicle of the royal presence that changed the history of Elche with fragments like this: «During his visit to Alicante he approached Elche while awaiting the arrival of his wife , María Victoria, who was traveling by boat. A ringing of bells, white palms, a music band and school children received the monarch in Elche, who visited the Virgin in the basilica’s dressing room and then climbed to the top of the bell tower ».

New garden of the Virgin

In the chronicle of the time it can also be read that the royal visit, after stopping at the basilica, continued in the New Garden of the Virgin, in which a stage had been installed, a snack was offered and market gardeners made an exhibition of climbs a palm tree to be seen live by the eyes of Amadeo de Saboya. Apart from granting the title of city, the monarch wanted to contribute to the prosperity of Elche and for that reason He made different donations that went to, among other institutions, the hospital, the convent of the Poor Clares or the Church itself.

Also Read  Neither homophobic nor the opposite: UEFA | sports

The manuscript also describes the ornaments and hangings in the streets through which the king’s entourage was expected to pass or the palm arch that was installed at the entrance to Alicante by Puente Ortices. The chronicles also highlight the role played by Mayor Llopis y Soler so that the promise made by Amadeo de Saboya after contemplating the Palm Grove became a reality and the old town of Elche became a city.