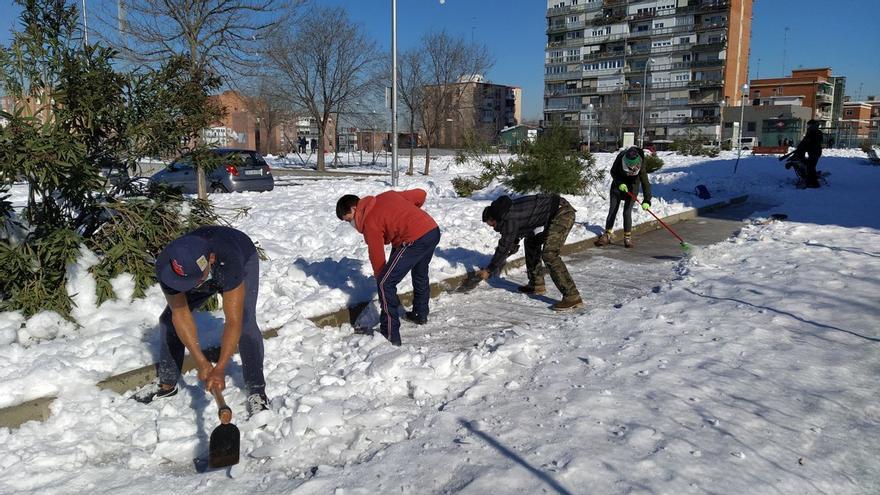 “The first days were fun with the snow, but on the third we saw that it was a real problem for mobility. We were trapped and no one was coming. So we started to organize “. Lucía Fernández Manso, 20, a neighbor of the Campamento neighborhood, on the outskirts of Madrid, check on your mobile the exact dates of the great moments of the storm Filomena. “It was very special when we finished opening the way to the health center. One group started chopping from there and another from the Colonia Jardín subway; we completed a distance of 800 meters or more. It took at least three days. When we got together it was very Exciting. We applauded. The neighbors even brought out chocolates. ”

Inés Pérez Santaella, 51 years old, another resident of the same district, was also in that moment that she relives as one of the most moving. “The health center was completely isolated. Like the market. We managed to open the paths with shovels that the gardeners lent us, “he explains.

Philomena showed up January 7, just a year ago. In a few days he turned half of Spain white in a historic snowfall. Madrid collapsed for several days, with areas that accumulated layers of up to 50 centimeters of snow. There were completely isolated neighborhoods, mainly those located on the outskirts of the capital.

“Is something going to be done?”

“Is something going to be done to remove the snow from the neighborhood?” It was Andrés Piñeiro, 54, president of the Campamento association, who launched the message on Sunday, January 10, to the WhatsApp group ‘Cuidadores del barrio’, which had worked during the pandemic.

The neighbors managed with whatever tools they could get. PRR

Like the fluttering of the butterfly, the neighbors organized themselves, looking for tools to remove ice, offering their arms to chop, carrying what was necessary, responding to the emergency room, cleaning streets that freeze again at night, figuring out how to get hold of jeeps to get to the salt that never came and even identifying people alone to bring them food or medicine.

They organized, for example, to serve people alone to bring them food or medicine

The group had about 50 people, from 18 to 60 years old, who worked morning and afternoon shifts. “That was the best, the neighborhood movement that emerged to helpAbove all, the elderly and merchants, “says Andrés.” The town hall was not expected, neither workers nor machinery appeared until several days later. I suppose they would go to other neighborhoods, “he laments.

“The most beautiful thing was seeing the young people and also that people of other nationalities joined the association for the first time, because in this neighborhood there are people from many places. Filomena joined us and encouraged us to continue doing things in the neighborhood.” This time they are the words of Antonio Arribas Andes, 65, partner of Inés and a resident of the district for more than half a century. He smiles as he recounts it, although he stiffens his gesture to point: “The personal stories that were lived came to nothing, just like the neighborhood effort. It seems that it had not happened “.

Stories like that of the market fruit stand who fell in the first days and broke his leg and since then “has had a terrible time”; or the families who lived on the street where the pipes were frozen for days; or that dog that appeared in the snow and they managed to find its owner.

“The best thing is to know that you help your neighborhood. I saw a group of people in the market, shoveling snow and I joined. Since then, I think it was ten days without stopping, hard work, physical, but it was worth it because it’s for your neighborhood. It was gratifying when the older ones could already go out, and they would go shopping on the way that you had cleared “, says José Carlos del Río Zabaleta, 33, one of those young people who joined spontaneously and has remained in the Campamento movement ever since. “There were young children who came with their parents. It was great to share the effort with them, the importance of helping each other. Since then, we continue to do things in the neighborhood, we have made a garden and a green area “, details.

Also Read  Carolina Sandoval: "It is very serious to have a voice that reaches national levels and say that COVID is like the flu"

The cold wave after

After Filomena disappeared, the rainfall stopped and although the sky cleared, a cold wave started from Sunday, January 10, which lasted until Sunday, 17, with historical records of low figures. “At first it was easy to shovel snow, but when it froze, it was very difficult, as well as dangerous, because it was slippery. The work was very physical and we are not prepared, but the younger people were there “, remembers Andrés.

The management of the city council was harshly criticized. These five neighbors, in particular, coincide in denouncing a lack of total support. “Days passed and no help arrived. The same streets had to be cleaned again because they were freezing. We didn’t have salt, they didn’t give us salt. We manage everything alone … “. Inés and Antonio are interrupted to narrate how, despite proposing various formulas to achieve it, there was no way. Although there were points to go to pick it up, they could not drive to them; the streets were still impassable. “The salt was essential, every night everything that we had cleaned the day before was frozen, but in the end it was our daughter who, with some friends, brought sacks.”

Antonio Arribas in one of the shifts to remove snow from the access to the houses. PRR

They don’t remember when the streets were cleaned up at all. “I think some areas when the good weather came, then everything melted “, assures Antonio, but Inés appealed to him and asked: “When did we demonstrate in La Latina? Then we could move there, so a few days had passed. Well, that same day in the afternoon, the machines arrived.”

Also Read  A network that sent 16,000 tons of contaminated plastics to Asia falls

“It is clear that there are clear differences with other areas, you just have to see the sidewalks”

The structural “and neglect” problems of the neighborhood further complicated management. “It is clear that there are clear differences with respect to other areas, you just have to see the sidewalks, for example,” explains the youngest, Lucia. “The Campamento triangle, cut by the N-5 and that divides the neighborhood in two, with a walkway included, is very dangerous. The sidewalks are in poor condition, and they couldn’t be seen with the snow. These are things that should be resolved now , We have been claiming that this triangle of noise and pollution that Campamento has with the Paseo de Extremadura, the Boadilla Highway and the Carabanchel-Aravaca highway is shameful (about 200,000 vehicles daily, 130,000, 45,000 and 30,000 respectively) “.

Despite the plans and budgetary allocations, the solutions do not arrive. “It was confirmed with Filomena. And it was very hard to see that the citizens of this neighborhood, once again, were completely alone,” says Antonio. “As sad as it is, in this neighborhood we only trust the neighborhood association “, Inés concludes.