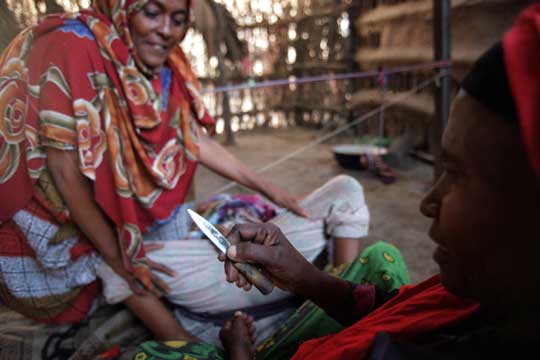 Note to readers: EL PAÍS openly offers the Future Planet section for its daily and global information contribution on the 2030 Agenda, the eradication of poverty and inequality, and the progress of developing countries. If you want to support our journalism, subscribe here.

Rizman used to view female genital mutilation as a procedure that just “had to be done.” His sister had her clitoris cut as a child and, although he did not see it, he remembers that his parents talked about it and took her to a clinic to carry out the procedure. When his daughter was born, his parents and in-laws asked him and his wife when they would send the little girl to undergo the procedure. Female Circumcision –A Malay term for female genital cutting, sometimes called female circumcision. “We thought it was something that was required as part of religion, and when she was two or three months old, we did it,” explains Rizman, 34, a communications professional who prefers not to use her real name.

Many Muslim Singaporeans believe that the procedure is a religious necessity. In Islam men must be circumcised and there is still a widespread belief in the Muslim community in some countries that girls should undergo a similar procedure also when they are young.

Rizman’s daughter was three months old when she underwent this practice at a clinic in 2014. The girl was lying in bed and the doctor, a Muslim woman, said it would be done very quickly and that “only a small part would be removed ”From the clitoris. She remembers that everything was done hygienically and that she looked very professional. The woman said a few prayers before going on duty, which helped lead him to believe it was a religious requirement.

Over time, Rizman became curious and wanted to know more about the Female Circumcision and why it is done. He is not a particularly religious person, but he knows that Islam “has a very valid reason for all things marked as dos and don’ts,” he says.

As the woman read and investigated more deeply on this topic, she became increasingly uncomfortable because she could not find definitive answers. Some people commented that cutting is a mandatory part of Islamic law, even though it does not appear as such in the Qur’an. Others were of the opinion that it is not strictly necessary and that it is a cultural rather than a religious practice.

Rizman came to believe that the cut was not a strict requirement and had subjected his daughter to a procedure that was unnecessary and perhaps, in his words, cruel. “I read somewhere that the part that my daughter took off was to numb her clitoris. So she doesn’t get promiscuous as she grows up and has a great sex drive, ”she says. That was disturbing for him, because his daughter’s sexual destiny was sealed and she was considered potentially promiscuous when she was just a baby.

I read somewhere that the part my daughter took off was to numb her clit. So she doesn’t get promiscuous as she grows up and has a strong sex drive, ”says Rizman years after having her daughter ablated.

Both include the injury or partial or total removal of the external female genital organs for non-medical reasons, and the The United Nations considers them a violation of the rights of girls and women. It is illegal in many parts of the world and can cause long-term problems with sex, childbirth and even the mental health of the affected person.

There are four different types of female genital cutting. Types I and IV are the most common in Southeast Asia. Type I is the partial or total removal of the clitoris or the upper part of the clitoris, and Type IV is the pricking, piercing, or scraping of the genitals.

It is not clear when this procedure began in Singapore. Some researchers have theorized that the practice reached Southeast Asia as part of the Islamic tradition linked to the Shafi’i school of Islam, but its spread is still not fully understood.

Muslim women, who make up about 7% of the population (420,000 people), are most at risk. It is estimated that around 60% of Malaysian women in the country have already been cut, according to an unpublished survey conducted by UNICEF in 2016. These data are mentioned in research by activist Saza Radilla: a thesis on the complexities of female genital cutting performed in Yale-Nus College Singapore between 2017 and 2018.

A taboo that kills

The communities continue to cut their daughters because it is something hidden and a very difficult taboo subject to address. As Miranda Dobson, senior director of communication for the Orchid Project, a British charity working to end female genital cutting, some people assume that this practice only takes place ‘there’, somewhere far away, ‘only in rural settings’,’ only in African countries’, or ‘only ”In places with poverty and low levels of education, but not in a city-state as modern as Singapore.

However, ablation is a global problem that affects girls, women and their communities in Africa, Asia, the Middle East and within the global diaspora. The procedure has affected women of different educational levels, of different ethnicity, class and geography, he says.

Many supporters of genital cutting in Singapore regard the procedure as a “small cut” that does no harm to the girl. But Dobson notes that while some people experience extreme health consequences, there are always some risks. For example, “it can often cause physical and psychological impacts, such as severe blood loss, scarring, infection, post-traumatic stress disorder and depression,” she remarks.

There is no law prohibiting the procedure in Singapore. Activists and organizations that actively discuss this issue are met by the silence of the Government

There is no law prohibiting the procedure in Singapore. Activists and organizations actively discussing this issue are met with the government’s silence, according to Dobson. Earlier in 2013, the Singapore Islamic Religious Council, the Majlis Ugama Islam Singapura (MUIS), issued a statement saying that both the male and female cut were mandatory, although any mention of the practice has been removed from your website.

“They cut you too”

Activist Saza, 25, a Singaporean who speaks openly about her history, discovered only four years ago that she had been cut up as a child. On her cousin’s second birthday, one of her relatives approached her and told her that the little girl had had it done the week before.

When she showed her outrage, a relative of hers added circumcised (They cut you too). “My jaw dropped. I’ve never been informed about this before, and I didn’t know it had been done to me, “he says. He asked his family members, who insisted that it was mandatory and that they had done it for their own good. I did not know that little girls were subjected to the procedure with the consent of their parents. Her lack of understanding, followed by her outrage, led her to spend much of her time at the university developing the thesis and campaigning against the procedure.

A colleague in her awareness campaign, Sya Taha, founded the group Crit Talk, which organizes workshops to encourage Muslims to speak freely about the practice. These provide critical perspectives and more information to current and future parents to help them make an informed decision. “I can happily say that so far all of our participants declared at the end of our workshop that they would not do it with their daughters,” says Sya, adding that there is a website with information and forums with anonymous discussions on this topic.

Although Rizman has managed to convince his sister not to cut her niece, he has yet to be able to openly discuss the practice with other members of the Muslim community. Because “any kind of discussion about this can result in my family being ostracized, singled out and seen as an example of a ‘bad influence’ in the community,” he says.

Rizman hasn’t had a second daughter, but he knows for sure that if he did, he wouldn’t cut her off. But he doesn’t think the procedure should be banned. One of the reasons for the practice is religious, so he believes it is a personal choice of the parents. However, he expects a firm and public stance from MUIS on this. “They should say if the cut should be made or not, at this moment there are two positions. I hope the latter, because I don’t think that daughters should do this when they are newborn ”, he says.

Religious authorities justify that if the procedure cannot be easily done in Singapore, families will continue to perform it clandestinely on their daughters, in places where conditions could be much less hygienic and the cut may be more extreme.

Saza thinks differently. She considers that if the competent authorities can refute the reasons for justifying female genital mutilation, this practice “will be considered unnecessary and will no longer be practiced.”