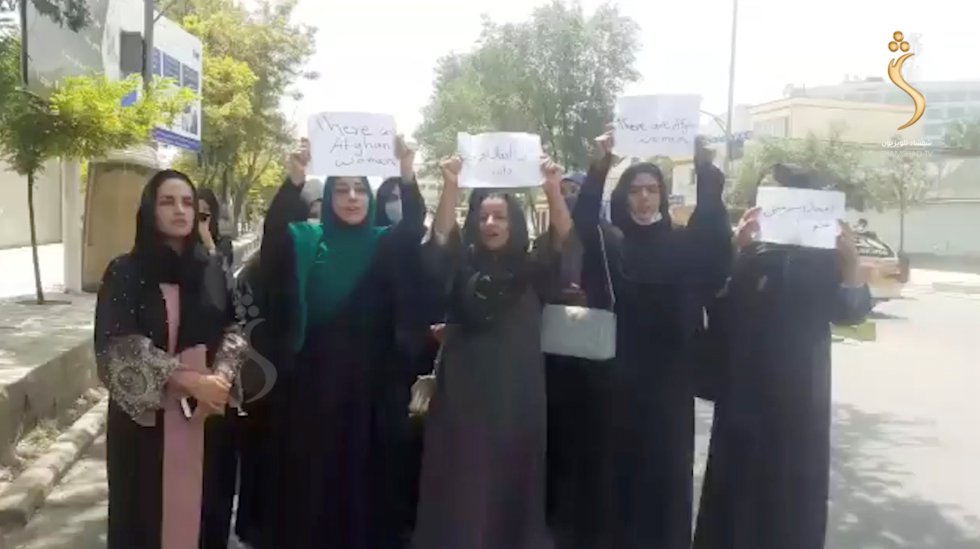 They are Afghan government officials, activists, workers from other sectors of the economy. Little else is known about the Afghans who have called on the Taliban to include their country’s women in their future government, after holding a meeting in a place in Afghanistan that has not been specified either. What is known are the names and surnames of some of them, quoted this Friday by the independent television network Tolo news on its website. A demonstration of great value, since there are diverse voices that have denounced that the Taliban “have begun to go house to house looking for women activists.”

Fariha Esar, human rights activist; Rahima Radmanesh, a women’s rights fighter, and Shukria Mashaal, a feminist, are some of the women who participated in the meeting reported by the independent Afghan media. At that meeting, these women not only urged the fundamentalist militia not to leave Afghans on the sidelines of decision-making, but also proclaimed that they will not renounce their rights, always precarious and with great limitations – between 2010 and 2010. By 2020, 3,219 women were murdered in Afghanistan, according to the UN – which they have acquired in the last 20 years, since the fall of the previous Taliban regime in 2001.

“The people, the government and any official who will form a state in the future cannot ignore the women of Afghanistan. We are not going to renounce our right to education, work and political and social participation “, declared the activist Fariha Esar, promoter among other causes of a campaign to end sexist stereotypes about the rule called” Menstruation is not a taboo ”.

“Afghan women have fought for those values ​​and achieved those rights,” confirms Rahima Radmanesh, another activist for women’s rights, seconded by another of her colleagues, Shukria Mashaal, who adds: “We have worked hard for 20 years and not we are going to go back ”.

Another Afghan woman, who is only identified as a “human rights activist”, concludes, according to the information from Tolo news: “We do not want an imposed government. It must be based on the will of the Afghan citizens. “

In a hitherto unprecedented press conference on August 17, Taliban spokesman Zabihullah Mujahid tried to reassure both Afghans and the international community about his intentions and assured that his regime will respect women’s rights. within the framework of Islam. However, Mujahid did not specify the limits set by the sharia, according to his rigorous and retrograde interpretation of Islamic law.

Allusions to Islamic law are probably not what Afghans are most concerned about. All Muslim countries have the sharia as a source of law to a greater or lesser extent. The memory of the dark days that the Taliban imposed on them in the five years in which they assumed power, between 1996 and 2001, probably weighs more heavily on their minds. The Taliban then cloistered Afghans in their homes, forbidding them to work, study and even make noise when walking, under penalty of cruel punishments that could lead to death by stoning and other heinous ends.

The activists cited by Tolo news are not the only Afghans who are displaying great courage. The information about the women’s meeting is signed by a journalist, Zahra Rahimi. A reporter for that network, Rahimi interviewed several Taliban in the street days after the fall of Kabul last Sunday. A Tolo news anchor, Beheshta Arghand, questioned a Taliban spokesperson, Mawlawi Abdulhaq Hemad, live on Tuesday. One of his questions was precisely whether the Taliban were searching for Afghans house to house.