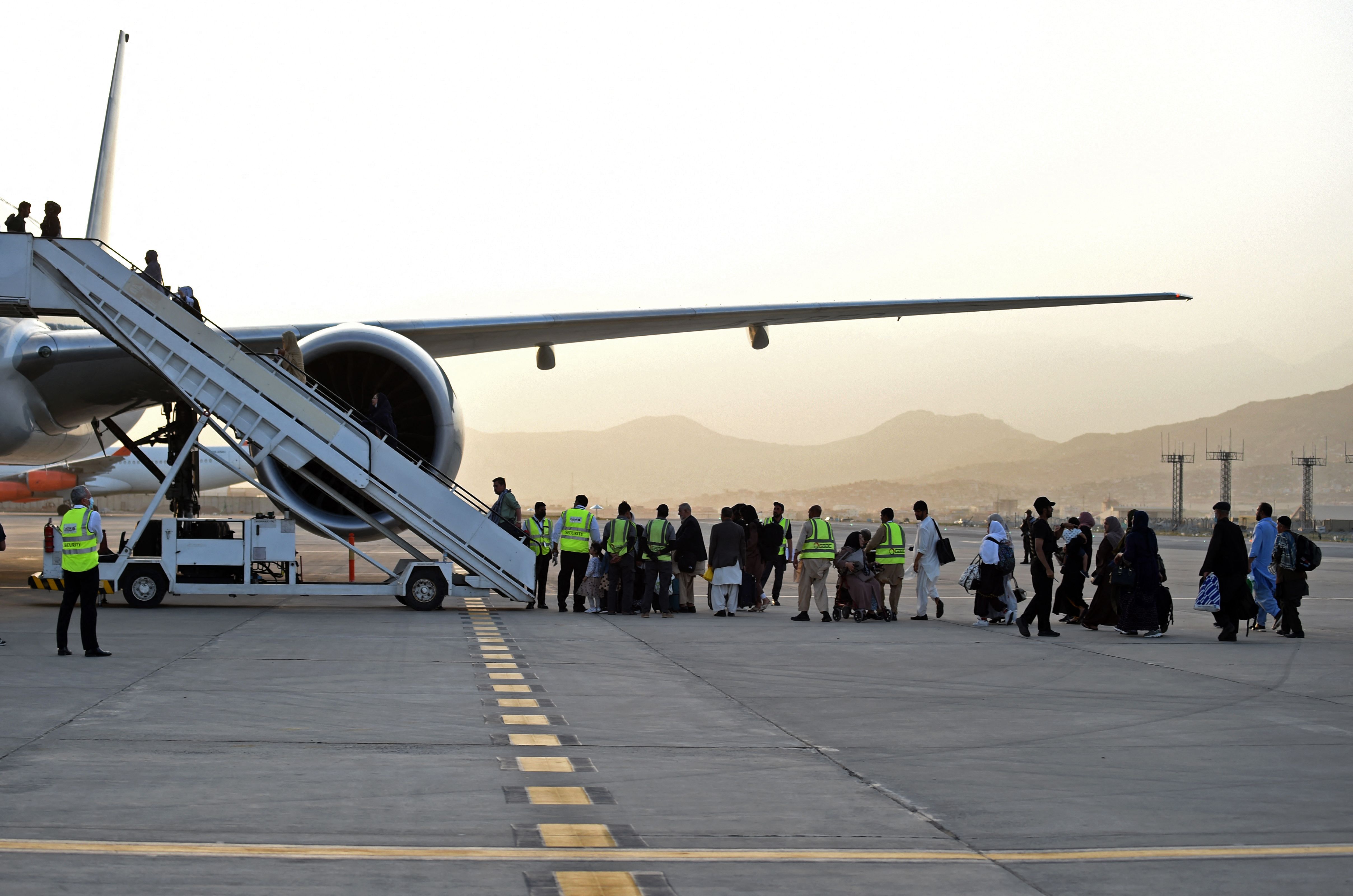 The Taliban are beginning to demand an international response to their gestures. Although they have not linked it directly, at the same time that this Thursday they authorized the first departure of foreigners by air since they recovered the Kabul airport on August 31, they have also demanded that the sanctions of the United States and the UN that weigh on several of the members of the new regime. The presence of some of the sanctioned Taliban in the provisional government announced last Tuesday constitutes an obstacle to an eventual recognition of the new regime by the international community, particularly Western countries.

Qatar Airways has hung the medal for making the first international flight at Kabul airport under the control of the Taliban. The device, a Boeing 777, arrived in the morning at the airport in the Afghan capital with a shipment of humanitarian aid and left the airfield in the middle of the afternoon “with passengers, including a large number of foreigners,” all the Afghan media have reported. Earlier, Qatari officials had said that the Taliban government would allow between 100 and 150 Westerners, including US citizens, to leave by air. Reuters, quoting an American source, spoke of “200 foreigners.”

The B-777 has a capacity for between 300 and 360 passengers, depending on the original configuration. Although Qatari spokesmen have insisted that it was not an evacuation flight, it was not a strictly commercial flight either, as it was chartered by the Government. Qatar has participated, together with Turkey, in the repair and operation of the airfield that was rendered useless after the departure of US troops on August 30. The Taliban, eager to regain air connectivity, have withdrawn the name Hamid Karzai International Airport and reverted to the old Kabul International Airport.

The fundamentalists hope that their gestures will obtain international recognition and seem disappointed by the cold reception that their government has had. Its spokesmen have repeated that they want to have good relations with all countries, including Western ones. From these, however, caution is maintained and it is considered unpromising that the new Cabinet is only made up of the Taliban and mostly Pashtuns, the ethnic group from which the Taliban emerged and to which between 40% and 50% belong. of the 39 million Afghans.

They are also ugly at the exclusion of women, even at the level of vice-ministers, despite the fact that Afghan women have been demonstrating almost daily for days to ensure that their rights are respected and that they be given a voice and recognition in the new regime. The only thing they have achieved, in addition to the increasing repression of their protests, is the elimination of the Ministry of Women. The Taliban have, however, reinstated the reviled Ministry for the Prevention of Vice and the Promotion of Virtue, which during its previous dictatorship ensured that Afghans did not leave home without burka or men will grow beards.

Despite the efforts of some of its leaders to project a more moderate image, fundamentalists are in the duster. A Taliban spokesman stated this Thursday during an intervention on ToloTV that “a woman cannot be a minister because it would be like hanging something around her neck that she cannot bear.” In her opinion, women “should bring children into the world and those who protest do not represent all Afghans.” The day before, the head of the Cultural Commission, Ahmadullah Wasiq, told Australian television that Afghans will not be allowed to play cricket or any other sport because “it is not necessary” and their bodies would be exposed. The Australian cricket federation is threatening to suspend a match against Afghanistan’s men’s team if the ban is upheld.

Taliban spokesmen have condemned criticism of some of their ministers and demanded that they be removed from the US and UN blacklists. Half of the 33 members of the Cabinet are sanctioned by the United Nations. The US, for its part, also offers rewards for Sirajuddin and Khalil-ul-Rahman Haqqani. “The US position on this is a violation of the Doha accords,” Mohammad Naim, the spokesman for the Qatari Taliban Political Office, tweeted.

The statement they have released focuses on denying that the Haqqani constitute an independent group from the Taliban. “The family of the honorable martyr Haqqani is part of the Islamic Emirate and they do not have a separate name or organization,” states the text in reference to Jalaluddin Haqqani, founder of the so-called Haqqani Network and father of its current leader and new Interior Minister. That group is blamed for some of the most serious attacks on Afghan civilians. According to the fundamentalists, in the Doha agreements, the United States promised to withdraw sanctions from all, without exception.

Western concern is not limited to the low representativeness of the Government. After having declared that they were going to judge the Taliban for their actions and not for their words, they are verifying that one and the other do not add up. Despite their commitment to respect press freedom, several Afghan journalists, cameramen or assistants to foreign correspondents, have been detained and brutally beaten in the last two days.

The growing nervousness of Islamist leaders at the almost daily protests by women in Kabul and some other cities reached a climax on Tuesday. In the largest gathering so far, several hundred men and women voiced their support for the resistance and denounced Pakistan’s interference in their country. Sirajuddin Haqqani debuted as minister outlawing all unauthorized demonstrations, which has not prevented them from repeating this Thursday. And that once again they have been dissolved by blows and shots into the air. At least a dozen people have been arrested in Mazar-i-Sharif, northern Afghanistan, during a protest denouncing the repression throughout the country.