Thousands of Afghans crowd the gates of the Kabul international airfield, which after the takeover by the Taliban last Sunday has become the only way out of the capital of Afghanistan. The scenes of tension, chaos and despair within the enclosure and its perimeter have left several dead in recent days. The sound of gunshots is constant. Access to the airfield – whose interior is under the command of US forces – is controlled by the fundamentalist militia, which does not hesitate to use force to prevent the entry of Afghans seeking evacuation. “The Taliban control the main route of entry to the airfield and, although they have said that they are not going to do anything to anyone, they are not letting Afghans pass, they only allow access to those who have foreign passports,” say sources close to the Spanish evacuation device in Kabul.

“At this time the most difficult thing is to get to the base, the safe area near the airport,” say the same sources close to the team consisting mainly of 17 agents from the GEO (Special Operations Group) and the UIP (Police Intervention Units ) posted in the Afghan capital as security personnel of the Spanish embassy.

“The entrance to the passenger terminal is blocked because the area of ​​the civil sector does not work,” these sources warn. “It can only be accessed through the access gates to the airport’s military base and in each of them there are thousands of people.” Chaos is the constant in the Afghan capital, they describe.

“The members of the Spanish legation will not leave until they have removed all the collaborators from the country,” they point out. “The watchword is not to leave anyone behind,” they insist. However, the task of locating, summoning and transferring the hundreds of people who have worked both with the Spanish Armed Forces deployed in Afghanistan, as well as in the embassy or in European Union projects is titanic for those few Spanish police officers. who have been working non-stop for days, while military planes to transport refugees and their families trickle down to Kabul airport. 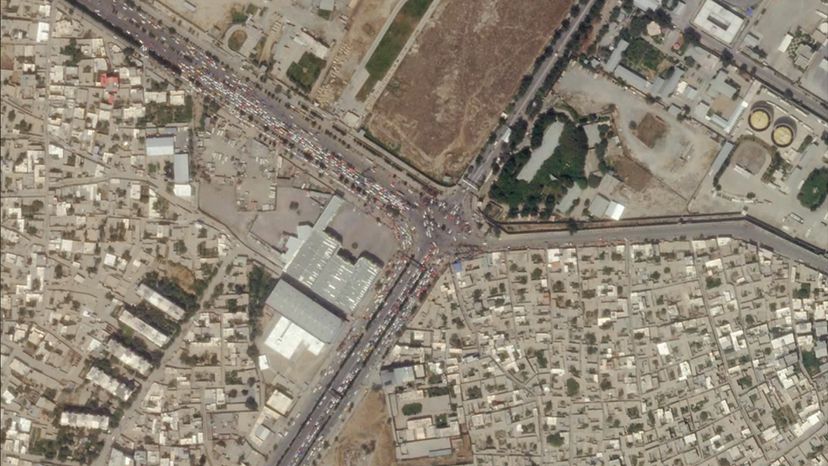 TRAFFIC BLOCKS ACCESS TO THE AIRPORT: Satellite images, taken from August 16 to 18, show how the density of traffic is increasing. The white dots are the vehicles that accumulate around the roundabout that gives access to the main entrance of the airport. (PLANET LABS INC / REUTERS)

“The Taliban not only control the access roads to the airfield, but also patrol the streets, there are random controls, and people are afraid of being intercepted with their families and they do not always see it safe to go to the meeting points,” they explain. sources, who also point out that “telephone communications are very bad and fail.” Among the collaborators who want to be evacuated there are personnel of all kinds: “Drivers, secretaries, translators, local personnel, people who worked in European projects for the development of agriculture, the promotion of women, hygiene and health …”. The many EU employees have been divided by country with the corresponding lists of names and contacts.

It is estimated that the people who would have to be evacuated by Spain could be about 500 or 600. At the moment, only 53 have arrived at the airport of the Torrejón military base (Madrid) at dawn this Thursday. Two more flights are expected to land at Kabul airport in the next few hours to return with new asylum seekers making a stopover in Dubai this Friday and Saturday afternoon, security conditions permitting. 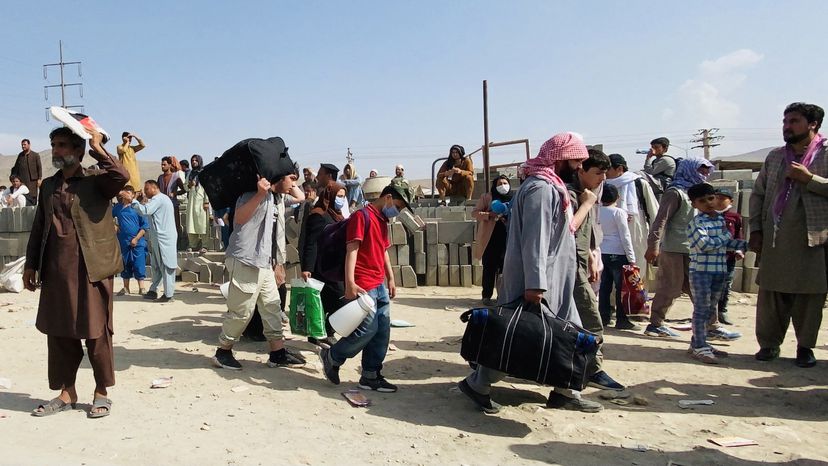 “HAVE YOU BEEN SHOT WITH A BULLET?”: The sequence shows a wounded man near the airport. The Taliban control access and there are beginning to be testimonies that denounce that they are using live fire to disperse them. (STRINGER / REUTERS)

On the outskirts of the airport, Hasán (fictitious name), an interpreter who worked with the Spanish Army and who is trying to leave the country with his daughters, was on Thursday. He and six other translators were struggling to get closer to the entrance. A queue “of almost two kilometers” prevented it.

”The Kabul track has many entrances. East West North South. And every day they direct us to a door and when we get there, it is full of commotion, of many people ”, Hasán narrated this Thursday through a WhatsApp voice note. As they tried to approach the airport by bus, translators from Badghis province, in the west of the country, asked the Spanish authorities to send someone for them. “The British, the Americans and the Turks, when their interpreters arrive, they go out for them and allow them to enter and the Spanish have no one.” 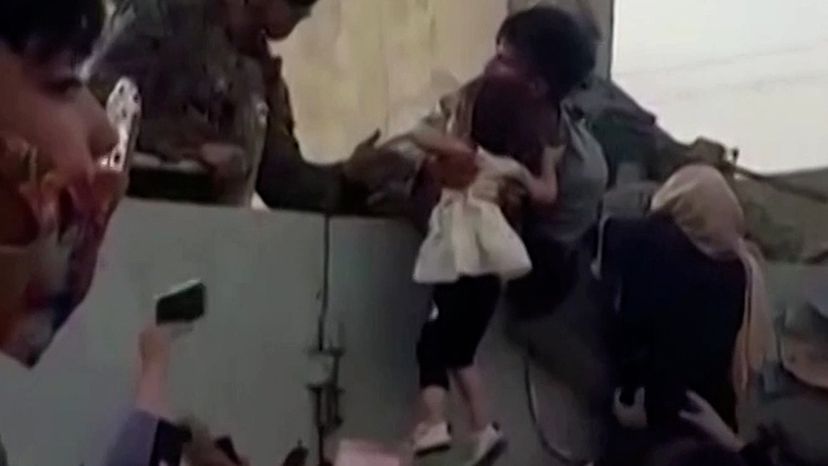 US SOLDIERS HELP A GIRL JUMP THE AIRPORT WALL: A minor tries to climb the airport wall. The military helps him. He is not the only person who has managed to access the site in this way.(STRINGER / REUTERS)

Hasan and his companions experienced the same situation as on Thursday the day before. They were standing at one of the entrances to the airport since eight in the morning on Wednesday, local time (5.30 in the peninsula). The translators who worked with the Spanish mission in Afghanistan arrived in the capital on Monday after receiving a call from the Ministry of Foreign Affairs advising them that they had to be at the door of the airfield. However, the translator says that no one came out for them that day either. “We called the same number several times so we could get in, but nobody came out for us. We were waiting until eight at night ”. Hasán and his colleagues asked the Spanish authorities to inform them of another method to approach the collapsed airport entrances.

Jahid (not his real name) has not dared to leave the apartment where he is. She fears for her life, that of her two sons and three daughters. The Afghan translator worked from 2010 to 2013 with the Spanish Army. “They told us by email that they would call all the interpreters. We are still waiting ”, he told this Thursday by message. The collaborator left Gazhni when it fell to the Taliban a week ago and headed for the capital. Now he is waiting to be called by some Spanish authority. Jahid narrates that his situation is worrying. “The Taliban take advantage of their time to visit some houses and two nights ago they came to where we were staying. The owner came out, who is a man with a white beard, and I hid out of fear ”. After that episode, he says he changed accommodation.