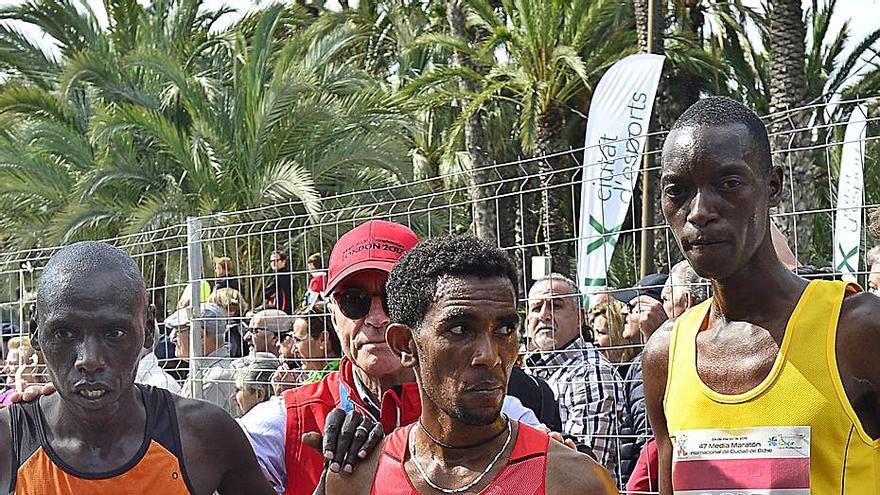 The organization has closed the registrations with 2,323 participants, in what will be the most massive post-pandemic popular race in the province of Alicante.

Along with the Moroccan legion, the athlete from Burundi Diedonne Nsengiyua has also confirmed his attendance in Elche, who has run the 10 kilometers in 29 minutes and five seconds.

All of them are already in Spain and before being able to run in Elche they have had to pass the anti-covid tests, their names to the Higher Sports Council (CSD) and, in turn, obtain authorization from the Royal Spanish Federation Athletics (RFEF) and the consulates of their respective countries.

Another of the aspiring to fight for victory will be the runner of Moroccan origin settling in Cáceres and defending the colors of the La Nucía Athletics Club, Housamme Benabbou, who has been twice champion of Spain in the Half Marathon and recently runner-up, who accredits a best mark of one hour, two minutes and one second.

They will also be close to the leading group, but two classics of long-distance races in the province of Alicante, such as Miguel Ángel Barzola, from the Alicante Athletics Club, or the runner from Villena Andrés Mico, have a difficult time fighting for victory.

In the female category, the 48th edition of the Elche Half Marathon will feature two elite athletes from Ethiopia: Tiruye Mesfin Aman, with a personal record of one hour and ten minutes; and Tigst Getnet Belew, who is the current Ethiopian cross-country runner-up.

The Ecuadorian Silvia Patricia Ortiz, Yésica Más, from the Alicante Athletics Club, who has been sixth in the Spanish Half Marathon Championship, will try to make things difficult for them; and the fireproof Moroccan based in Cartagena Wafiya Benali.

The African athletes will try to break the records of the new circuit of the event, which in the last edition of 2019 they left in the men’s category, Gebrie Erkihun Jemberie, in one hour two minutes and 37 seconds; and in the female, the Ethiopian Urge Dechasa Eresa, in one hour, 14 minutes and 59 seconds.

The organization awards 500 euros to the winners, both men and women, and will award an additional 500 euros to whoever is able to improve the record of the Elche test.

In order for these elite runners to be in Elche, as in other important long-distance races, the organizers have had to defray the travel expenses and pay a fixed amount of money.

The Decathlon Athletics Club and the Department of Sports hoped to reach 3,000 participants, but in recent days the registrations have not gone as expected and they have finally stayed at 2323, which is no longer an important figure.

A single outlet and masks before and after running

Finally, with the restrictions lowered, there will be only one exit instead of two. In addition, to try to maintain the greatest distance between runners, instead of doing it by boxes (box) depending on the brands, a separation between groups of one hundred will be marked. Athletes will be required to wear the mask until they do not pass the starting arc and put it back on when they reach the finish line. The collection of numbers will be made by appointment between tomorrow Friday afternoon, Saturday throughout the day and Sunday until one hour before departure.