ANAHEIM, Calif. — Stars forward Denis Gurianov was a healthy scratch Thursday night in Anaheim, marking the second time this season the former first-round pick was pulled from the lineup.

Gurianov was also scratched in November at Winnipeg. This season, Gurianov has 11 goals and 18 assists in 61 games.

“He’s an offensive player and there’s been absolutely nothing happening offensively for four or five games,” Stars coach Rick Bowness said before the game. “Simple as that. I don’t expect every player to be the most reliable defensive player. That’s not in everyone’s makeup.

“But if you’re not going to be reliable defensively, you have to be able to put some offense on the board and that’s just not happening right now. We’ve done it before, let him sit out and watch a game. It got him going last time, we’re hoping it gets him going again today, because we need him.”

Marian Studenic entered the lineup in place of Gurianov on a line with Tyler Seguin and Vladislav Namestnikov.

Those weren’t that long ago, so how did Bowness look at those recent games?

In the last three games, the Stars have been outshot 26-14 at 5 on 5 when Gurianov is on the ice. But even that can be a touch (not wholly) misleading. In Carolina, the Stars were drastically outshot with any player on the ice. Against Vancouver, the Stars outshot the Canucks 5-4 with Gurianov on the ice.

On Tuesday, during a 3-2 win over the Ducks, Dallas was outshot 13-4 with Gurianov on the ice at 5 on 5. It was tied with newly acquired Vladislav Namestnikov for the worst mark on the Stars two nights prior.

“We show [Gurianov] the video, this is what’s missing in your game,” Bowness said. “This is what you have to get back on track here. If we were in a better position in terms of a playoff spot, you’d be a little more patient, but we don’t have that luxury right now. Every game, we need every one at the top of their game.

“We’re not going to scratch a guy on one bad game. That’s not going to happen. You might get a game-winner, but if there’s another 10 shifts that aren’t where they should be, you can’t be fooled by that either. We walk a fine line with that. We understand his importance. You’ve got to be able to generate offense if you’re not going to be the best defensive player on the ice. That just hasn’t happened the last few games.”

Gurianov was the team’s leading goal-scorer just two years ago. He is fourth among regular Stars forwards with 1.74 points per 60 minutes at 5 on 5. On a team that struggles to score goals, Gurianov can provide them.

The Stars coaching staff has asked Gurianov to use his speed more in transition, to skate wide and generate scoring chances. It’s something that has tended to come and go with Gurianov’s confidence.

When Gurianov is confident, he hangs on to the puck and drives wide. When he isn’t, he pulls up. Now, the Stars will have to repair his confidence after another healthy scratch during a playoff race.

“Just keep encouraging him to do what he does well, and that’s to skate with the puck,” Bowness said. “Get it and go. Then you’re noticing him. If you’re not seeing him skate with the puck down the wing and doing the good things that he’s capable of, then that’s what we’re trying to fix. Get that on a consistent basis, not sporadic.

It is true that the Stars give up more chances when Gurianov is on the ice. The only Stars player with consistently worse defensive numbers at 5 on 5 is Jamie Benn, and the two have spent a lot of time together on the ice this season.

But expecting Gurianov to become something he’s not (a reliable defensive player) is ignoring the offensive potential he has.

“You can live with some of the deficiencies, you have to,” Bowness said. “That’s fine. But, again, if you’re off defensively, you have to generate some offense. There has to be some pluses there.”

Lindell dinged: Stars defenseman Esa Lindell missed Thursday’s game with an upper-body injury, his first missed game since March 6, 2018. Lindell played in the previous 287 games for the Stars, including every game in the past three season.

Lindell did not practice Wednesday afternoon and was not on the ice for optional morning skate on Thursday. Andrej Sekera entered the lineup in Lindell’s place.

Bowness mentioned how the Stars would need a penalty killer in the lineup without Lindell available. Sekera kills penalties. Thomas Harley, the rookie offensive defenseman, does not.

Even without inserting Sekera, though, the Stars already had four PKers available on defense: Jani Hakanpää, Miro Heiskanen, Ryan Suter and Joel Hanley. Bowness said Heiskanen would kill penalties on Thursday, a boost in minutes after coming back Tuesday from nearly a month-long absence due to mononucleosis. 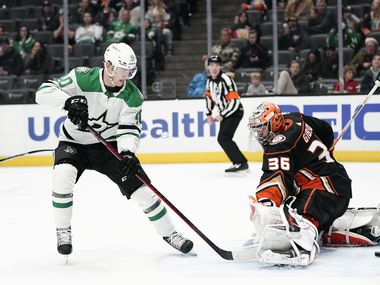