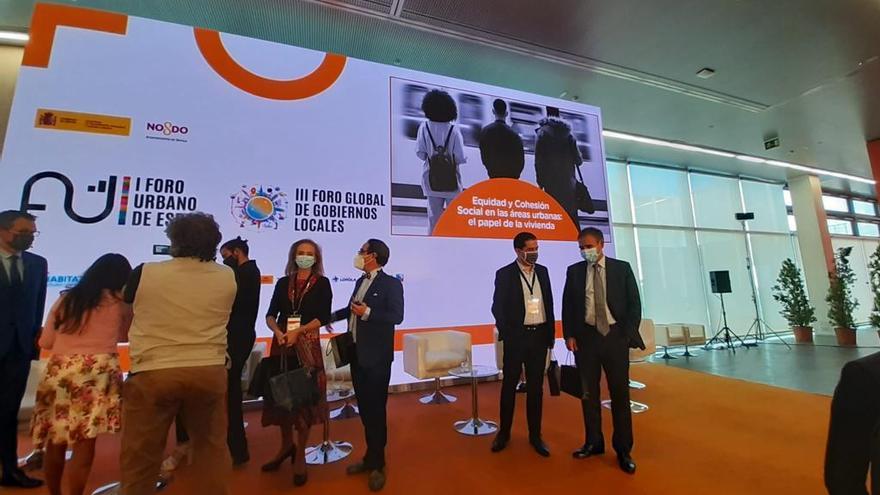 All the policies implemented are based on a fundamental premise that has marked the strategy of the city of Alcoy, “people at the center of public policies”, and with the arrival of the pandemic it has accelerated because Health is already a priority For all of us, we must have a strong public health system, citizens have to take care of themselves and from the city we must help make it possible.

In his speech, the mayor explained the measures already implemented depending on the objectives in Alcoy in three big blocks: Alcoy a city to walk, Alcoy a green city and spaces for conviviality and equipment.

Regarding the first block, Alcoy a city to walk, Francés has indicated that the city is committed to traffic calming and advance to the circulation law creating zone 30. This has reduced the number of accidents with injuries from an average of 150 per year from 2010 to 2015, to 62 in 2020, which means that with the measures implemented, almost 100 people from Alcoy and Alcoy are injured less by traffic accidents each year. It has also highlighted the commitment to Universal accessibility, drawing up the plan of universal accessibility and investing more than 1 million euros a year (specifically from this plan) to make Alcoy a city for everyone. Another important aspect is the pedestrianization and widening of sidewalks, reducing the presence of vehicles in the center of Alcoy so that this space is occupied by the citizen, which also entails the reduction of emissions, as well as the creation of healthy routes, which will now be expanded with the sensor installation and the Smart City platform. The designed routes allow you to choose between the path with shadows, less noise, less allergens, more accessible or bio-healthy.

The second block is that of Alcoy green city. Green corridors have been created that connect the city with natural spaces such as the path from Cervantes to Font del Quinzet, each year more than 2,000 trees are planted in the urban area and Francés has also especially highlighted that the City Council is working on a project of renaturation of the city to qualify for more than 2 million euros from the recovery, transformation and resilience funds of the European Union.

The third section is the one that focuses on living spaces and equipment. The mayor has indicated the large number of initiatives carried out, such as the cycle paths that connect all neighborhoods and facilitate sustainable mobility to polygons and educational centers, the commitment to proximity trade; avoiding having to go shopping by car in the suburbs, the childish games like the castle of the Romeral park, the urban gardens that favor activity, mainly of the elderly, and coexistence, the Active Aging and Unwanted Loneliness Program, the Initiation Sports School (EPI), the new sports facilities such as the BMX track, the new soccer field or the roof from Francisco Laporta’s outer court. In addition to these measures, it is necessary to point out other actions that have been carried out in health matters, such as the decision to convert Alcoy into a cardioprotected city. The city has more than 20 defibrillators in different spaces, both public and private. Not only have they been installed, they have also been trained to use them in the event of cardiorespiratory arrest. There are also biosaludable devices for the elderly in different parks of the city and a biosaludable circuit was also built in the river area, called ‘Riverfit’, where 16 different exercises can be done, depending on the direction of travel and the Vía Parque, an eco-boulevard that will connect 4 neighborhoods of the city and will pass through 6 educational centers. It will be an example of sustainable and safe mobility.

These have been some of the examples highlighted by Toni Francés, within the many actions that the municipal government is carrying out, and has also indicated that “Co-governance with other administrations such as the Central Government or the regional government is essential to be able to carry out all these initiatives. Municipalities have never been helped so much as now, it is essential to be able to guarantee success ».