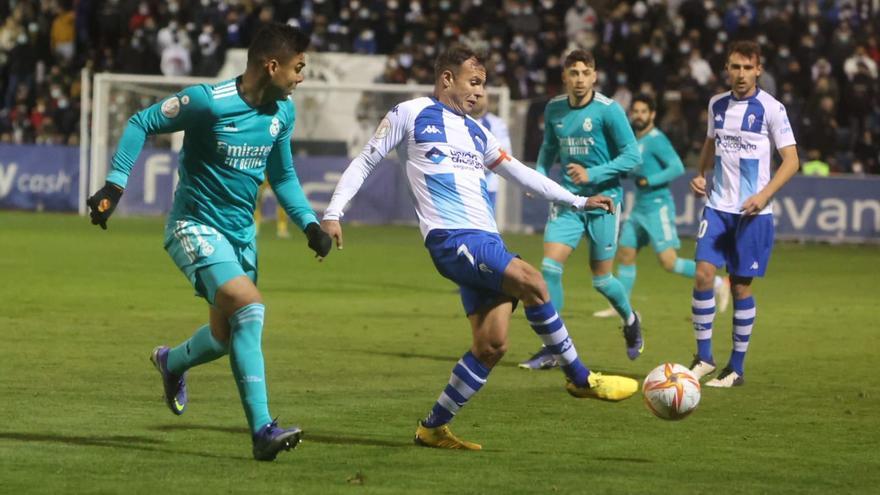 It could not be although it was very close. Two rebound goals from Madrid prevented Alcoyano from writing another golden page in their history and eliminating the Whites for the second year in a row. The Blue and Whites signed another exquisite match, fought until the end and at various times leaving their rival against the ropes, but Militao’s goal in the only dangerous occasion for Madrid in the first half and two goals touched by the fortune of Asensio and Isco ended the dream of being in the hype of the round of 16. It was a great Alcoyano game that tied with a goal from Dani Vega that left Ancelotti’s team touched for a few minutes until the rebounding goals arrived to destroy any hope.

Parras’s proposal was laudable. A fierce attack, pressure on all the lines and tight defense that puzzled the whites and did not allow them to think beyond the midfield. That level of play was not easy to maintain physically and as the minutes passed the game was diluted taking advantage of Madrid to enjoy superiority. But the Madrid team did not have it easy and he had to suffer until his quality accompanied by a dose of fortune gave him the pass at El Collao.

Alcoyano did not shrink against a Madrid that had a really bad time in the first half before the siege to which its rival was submitting. Those from Parras signed 45 brilliant minutes only clouded by Militao’s goal that took advantage of Alcoyano’s only error, leaving him free of mark in a corner in the final stretch of the first half. It was a ball of oxygen for a Madrid that found its savior in Lunin. The white goalkeeper had to get his best version to avoid a new blush at El Collao. The first warning came at three minutes with a good shot by Dani Vega that Lunin deflected shortly before Camavinga avoided a safe goal from Alcoyano.

The local team attacked with everything, pressed, fell back in tenths of a second and forced numerous losses in the center of the field. Antón and Mourad were a headache for Militao and Alaba, who had to multiply themselves to avoid a constant danger. Andy also starred in actions of merit, especially an individual play with a final shot that ended up on the side of the goal. Minutes later, the Alicante player also forced the white goalkeeper to act with a masterfully taken corner.

Alcoyano’s stealing of balls was constant as well as dominance in the game, but Madrid was more effective and scored the only chance they had in the first 45 minutes.

After the break, the match entered a different scenario. Madrid began dominating and after five minutes the first warning came with a powerful shot from Alaba that found no door. The pressure was now exerted by the Whites and Alcoyano did not find the fluidity of the first half. Parras looks for solutions with a triple change with the entry of Raúl, Juli and Imanol for Blanco, Andy and Miranda. One goal could change everything and it did. The reaction was almost immediate with the goal of Dani Vega in a great play after a pass from Mourad leaving Casemiro and Militao seated and sending the ball through the square. Explosion of joy in El Collao with the Alcoyano draw. The goal gave wings to the local team that was once again tuting Madrid.

But luck was not on the side of the Parras team who sentenced the game with two rebounds. The first with Asensio’s goal in the 76th minute, which fired after a great play and the ball found Raúl’s body, throwing off José Juan, who could do nothing to prevent the 1-2. Just two minutes later and with Alcoyano stunned, Isco took advantage of a fatal clearance to finish the match. Little else could the blue and white team do against a Madrid that came to have a bad time in various phases of the match. Fortune allied with the white team although Alcoyano never gave up and looked for the second goal until the final whistle. It did not arrive but the merit of the Parras team is great and that is how the public that filled the stadium recognized it. With a loud ovation, the fans dismissed his team. Now it’s time to change the chip again and focus on the League. Very high head for an exemplary Alcoyano who has made one dream again.