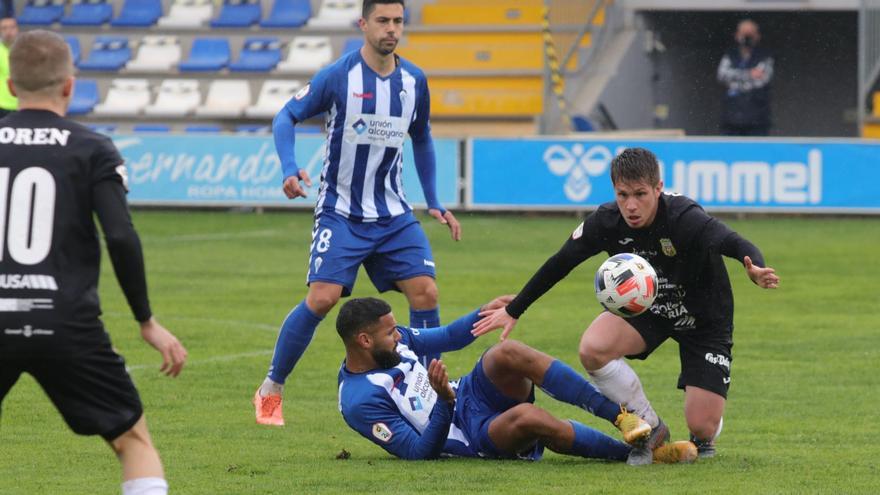 Alcoyano took a jug of cold water In the early stages of the match with Pereira’s goal after a clear defensive failure that left the Peña Deportiva player completely alone, shooting José Juan. For a few minutes the blue and white team was knocked out after the unexpected blow, but soon they were recovering sensations on a pitch that was very difficult to play due to the rain. Any ball to the goalkeeper was dangerous because it could be stopped at any moment.

Those of Vicente Parras took over the possession against a very solid rival in defense who conceded absolutely nothing. Alcoyano’s first shot on goal came in the 17th minute with a dangerous shot by Ángel López from the edge of the area that narrowly went wide. The possession did not last long for Alcoyano and the Peña Deportiva was looking for the second to sentence the game. Again Ángel sought the equalizer with another shot that was stopped without problems by the goalkeeper of the Ibizan team, very safe throughout the first half.

José Juan saved his team from 0-2 with two consecutive stops at the stroke of half an hour. The goalkeeper was quick to reflexes on two clear occasions for the visiting team and allowed Alcoyano to stay alive.

Before the break, the Parras team had another chance but Alberto Rubio’s shot went over the crossbar just a little.

Alcoyano came out in the second half much more incisive aware that a victory left him practically classified for Second B Pro. The Blue and Whites became the masters of the match in search of the tying goal. Mourad was close to achieving it after a free kick, fired inside the area but the ball went high.

Minutes later, José Juan again saved Alcoyano with two huge saves in two very dangerous actions by Fran Núñez. The group of El Collao that was desperate in search of the tie breathed. Parras trusted Ramón López and replaced Ángel. He had his first chance as soon as he entered the field but the goalkeeper of the Peña Deportiva deflected to a corner without problems.

The meeting was winning in emotion and intensityd. No one clearly dominated on an increasingly complicated lawn. The rival defense did not give a concession, the difficulty of approaching the area was very difficult and the center of the field was for the Peña Deportiva. Alcoyano did not find the formula to get the tie until Mourad he did it after a corner kick in the 78th minute in a play inside the area. The joy did not last more than a minute, which took the Peña Deportiva to go ahead again with a goal from Nacho López after being alone against José Juan. It was again another inexcusable defensive failure that condemned Alcoyano and deprived him of fighting for victory in the remainder of the game.

Parras’s team was already trying desperately. He was looking for a crucial point in his fight to finish in the top three and qualify for Second B Pro. There was no way to get to the opposite area clearly or to find dangerous occasions. Alcoyano fought with all their might but the defense of the Peña Deportiva was an impossible wall to cross.

The defeat was hard although Alcoyano depends on himself to finish in the top three. The Atzeneta and the Mestalla await you.