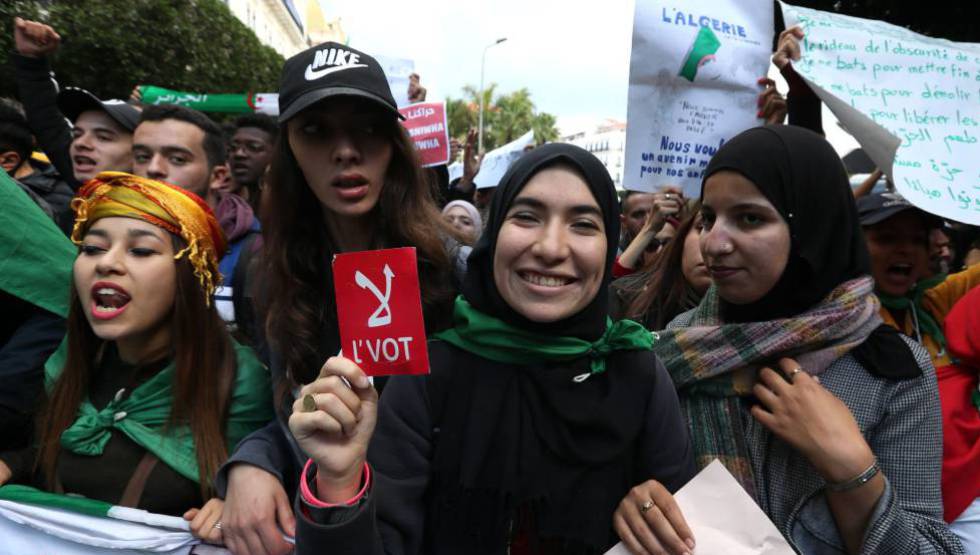 Many of the people participating in the demonstrations in Algeria against the candidacy of the president Abdelaziz Buteflika In order to run for a fifth term in the April elections, she is convinced that she has created a revolution. A revolution that overcame your first acid test on Friday, February 22, with tens of thousands of people in the streets, most of them men. The Monday It came on Friday, February 28, when hundreds of thousands of people of both sexes again challenged the regime. And the third test will arrive on March 8, during International Women’s Day.

The young filmmaker Sofia Djama, whose movie The Blessed It has received several international awards and rave reviews since it was released in 2017, he explains: “We have hit the streets and are smiling for the first time in many years. There are men, women with veils, without veils … We had a depressed, tired society. And on February 22 we have come out of our depression. It is very important that this Friday it fell on March 8 ”.

Several feminists, including 78-year-old Algerian lawyer and writer Wassyla Tamzali, have called for the march to be called for equality and freedom. “Without equality there is no freedom,” he says. “It is necessary that young women claim, at the same time as democracy, the right to equality in divorce, inheritance, sexual freedom … My generation did not believe that equality was possible.”

The veteran militant remembers that the philosopher Alain Badiou He has written that for a revolution to flourish, a square is needed. “We have already found the square; It is the Didouche street, which runs through the entire center of Algiers. It is the only spacious place where families can demonstrate calmly. Because the topography of the city makes streets too narrow, where it is easy to panic, both for protesters and for the police. We already have the square and the women have come. And when the women come “, Badiou concludes,” the revolution begins “

Like so many people these days in Algeria, Tamzali says she is surprised by the maturity of the citizens, by “the courage of the boys and girls.” But he does not want the same thing to happen that happened after independence, in 1962. “When the Algerian revolutionaries of the 1960s were told that it was necessary to talk about the equality of women and men, it was obvious to them. However, afterwards they left no evidence of that equality. Now that we are living a moment of fraternal poetry, it is difficult to imagine that as soon as this party is over we will forget women as it has been done until now.

Radio journalist Souhila Benali, 47, remembers from Algiers that every March 8 the regime tried to exploit the day. “Women used to be honored in the halls of the grand Aurassi hotel. But this Friday, for the first time in 20 years, women will be out on the street ”.

The Algerian regime has used feminist rhetoric on numerous occasions. On March 8, 2015, Munia Meslem, Minister of Solidarity, Family and the Status of Women, read a letter on behalf of Buteflika – who has not delivered a speech for seven years – in which the president promised: “There is than to remove the woman from her condition as a minor ”. And he promised to reform the family code to incorporate, among other issues, divorce at the initiative of the wife.

“Women fought in the maquis during the war of independence,” recalls Wassyla Tamzali. “But they came to power and forgot about them. Later, after the war with the Islamists in the 1990s, they seized power in the name of women’s rights. And what did they do? Nothing. They talk about freedoms, but then they assume the sharia, Islamic law. The first article of the new Constitution has to say that all beings are equal in rights and freedoms, without any restrictions. Islam must adapt to that. And not the other way around ”.

The regime also supported the National Union of Algerian Women (UNFA, for its acronym in French) which, in turn, always supported Buteflika even in her fifth candidacy. “This organization has no legitimacy to speak of feminism, it has betrayed women just as the FLN (National Liberation Front, the party that governs the country since its independence) betrayed democracy. Who is going to believe them? ”Asks Tamzali.

If there is something that irritates many of the protesters, it is when someone, whether a compatriot from Algeria or a foreigner, claims that the Islamists are on the prowl and they will reap the fruits of these protests. “That is just an Army strategy to scare people,” says Tamzali. Journalist Benali adds that political Islamism has no anchor in Algeria. “Algerians aspire to freedom, democracy and dignity. What has led us to decline and caused disorder is not Islamism or radicalism. It is the corruption, waste and incompetence of our rulers ”.

Women of all ages and social classes have been seen in the streets in a country where 45% of the population is under 25 years of age. The last famous woman to join the call was the former fighter of the war for independence Zohra Drif Bitat, 85 years old: “I reject that my country is subject to a parallel, hidden, illegal and illegitimate power,” she announced in a statement. released this Tuesday. “Let us march numerous and numerous on March 8,” he harangued.