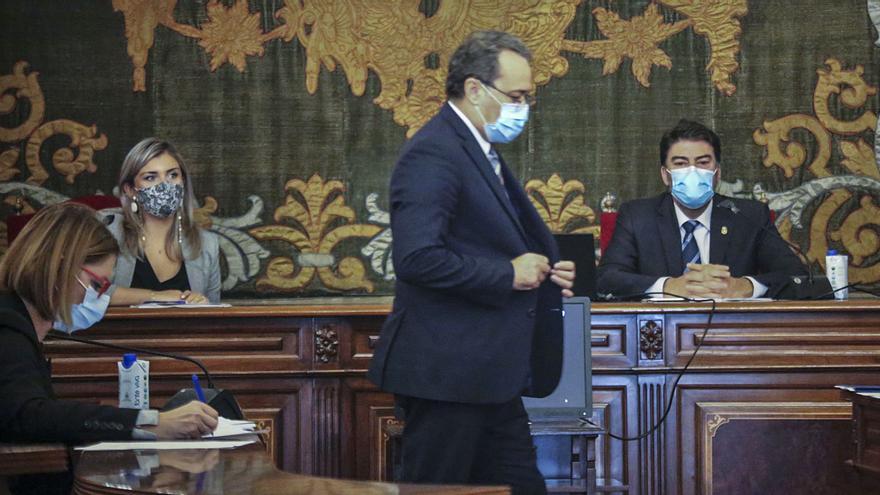 Alicante celebrated yesterday the Debate on the State of the City. After three and a half hours of hands outstretched to dialogue in the midst of a permanent cross of reproaches and criticism, the plenary session closed without the bipartisan putting on the table any new measures to face the deep socioeconomic crisis that the city is suffering. derived from a pandemic that broke out seven months ago and that has the entire country immersed in a harsh second wave. Without novel proposals that shed some light on a path more than gloomy, the debate was marked by the harsh tone. Initiatives, no; but reproaches … of all.

After a minute of silence for the victims that the coronavirus has left in the city, Barcala spoke for almost an hour [él no tenía tiempo máximo]. And he did it with a declaration of intentions in advance: «This debate must flee from the mere partisan dispute, from the mediocre skirmish, from putting the accent on what separates us, ignoring that what is so important and elevated is what has to unite us . He must emphasize what matters, which is nothing other than what our fellow citizens really care about, so many times far removed from what we stress nonsense ». Words that, in practice, did not translate into deeds.

The mayor boasted of social management during the first state of alarm; The opposition, in turn, held the “hunger tails” in his face and put the Councilor for Social Action at the center of criticism, Julia Llopis (PP). Barcala highlighted the twenty sections that were pedestrianized when the home confinement ended; and the opposition upset him that none of those kilometers are still traffic-free today. The mayor highlighted aid measures for the hospitality industry, with special permits for watchmen; while the opposition criticized their constant clashes with the sector: with alleged warnings not to support initiatives that emerged from the left and with the government itself promoting a hoax that was spread by the mayor of the branch, Lidia López (PP). Barcala stressed the reinforcement of services such as cleaning schools to avoid contagion and the opposition, in response, reproached him for keeping the main contracts of the city extended or paying outside the contract, a practice highly criticized from Intervention. The mayor also recalled for the umpteenth time that during this 2020 works have been executed or are being executed for 25 million euros, while the opposition forced him to remember: the budget execution last year -without a pandemic- was historically low, remaining in a scraping 13%. Barcala also stressed that Alicante approved the 2020 Budget in “full lockdown”. In other words, he did it almost six months late. And he not only spoke of his accounts: the mayor described the Generalitat’s Budget as a “patch” and regretted that the State “invests less than the minimum in the city of Alicante.”

And it is that Barcala, because otherwise it would not be Barcala, looked at Valencia and Madrid. And not sideways. He insisted a lot. And to talk about everything a little. The councilor criticized the management of the Botànic during the pandemic, from the social sphere (focusing the speech on the vice president and minister of Inclusive Policies, Monica Oltra) to the health worker (“there is no logical reason to hide vital information for decision-making”). He also looked at the central government of Sánchez and Iglesias, both for the management of municipal savings (“The attempt to seize the savings of Alicante failed miserably”) and collaboration with local governments (“The State left the city councils , and by extension, to a good part of the citizens ”), as for issues unrelated to the COVID crisis: such as Spanish in classrooms, Valencian in civil servants or the future of the concerted school. Partisan-style winks directed at his electorate and Genova street in Madrid, where the national headquarters of his party are located.

And speaking of the future of Alicante and to pave the way out of the coronavirus crisis, Barcala extended his hand to the municipal opposition, which he had previously accused of putting the defense of his own (in front of other governments): «I trust, and that is why I work, in which in a few years we remember that we have overcome this terrible test. And most importantly, that we did all this together, because only together could we overcome the situation. The City Council will contribute, to the extent of its possibilities, to recover what we lost. That is our obligation, our mission. And for this, I hope to have the support of all. Said it was.

From the other partner, Ciudadanos tried to flee from the confrontation in the first intervention of the vice mayor and orange spokesperson, Mari Carmen Sánchez. It was a mirage. In the turn of reply, given the general context, he fell into the trap, going from “this debate should focus on a constructive dialogue away from reproaches and political fights” to entering into close combat with the opposition. And in the promises, while Barcala maintained the commitment of a new General Urban Planning Plan (PGOU) for Alicante, Sánchez endorsed the commitment to a new Congress Center. Both projects were already discussed in the 2019 debate.

The deputy mayor in her first shift, like the mayor, extended her hand to the opposition, demanding less tension in the day to day: “Alicante need high-minded politicians to solve the real problems of our neighbors and move away from the tension. ‘

For the opposition, the Alicante bipartite is not the solution. The left agreed on that as a block. Vox was not an ally yesterday for the PP and Citizens either. In their speeches, the three progressive groups agreed on a multitude of common elements. Among them, the lack of dialogue spirit of the bipartisan (a direct dart to the mayor Barcala), which in the opinion of the PSOE, United We Can and Compromís weighs down the future of the city. In fact, more than one and two invited him to leave. The socialist Sanguino was one of them: «You are not and will never be able to approach the audacious, dialoguing, decisive and adaptive mayor that this city needs. You should start to think if this is really your job, if you can offer the city what you don’t have, or if you have to have the dignified attitude to leave for your benefit and especially for Alicante ». For the socialist leader, the bipartisan “has failed socially, economically and in governance”, also emphasizing the lack of participation in management. In his second intervention, where the tone led him to Barcala’s reprimand (“he has staged a performance of the Comedy Club”), Sanguino got up to hand PP and Cs (ignoring the “anticovid” measures) a decalogue with proposals. In public he did not explain any of those twenty points.

Since United we can criticism of the bipartisan management, in general, and that of Barcala, in particular, was no less: “Your time has run out. He has no other way out than to abandon an armchair that never belonged to him. A government that is the worst in the history of this city because it is a misrule, a set of vested interests to hold power, without ideas, without a project and above all that neither knows nor loves Alicante. The purple spokesman, Xavier López, stopped to reproach Barcala for turning his neck so much towards València and Madrid: “You, Mr. Barcala, learned from Castedo to oppose the opposition. To disengage from any responsibility, to coin improper skills as a mantra.

Commitment it also did. The municipal spokesman, Natxo Bellido, accused him of using the municipal office for his alleged political aspirations. “He has made a speech without hope, with no intention of amendment … We do not have a mayor, we have a deputy from the Cortes or Congress,” said the councilor of the orange formation, who spoke of a “very gray government, incapable of responding to the challenges of the present, without a city project ”. And the thing is that for Bellido, the blame is shared: «Barcala, you are not a good mayor and you have a very weak government team. And that is bad for the city and terrible in the current crisis. In his second moment, Bellido put proposals on the table. There were fourteen, the basis of a pact for a “protective” city, which begins with the withdrawal of the Ordinance against Begging and ends with the request to build bridges with Elche.

And in the face of criticism from the entire left, Vox Nor was he left behind in his analysis of the “post-covid” situation in the city of Alicante. The spokesperson for the ultra formation, Mario Ortolá, spoke of “lights and shadows”, although he focused more on the latter. “Political ups and downs, sticks in the wheels, fingers in the eyes and a sometimes unfortunate spectacle is what a coalition in a fragile situation offers,” defended Ortolá, who was especially hard on Ciudadanos for his nods to the PSOE at other political levels.

And after a double turn of interventions by the six municipal spokesmen, Barcala again took the floor as closing. Then, he asked for “hope and confidence in Alicante”, he reproached the opposition for dedicating the debate to “getting involved” with him (“they don’t charge for that”), while again reaching out (if everyone complies, government and opposition will not stop talking from now on), and analyzed what was seen from his chair: «This debate has not been up to par. No one can be proud of this Plenary Hall ». So it should have been.