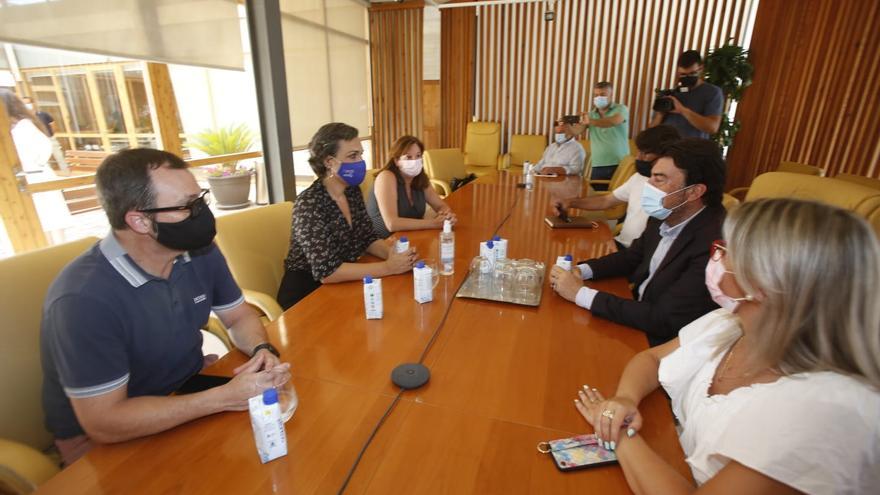 The mayor of Alicante, Luis Barcala, and the vice mayor, Mari carmen sanchez, have committed this Thursday “all the support” of the City Council to professionals in the hospitality, leisure and tourism industry, “Who are going through their worst moment since the end of the state of alarm”, has specified the mayor, “as a result of the new curfew announced by the Generalitat Valenciana. The municipal government team has met this noon with the representatives of the sector in the city, to whom they have confirmed that the council will maintain its economic aid, such as the 7.2 million injected through the Resist Plan, and other support measures such as tax exemptions and the extension of the watchmen “while the cuts and restrictions of the Consell continue.

Barcala and Mari Carmen Sánchez have transferred the support of the municipal government to the representatives of the hotel, restaurant and leisure sectors César Anca of ARA (Association of Restaurants of Alicante), Javier Gadeano of ALROA (Association of Leisure and Restoration Premises of Alicante), Victoria Puche President of APHA (Alicante Hotel Association) and Irene More Vice-president of FEPHA (Federation of Entrepreneurs of the Hospitality Industry of Alicante), in a meeting held at the Town Hall.

After emphasizing their commitment “to a union that represents 8.9% of GDP and employs more than 80,000 people in the province,” the mayor and the deputy mayor have demanded that the Consell increase vaccination and not criminalize the sectors of the hotel industry, catering and leisure, as well as young people, while they have demanded that the 3,000 health workers dismissed by the Generalitat be reinstated to their jobs and that the needs of health centers be addressed to face the health emergency .

Also Read  Three points against the wind for the Hercules

“We will continue to demand a mass vaccination, an increase in the rate of vaccination, which is done 24 hours, by appointment, questions that are being carried out in other places with good results ”, emphasized Barcala. “There are many communities that are already vaccinating those over 16 years of age, but the Consell continues without doing its homework, or justifying the scientific criteria by which it imposes the curfew in 77 municipalities, which is not giving the results they expected and only in six localities with restricted mobility have contagions decreased ”, he added.

The first mayor has stressed that the Valencian Community drags “a gap of 300,000 doses of vaccines and that another 100,000 inoculated to displaced citizens have not been compensated.” He has also criticized the “improvisation” of the Ministry of Health, “which was unable to modify its vaccination plan before the end of the academic year and now tries to blame the young people of this fifth wave when it is shown that a vaccine does much more than close a bar ”.

For her part, Mari Carmen Sánchez, has criticized that after the new restrictions of the Generalitat they transfer an image of Alicante and the Community “tremendously harmful in the middle of high season”, for which she has considered that “the entire tourism sector is denigrated , which has focused on complying with the measures and even expanded them, as reflected in the Strategic Plan and in the Alicante Segura campaign ”.

The vice mayor has stressed that “at the worst moment after 16 months of waiting, fighting and fulfilling the hospitality and tourism sector, all the efforts made have been thrown to the ground”, and, in reference to the imposition of the curfew, has stated that “the virus does not understand schedules and is spread the same at eight in the morning as at one in the morning.”

Also Read  The coral reefs of the Mexican Caribbean, at risk from sun creams | Science

Sánchez has defended that the tourism sector “is safe because the reports show it, and attention is being diverted” from the Generalitat of the underlying problem, which is “strictly sanitary.” At the same time, he has asked the Consell to “analyze what it is doing in health matters to stop the crisis and the numbers of infections. This is a health crisis and not a tourist crisis because we are suffering a pandemic, and for this reason we ask the Generalitat to improve the vaccination figures and recover the three thousand health workers dismissed because it is not a tourist crisis ”.