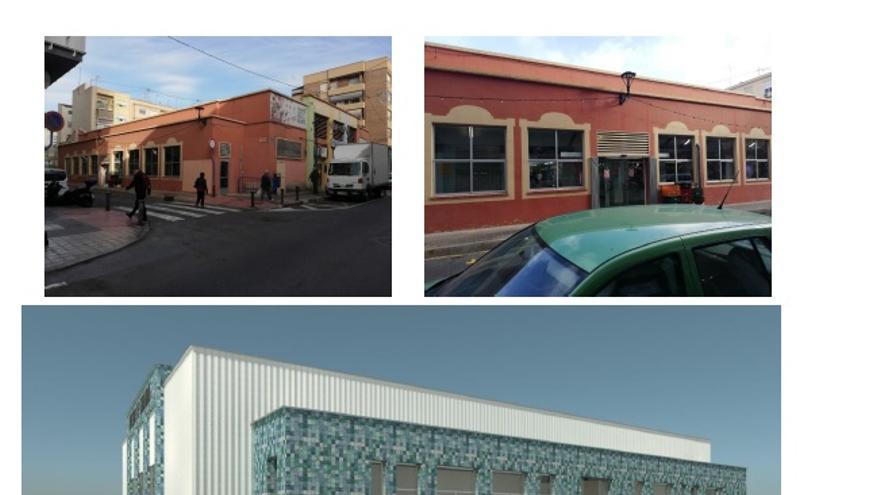 Councilor Lidia López has valued the work that is going to be carried out from the City Council, explaining that it is planned “The removal of its cover and replacement, remodeling of the entire facade with a more modern image of this municipal compound so used by the residents of Carolinas, fiber cement disassembly, and interventions inside the market ”.

The Carolinas neighborhood receives its name from the Caroline Islands of the Pacific Ocean, when an analogy is established between its urbanism of low and scattered houses with the shape of the archipelago, and its construction date also coinciding in 1898 with the loss of the Spanish government over the islands, explains the City Council. “That is why it has been proposed emulate island tones in the new facade cladding. The market image will be updated, with the incorporation of new coatings of façade that define a more contemporary urban image, with panels in galvanized and pre-lacquered steel base with perforations “.

Today the Regulatory Ordinance Municipal cemetery of Our Lady of Remedy, once the public information period has expired, that obtained the support of all political groups in the plenary session on April 30. “This new regulation is born improved to adapt it to the current legislation on funeral law, as well as to update the regulation of the different administrative procedures and services that are provided in the cemetery, since the operating regulations dates from 1940“, remember municipal sources.

The Councilor for Infrastructure, José Ramón González, has indicated that “this new standard is definitively approved after a great deal of technical work that has been carried out to manage the venue more effectively, achieving update the different procedures and administrative procedures that are carried out on the occasion of funeral activities, as well as the regulation of the use and enjoyment of the premises by all citizens ”.

The current regulation of the Municipal Cemetery is over 81 years old, and it has been adapted to the regulations. Among the modifications that have been regulated, is the include the order of adjudication of the graves to respect the correlative numbering of each burial unit, the order of arrival, “and from the first volley to the top, until all the tombs that have not been granted concession are occupied “, and also It has been included that any citizen may choose for economic reasons, as long as there is availability, higher volleys even having the right to a lower volley.

On the other hand, the plan for the improvement and modernization of the sports facilities in Alicante, which has € 759,853.68 to remodel and renovate six 11 and 7 municipal soccer fields located in the San Blas Sports Centers, Florida Babel, as well as the facilities of the Tómbola sports center that will improve the building, changing rooms and energy efficiency, through four projects that the Department of Infrastructure takes to the next Governing Board for approval, in coordination with the Department of Sports.

Also Read  UN: Natalia Vodianova, a life at the service of philanthropy | People

The works of the football fields have a execution period of two months.

The Governing Board has approved the call for an open procedure to contract the execution of the “Works to improve mobility and accessibility within the scope of the District Board No. 2. Alicante 2021” in the Pla and Juan XXIII neighborhoods, at the proposal of the Department of Mobility, with a Bid budget of € 185,936.17 and with a 3-month execution period.

Specifically, it is the access to the Agustinos and CEIP Carlos Arniches schools, as well as the entrance itinerary to the Pla Health Center, next to the MARQ, down Doctor Sapena street and adaptation of pedestrian crossings in Plaza Estella. This action is linked to the improvement of the itineraries that give access to the General Hospital of Alicante, recently approved.

The City Council has approved the modifications to the Health and Safety Plan for the works included in the demolition project for the empty and evicted building on Diputado José Luis Barceló street. This is the last previous step for the definitive demolition of this building, located in the vicinity of the Carmen neighborhood in the area of ​​influence of the Vía Parque, and which is an action in which the City Council has been working since the development of this great bypass road of the city, conclude the same sources.

Also Read  The trick to sleep more, much better and cheaper