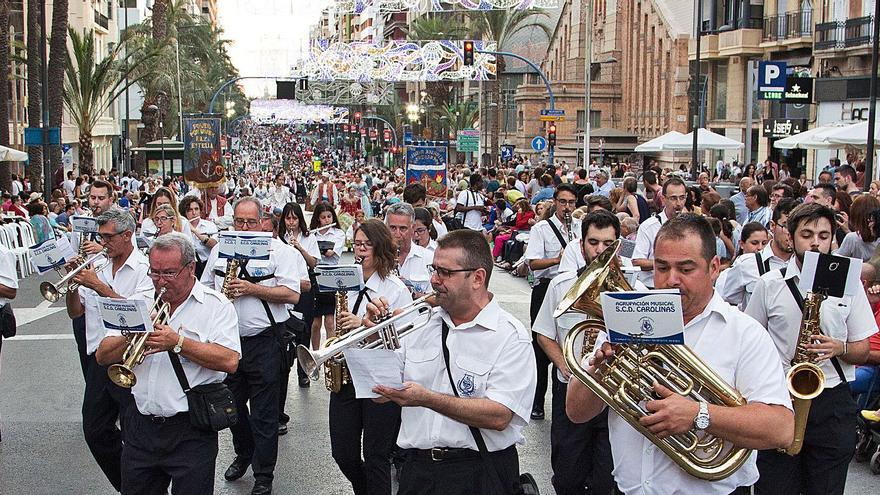 Music is part of the culture of each neighborhood and city, it arouses interest in knowing the roots of the town, its history and its idiosyncrasy. Along with the musical aspect, the Festival involves the knowledge of customs, customs, folklore, clothing, gastronomy, in short, all the relevant aspects that define and delimit a town. For this reason, the bands and collas are the maximum representatives of the tradition of each neighborhood of Alicante, accompanying each of the festivities, be it the much-loved Bonfires of Sant Joan, the spectacular Moors and Christians, popular celebrations or even the Semana Santa

Now, despite not being able to fully celebrate any of these festivities, the more than a thousand musicians in the municipality continue to prepare for when they return, conducting rehearsals and putting all their enthusiasm and desire. After this very complicated year, due to the pandemic, now the situation is improving and performances and concerts are beginning to resume, thus enjoying some music in the streets.

This year, to somehow celebrate the Bonfires of Sant Joan, four bonfire music concerts have been held in which the main musical groups in Alicante have participated. Likewise, this summer there will also be concerts and performances as a way to support the safe culture, music and tradition that unites us all. «With concerts like the one on June 22, we hooked people to motivate themselves and move on. There were several who asked us at the end, next year they will begin to teach with us, “said Rubén Urbán, president of the Colla de San Blas.

Four bands and five officially constituted collas are the main representatives of the city’s music. But, apart from these bands and collas, Alicante has more musical groups not officially constituted. All of them have become essential elements for the celebration of any of these special days. The bands and collas of dolçaina and tabalet enliven the parades, parades, awakenings, processions or mascletás playing traditional pieces.

The sound of the xirimita accompanies every corner of the city, as a true sign of identity. In the official acts of the Bonfires, more than two thousand musicians show their technical skills and lung bellows every year.

The four music bands established in the city of Alicante have a deep-rooted tradition and a long history. One of the oldest bands in the Valencian Community is the “La Amistad” Musical Society of Villafranqueza. It has its origins around the year 1856, it is made up of 200 members, 90 musicians and 60 students who teach at its school. «During the pandemic, there has been a clear drop in the attendance of musicians at rehearsals and concerts of this stage, with about 50 musicians attending the concerts. As for the number of members and students, there has been a drop, but not very notable, “explains Iván Arques, president of the Villafranqueza” La Amistad “Musical Society.

He also highlights that “the most painful decision was to adapt our auditorium, an assembly hall that has been the headquarters of our band for more than 35 years. Due to force majeure and to comply with the regulations on capacity and separation between musicians, we had to dismantle part of our premises. We were forced to remove 200 seats to use our own stalls together with the stage and to continue with the entire band rehearsals ».

Another of the oldest bands, whose origins date back to 1958 is the Unión Musical de Ciudad de Asís. This band was established as a non-profit association and was registered in the National Registry of Associations in 1992. The main band’s staff is about 80 musicians and each year it incorporates several students who finish the elementary grade in their school. “The covid has affected us all due to the suspension of the activity, the school is still alive in a blended way and it has been a great effort to resume face-to-face classes. The conditions of our premises have not allowed us to rehearse, so the city council gave us an outdoor space and now we have been rehearsing in Mutxamel for approximately several weeks, ”explains José Pascual Soler, president of the Ciudad de Asís Musical Society.

For his part, Vicente José Navarro, president of the Carolinas Musical Group, highlights that “the situation caused by covid-19 has affected us very negatively, even so we are very fortunate to have the cultural classroom to be able to rehearse with safety distances and sanitary measures. We must continue fighting so that the music does not decline. The parties are a way of financing for us, although I have to admit that there are many people who have helped us this year by organizing concerts and different performances ». The Carolinas Musical Group was founded in 1975, the result of the restlessness and musical hobby of a group of musicians. This group found the ideal cultural environment for the formation of a music band and offered its first concert in the Culture Room of the then Savings Bank of Alicante and Murcia. In 1976 he was presented to the 9th Pasodobles Contest in Alicante, obtaining the 2nd prize. From that moment on, the prestige of the group increased, participating in cultural campaigns in schools, official city festivals and in different festivals and cultural events in most of the towns in the province.

On the other hand, one of the youngest bands, l’Harmonia Sociedad Musical, was founded in August 2005 with two objectives: educational and informative. For the first, the music school was created with the purpose of offering musical training from an early age. Regarding its informative work, it currently has a symphonic band with 80 federated musicians, a children’s band, a young band, an ensemble of clarinets, saxophones, and a big band. “We must highlight the great interest and willingness of the musicians and their families to try to keep the spark of music burning despite the situation,” remarks José Tomás Moñinos, director of l’Harmonia Sociedad Musical.

Currently, traditional music is on the rise, especially a clear trend has been seen in the last 30 years, since the different collas have been institutionalized as cultural associations. «Traditional music is very street and interacting with the one in front of you and that is precisely what we have not been able to do this last year. The performances that have taken place this year have been static concerts on stage and traditional music is not prepared for that, this musical style is to be danced, enjoyed and sung on the street in the neighborhoods with the people “, emphasizes José Blas Herrero , president of the Federation of Folklore d’Alacant and president of the Colla de l’Embolic.

«More than a resurgence in this musical style, there has been a discovery by society that has not hesitated to integrate it into its festive and cultural traditions and a growing interest in learning this ‘style’ since the number of students in our school and in that of other collas it does not stop growing, as well as the number of existing collas ”, highlights Carlos Cruzado, president of Colla Dolçainers and Tabaleters Sant Antoni d´Alacant.

In this way, Ana Uroz, secretary of the Colla d’Alacant affirms that the dolçainers and tabaleters themselves have evolved towards other more current repertoires without losing the traditional ones, merging. “A good level of musical education is also very important, necessary to increase the artistic and technical level so that music continues to grow and evolve.”

Compositions that give life to party music

The Party needs its own, specific type of music, music that the celebrant identifies, and demands a genuine rhythm that is in accordance with the parade. This has been classified as festive music, which has been written by and for the Fiesta, which has given rise to different musical forms that are interpreted by different music bands. One of the most important works is the hymn “Fogueres de Sant Joan” by maestro Torregrosa, a high-quality composition that is played at every act of the festival. Regarding the Music of Moors and Christians or, what is the same, the festive music for the parade (pasodobles, Moorish and Christian marches) is a type of music linked to the military genre, to the parade music that It is related to the soldadesca or festive militia and the patronal feast. This festival has developed, in addition to the pasodoble, the Moorish march and the Christian march, other characteristic subgenres such as the pasodobles marxa, pas-moro, procession marches, symphonic poems, dances, party hymns, hymns of Filaes, patron hymns, ballets or incidental music for pageantry. Without a doubt, festive music has become a true hallmark.