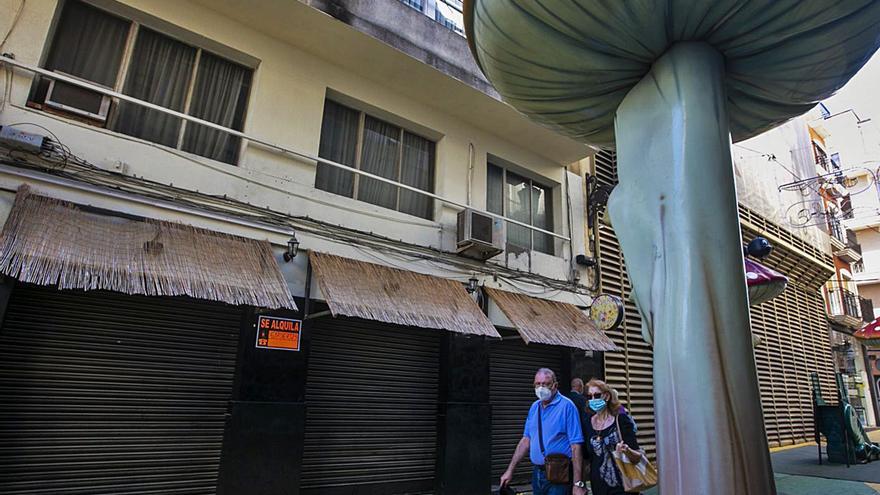 If only a few weeks ago a report from the Chamber of Commerce and the Sabadell Bank warned that the Alicante economy had fallen more than double the national average, now it is the data on the evolution of the productive fabric that once again corroborates that the impact of the crisis caused by the coronavirus it is being considerably higher in the province. So much so that the demarcation concentrates more than half of all the companies that disappeared in the Valencian Community During last year.

This is revealed by the latest report on companies registered in the Social Security of the Statistical Portal of the Generalitat, which counts those companies with a contribution code, that is, those that have at least one salaried worker registered. According to this study, Alicante closed last year with 57,262 active companies, which means that 2,296 firms were left on the road, 3.9% of the total. In contrast, Castellón lost 417 companies (2.2%) and Valencia, despite its larger size, only 1,734 (2.3%).

For the Director of Studies at Ineca, Francisco Llopis, There is no doubt that these figures respond to the greater weight of the activities in the province that have been most directly affected by the limitations to curb the pandemic, such as tourism. Thus, the region where the most business fabric has been destroyed is the Marina Baixa, where the situation of the city of Benidorm stands out. The tourist capital of the Costa Blanca has seen disappear in this time 11.99% of companies with workers that it had at the end of 2019, more than triple the provincial average, due to its high dependence on foreign visitors and the hotel business.

Behind of Benidorm, the most affected municipalities are Torrevieja and l’Alfàs del Pi, where more than 7% of the companies with workers that there were a year ago have evaporated.

However, as Llopis emphasizes, tourist areas are not the only ones affected and there has also been a considerable drop in the number of active firms in municipalities of Vinalopó such as Novelda, Villena, Petrer or Elda. In the first case, due to the crisis that the marble sector is experiencing, which is weighing down the entire economy of the population, and in the others, due to the impact that the pandemic has also had on the footwear and leather goods industry, which is highly affected by the fall in consumption, as they are fashion products. In this way, Elche also presents figures worse than the average, with 4% fewer companies than at the end of 2019.

Conversely, the regions of l’Alcoià and Comtat have shown greater resistance to the effects of the covid in the economic field, by losing only 2.7% and 3.6% of its productive fabric, respectively, thanks to its specialization in industries that have had more demand, such as plastic or textiles, which have been converted during the pandemic. In the same way, l’Alacantí has ​​also suffered a minor decline, especially due to the good performance of the city of Alicante, which has only lost 2.2% of its companies.

Now the big question is to know what will happen in the coming months. «The key is to know when the vaccination percentage will be reached that will allow us to recover a certain normality. The later that point is reached, the more permanent the damage will be, ”says José María Gómez Gras, professor of Business Organization at the UMH, who also highlights the importance of public support, through ERTE and the ICO, to avoid further business mortality at this time.

Agriculture is the only one that manages to grow

Statistics on business demographics reflect that agriculture was the only sector that managed to increase its activity in the province last year. Of the 1,921 companies dedicated to this activity that existed at the beginning of the year, it rose to 1,976. Construction managed more or less to maintain itself, with 6,158 companies, only 24 less. The industry lost 277 firms, to 5,787; while 2,052 companies with workers disappeared in services, reaching 43,339, according to the Statistical Portal of the Generalitat. In the whole Community, 4,500 signatures disappeared.

New restrictions on hospitality and commerce accelerate the pace of applications

The new restrictions imposed on hospitality and commerce to curb the third wave of the coronavirus have caused a new avalanche of requests for suspension of employment before the labor authority. If the first week immediately after the Generalitat decree, a considerable increase in requests was already noted -with 933 new ERTEs, affecting 3,816 workers-, the new data update, which includes up to the 31st, shows a clear acceleration of this phenomenon. Thus, last week up to 1,693 new files were presented in the province, which involved the suspension of employment or the reduction of working hours of 6,817 workers, which raises the total of those affected since the new measures to curb the pandemic were launched. to 10,633, according to data from the Ministry of Economy.

Figures that show the impact that these restrictions have had on economic activity. As was foreseeable, up to 95% of the new ERTE -1,610- are concentrated in the service sector, which is the one that encompasses restaurants and shops, the two branches of activity directly affected by the new limitations. In the first case, it must be remembered that the Generalitat has decreed the closure of all the hotel industry and only allows take away food to be served; while stores have had their hours cut and must close at six in the afternoon. For its part, the industry only adds 22 new applications in the province; construction, one; while in agriculture there were none.