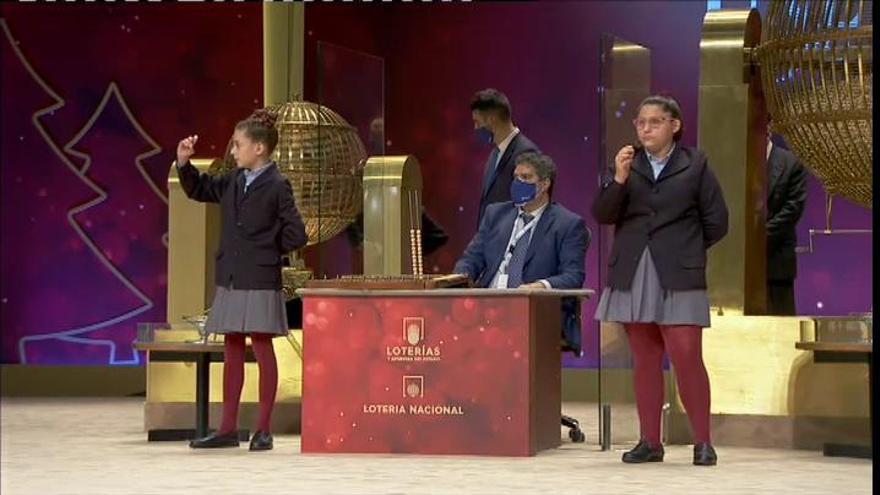 At 9.17 am, just one minute after the start of the draw, the girl from the Residencia Internado de San Ildefonso in Madrid Noura Akrouh has sung the number 86986, while Elizabeth Obarisiagbon proclaimed that she was the winner with the first fifth prize.

Just three minutes later, on the second wire of this first table, the girls have sung 37023, awarded the second fifth. Calmly and safely, the two little girls have been singing the stone, with no other outstanding anecdotes than a ball stuck in the outlet of the bass drum, already on the tenth wire, and another that has fallen to the sand-colored carpet that covers the tables of the stage of the Royal Theater of Madrid.

The number 19371 It has been sold in Zaragoza, Madrid and several Madrid towns such as Alcorcón and Torrejón de Ardoz, as well as in Don Benito (Badajoz), Alcázar de San Juan (Ciudad real), Palamós (Girona), Lourenzá (Lugo) and Roquetas de Mar ( Almería), among other towns.

Did you win the Christmas Lottery? Here we explain what you can do in 5 steps.

In addition, the draw for the Christmas Lottery 2020 It is celebrated this year at the Teatro Real in Madrid with important anticovid measures.

These are the prizes of the Christmas Lottery:

Numbers before and after the 1st prize: two prizes of 20,000 euros

Numbers before and after the 2nd prize: two prizes of 12,500 euros

Numbers before and after the 3rd prize: two prizes of 9,600 euros