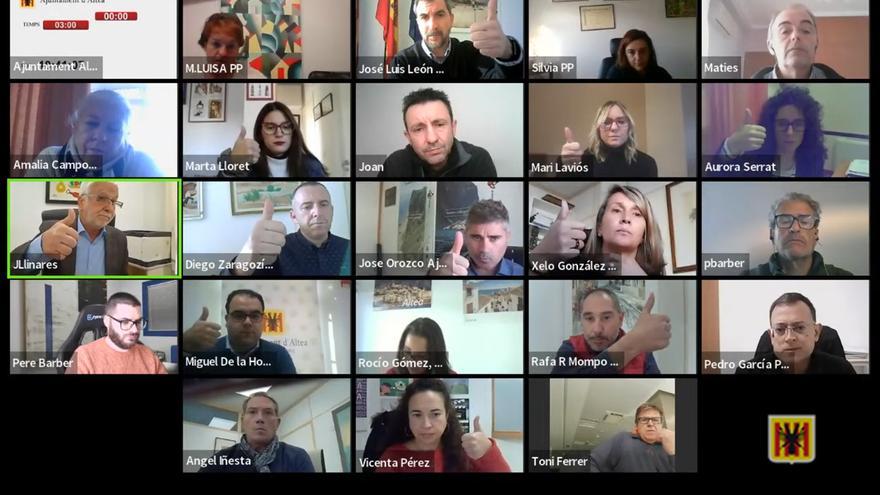 The Altea City Council approved, in an extraordinary plenary session held electronically this Tuesday, the municipal budgets for the year 2022 for an amount of 35 million euros, three more than those of this year. Of these budgets, approved with the favorable votes of the government team (Compromís and PSOE), the abstention of Citizens, and the vote against the PP,

highlights the investment in Social Services of 1.21 million euros “to help the most vulnerable citizens,” according to the mayor of Hacienda Xelo González. These budgets also stand out, in which the Urban Planning and Water Cycle items are doubled compared to the 2021 budgets, and the “considerable reduction in municipal debt that the government team found in 2015, after governing the PP, with 20 million of bank debt and 20 million more in contingent liabilities to reach a current debt of 5 million euros. In other words, judgments and undue income that we are returning little by little ”, stated González.

The head of the Treasury stressed that the budget brought to debate for approval “takes into account social services with the support and help of people. Thanks to the temporary disappearance of the spending rule, we have been able to make more necessary investments for our municipality and thus cover the needs of all the people of El Alto ”. Xelo González affirmed, however, that “it is important to remember that the budget is a living document, a work tool that is constantly evolving where we are making credit modifications, as needs change, throughout the entire annuity” .

In the budgets presented and initially approved in plenary session in the absence of their final approval in early 2022 after passing a period of allegations, important actions in the municipality stand out, such as the rental of the land for parking in Altea la Vella, investments in infrastructures in Convento and L’Alfàs del Pi streets, with a budget of more than 300,000 euros; another 172,000 euros for the City Council’s contribution to a work financed for Avenida Comunitat Valenciana; the air conditioning of the Palau Altea and the Cultural Center of Altea la Vella at a total cost of 450,000 euros; in addition to 340,000 euros more to condition the municipal swimming pool, and about 200,000 euros for the control of the capacity of beaches and old town, which will have a third part of the subsidy with the tourism sustainability plans at the destination.

The Councilor for Finance stressed that in 2022 “the City Council will continue with its policy of investing in citizens, for which 1.2 million euros have been allocated to Social Services, including subsidies, social assistance and emergency actions for the most needy ”.

In the area of ​​Urbanism, Xelo González explained that “its budget is doubled, where among its different actions the rehabilitation of a property on La Sèquia street stands out.” And in Ciclo Hídrico, “the figures also double with respect to last year, almost a million euros more, to act mainly in the sanitation of Sol, Portal Vell, Alacant, Empedrat and Remei streets in the old town, as well as in San Pedro Street and the Paseo del Mediterráneo ”.

During the presentation of the budgets, the head of the Treasury pointed out that in Citizen Security “there are 100,000 euros more than in 2021, of which 75,867 euros will go to the installation of an intelligent video surveillance system, also subsidized, in a third part, with the tourism sustainability plan at the destination ”. Likewise, he indicated that in the area of ​​Tourism, “almost 200,000 euros will be allocated to carry out actions of the sustainability plans, also subsidized by the Generalitat and the Ministry”, and that in Education “around 100,000 euros will be invested in contracting more teachers for English courses in adult training, and in furniture for the same center ”.

The 2022 budgets also contemplate the state of the City Council’s debt. According to Xelo González, “we have greatly reduced our debt thanks to the efforts made from the economic area, both in this legislature and in the past. In 2015 we came to govern, replacing the PP, with the City Council in debt by almost 40 million euros corresponding to 20 million of bank debt and 20 million more in contingent liabilities, that is, judgments and undue income that we are returning little by little. We now have a debt of 5 million euros, and our goal is to achieve zero debt for the City Council in the shortest possible time. Regarding the undue income from the Los Puentes del Algar Partial Plan, where we had to return more than 7.5 million euros by court ruling, we currently owe 800,000 euros, for which it is estimated that it will be liquidated in the next year ”, pointed out González.