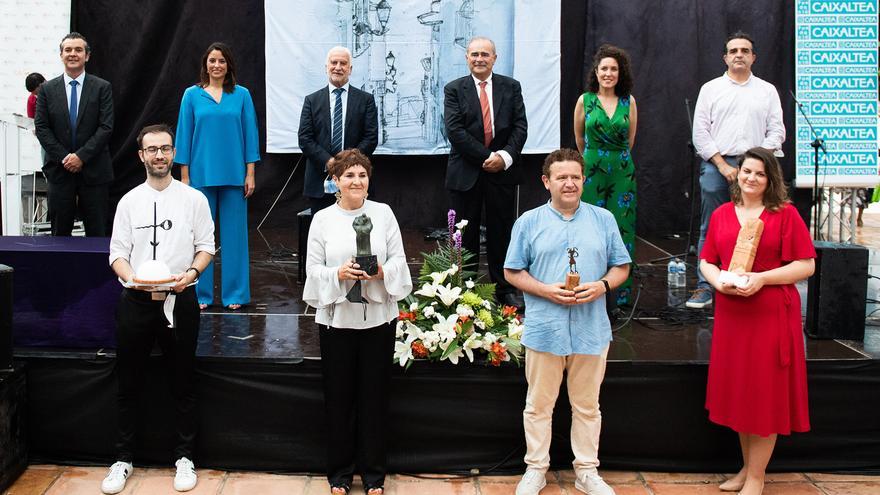 Altea became last Saturday evening the Capital of Valencian Letters contemporaries with the celebration of the 2021 Literature and Research Awards Gala which was held in the auditorium of Plaça de l’Aigua. The event was presented by the journalist of the regional channel À Punt, Vanessa Gregori, and was enlivened by the Orquestra Blava. The evolution of the pandemic prevented the event from being held on the eve of Palm Sunday in the viewpoint of the Palau Altea as has been customary since 2017 (in 2020 the gala was held in November for the same cause of COVID-19), which is why why this fifth edition of the Altea Award It was carried out in the open air with the pertinent health and safety measures. The rain appeared shortly after the event began, but the attendees held on until the end.

At the gala, the Altea painter Batiste San Rok (1937-2016) was honored and throughout it the winners of the three modalities of the Altea Awards (Premi Francesc Martínez i Martínez d’Assaig i Investigació, Premi Altea de Literatura Infantil y Juvenil, and Premi Carmelina Sánchez-Cutillas de Novel·la i Prosa Creativa) to which 161 works had been presented in total. Of these, the Sabadell librarian Jordi Bosch Canalias won the “Francesc Martínez i Martínez” with his work “The poem Coral romput: Estellés i Ovidi, el text i la paraula”, the playwright and scriptwriter Ignasi Garcia i Barba (Barcelona) achieved With her work “El bosc de les ombres” the Prize for Children’s and Young People’s Literature, and finally the high school philosophy professor Elvira Cambrils (Pego) obtained the “Carmelina Sánchez-Cutillas” with her novel “Aire”.

Taking as a common thread the work “Matèria de Bretanya”, by the writer Carmelina Sánchez-Cutillas, named Valencian writer of the year 2020-2021 by the Valencian Academy of Llengua, different fragments of the book were read by Vanessa Gregori as a previous step to the different interventions by the representatives of the institutions that support and endorse these ‘Premis’: Joan Borja, director of the Enric Valor Chair at the University of Alicante; Aurora Serrat, Councilor for Culture of the Altea City Council; Miquel González, director of the Department of Art and Visual Communication of the Alicante Institute of Culture Juan Gil-Albert; Imma Orozco, regional secretary for Territorial Policy, Urbanism and Landscape representing the Ministry of Culture; José Miguel Cortés, president of the Fundació Caixaltea; and Jaume Llinares, mayor of Altea.

Joan Borja, alma mater of these ‘Premis’, began the parliaments by announcing that the winning works will be presented in society next autumn once they are printed, and thanked the selfless contribution of the owners of more than 300 works by Batiste San Rok that during the gala they were displayed on a giant video screen. Borja was also pleased that the gala coincided with the proximity of the commemoration of the centenary of the birth of Sánchez-Cutillas that will take place on the 23rd.

For her part, the Councilor for Culture stated that the Altea awards project “has grown successfully dodging the pandemic and reaching this fifth edition in good health.” Aurora Serrat thanked the participation of the 161 authors presented in this edition, “a record of works with which the members of the different juries have had to work hard to read them in a month and issue their verdict”. The mayor praised the figure of Batiste San Rok “described by Rafael Alberti as the Van Gog of Altea” and made a synopsis of his life and work. Batiste San Rok was honored with the Estela d’Honor Award, a distinction that was going to be awarded to him in the 2020 edition but which was postponed due to the coronavirus pandemic. The Estela d’Honor was conceived to recognize the memory of the Altean creators or writers who, now disappeared, stood out and have vitally excelled in the field of art, literature or research. The first was dedicated in 2017 to the writer and researcher Ramón Llorens, in 2018 the painter Joan Navarro Ramón was honored, and in 2019 the award was given to the folklorist and writer Francesc Martínez i Martínez. The San Rok award was collected by his niece Inés Giner Mataix who thanked her aunt Concha, Batiste’s wife, for this award.

Immediately afterwards, Miquel González, on behalf of the Juan Gil-Albert Institute, stated that this institution “will continue to support these Altea Awards” and stressed the importance of Culture “that the institute has continued to carry out despite the pandemic, using the new streaming technologies ”. After his words, the winner of the Premi Francesc Martínez i Martínez d’Assaig i Investigació was announced, which went to the work “El poem Coral romput: Estellés i Ovidi, el text i la paraula” by Jordi Bosch Canalias. The author indicated that his work, “is an unfinished doctoral thesis with more than 250 pages that carries out an exhaustive analysis of the poem ‘Coral romput’ by Vicent Andrés Estellés. Once the analysis of the poetic text has been carried out, the process of transduction of the work is studied with the declamation of Ovidi Monitor, analyzing an unpublished text by the actor from Alcoi, with whom he recited in Sitges in 1993, and the musical version of 1979 with the composer Toti Soler to analyze the reading made by the Valencian singer-songwriter and the dramaturgy for his declamation ”.

Vanessa Gregori continued presenting the act with the passage from “Matèria de Bretanya” in which Carmelina Sánchez-Cutillas defines as the afternoons it rained “tota la colla de menuts anàvem a casa la mare Paula, i miravem caure l’aigua, que queia silence and rhythmic. Gloc, gloc, gloc… ”. And at that moment the downpour began causing the musicians of the Orquestra Blava to leave the stage to protect their expensive instruments. The audience endured the rain in their seats. Some of the attendees, wary of the clouds that had covered the sky all day, opened their umbrellas, and the act continued.

It was time to get to know the winning work of the Altea Prize for Children’s and Young People’s Literature, and to deliver it was commissioned by the regional secretary for Territorial Policy, Urbanism and Landscape, Imma Orozco. This, who was councilor for Urban Planning of Altea when the “Premis” began, affirmed that these “are proof of the importance of Altea in Culture and its positioning as Valencian cultural capital”. After reading the minutes of the jury, the winning work was announced: “El bosc de les ombres”, by Ignasi Garcia i Barba (Barcelona), playwright and scriptwriter of series such as “Un paso ahead” (Antena 3), ” Los Serrano ”(Telecinco) or“ Yo soy Bea ”(Telecinco). The winner indicated that the award-winning work “combines the supernatural thriller and the adventure novel to create a story in the style of the ‘Stranger things’ series, where our own shadow becomes our worst enemy.” Garcia i Barba pointed out that “the origin of this novel is a story that I wrote when I was 16 years old, entitled ‘L’ombra òrfena’ (The orphan shadow), where a man died suddenly without giving time to react to his shadow, who was wandering alone around the world ”, and added that“ after many years of exclusively writing theater, I decided to try my luck with narrative. ‘El bosc de les ombres’ is my second novel, and the first to be awarded ”. Finally, the author stated that one of the objectives he had when writing this work “was to give young people guidelines to overcome the death of a loved one.”

Before announcing the winning work of the Premi Carmelina Sánchez-Cutillas de Novel·la i Prosa Creativa, president of the Caixaltea Foundation, José Miguel Cortés, said that “the plus of participation in these awards from 120 works in 2020 to 161 works This year it may be due to the coronavirus pandemic that, in addition to leading us to ruin, has had the quality of making us stay home with more time to devote to pen and paper activities instead of sneakers and sports. It is the explanation that I see for the increase in participation in the Altea awards. Caixaltea continues to support, year after year, everything that is important for the people and the region, ”he said.

After reading the minutes of the jury, the novel awarded with the title “Aire”, by Elvira Cambrils (Pego), was released. The author felt “very lucky and grateful to receive the ‘Carmelina Sánchez-Cutillas’ on the centenary of the birth of the ‘Escritora de l’Any’, a literary mother who showed me the beauty of our language to recreate the landscapes that make us up. This award is an incentive to continue advancing in the literary adventure ”, he added. Cambrils said that “there are novels that you want to write and others that want to be written. ‘Aire’, the award-winning novel, is one of the second ”. Regarding this work, she explained that “the women of Aire, gathered in a beauty salon in an urbanization by the sea, appeared before me, questioning me with their frustrations and hopes, and I could not resist listening to them. Ordinary women with whom we live outside of fiction who, little by little, wake up from the patriarchal dream and feel like the protagonists of their own history, the only thing that is really theirs. ‘Aire’ intends to intertwine the philosophical perspective that confronts reality from within each of the seven protagonists of the novel with the poetic gaze that seeks beauty in small things. It is a metaphor of resilience that is imposed little by little, by feedback, among women capable of attending to the silences of others and feeling understood: air that fills their lungs for a new immersion in the waters of life, which it gives them strength to throw themselves into the arms of second chances before they all run out ”.

The event was closed by Mayor Jaume Llinares thanking those present for their presence “despite the rain.” He pointed out that he had prepared a speech “that I will not say because I do not want us to continue getting wet.” He congratulated the family of Batiste San Rok and the winners of the Altea Awards and called on “the public and the people of El Alto to enjoy the gala of the sixth edition that will take place next year at the Palau Altea.”