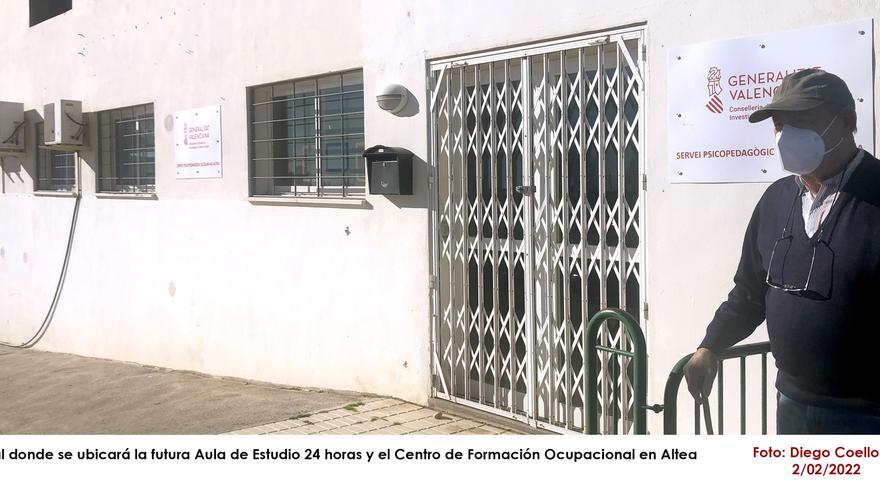 The winning project of the fifth edition of the Participatory Budgets of Altea, “24-hour study room”, which was announced on January 20, will soon see the light after agreeing with the departments of Citizen Participation and Promotion of Employment and of Education that the ideal place “is the municipal premises located in the Camí del Algar and in front of the parking lot adjacent to the sports center, where the School Psychopedagogical Service (SPE) was located, which is now empty because this service is currently provided in schools and institutes of the people”, as announced this Thursday by councilors Mari Antonia Lavios (Citizen Participation and Promotion of Employment) and Vicenta Pérez (Education).

The councilors indicated that the 24-hour Study Classroom “will be regulated for students who request the service”, and added that “the 345 square meter premises will house the new Occupational Training Center with training rooms and computer rooms equipped with of the technical requirements necessary for the workshops and courses that are taught”.

Mari Antonia Lavios explained that the two projects “will be located separately in the same space, in such a way that their access, by magnetic card or fingerprint reading, will be independent for users.” The mayor of Citizen Participation and Promotion of Employment affirmed that the place “is ideal because it has a large parking area next to it, which facilitates access for students”, and added that “the ruling has already been signed to draw up the Projects”. On Occupational Training, the mayor said that “it will comply with all the requirements of approval with current regulations, in order to cover the wide range of possibilities for both training, guidance and job placement.”

Vicenta Pérez added that the 24-hour study room “was a much-requested demand among Altea students and their families. Regarding job placement, it is one of the issues that concerns us the most, especially in the time of the pandemic, so it is very important to be able to unite them in this project”, he asserted. In this way, “all efforts are added to be able to cover the training needs as well as those necessary to have this space so that students can use the space at any time”, he added.

Use of the Permanent School for Adults

On the other hand, the two councilors stated that “although these two new projects are important, we must also take advantage of the facilities that we already have, such as the Permanent School for Adults (EPA) to be certified and homologated with respect to the regulations of occupational training courses, that yes, without prejudice to the training that is currently being carried out within said school”, for which “the homologation and use of the EPA will be requested to be able to be used as long as it does not interfere in the schedule and in the day by day of the cycles and studies that are being carried out there”, specified Vicenta Pérez.

Finally, Mari Antonia Lavios emphasized the importance of “joining efforts and synergies to have as soon as possible, within this year, this Occupational Training Center that adds to the work that has already been carried out by this council with other entities such as the Chamber of Commerce or the Spanish Red Cross, and thus be able to help the groups that suffer the most such as women, those over 45 years of age, young people and groups that are especially vulnerable to access the labor market”.