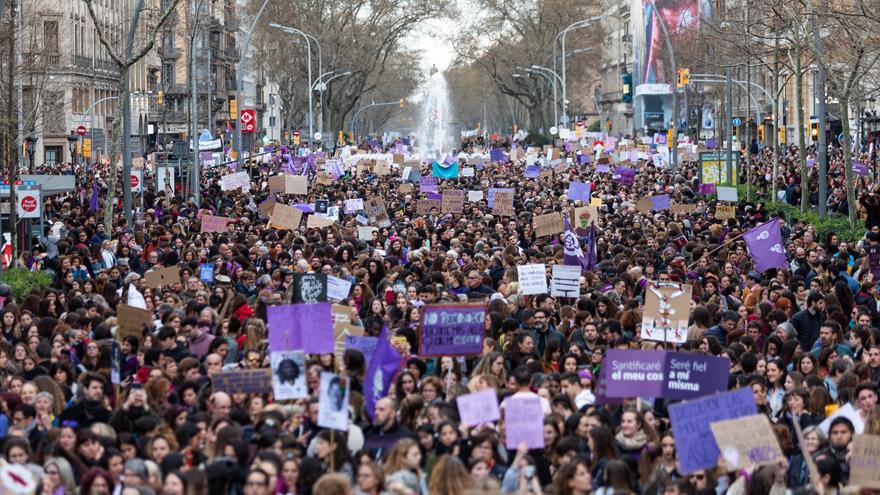 The feminist movement faces its most difficult 8M: the coronavirus pandemic, which has severely affected women and caused a global decline in their rights, hinders mass mobilizations and forces containment and prudence when demand is more necessary than ever.

The streets of Madrid, the scene in previous years of massive demonstrations for International Women’s Day, will not host concentrations this Sunday nor marches after the Government Delegation has prohibited them for health reasons, a decision that has been ratified by the Superior Court of Justice of Madrid considering that the right “to health, physical integrity and life of the people” prevails over the right of assembly.

In the rest of Spain there will be concentrations, although with reduced capacity, which have not been questioned, outdoor events, applause from the balconies at 8 pm and alternative celebrations adapted to a context of a state of alarm.

This 2021, the health crisis has led the Government to call for responsibility in a state of alarm and to ask that an alternative demand for International Women’s Day resonate “with a loud and clear voice” but within the framework of “culture of care and prevention “, so as not to endanger the health or safety of people.

After the political battle that generated the celebration of the massive demonstrations on March 8, 2020, without health recommendations and a few days before the home confinement was declared due to the peak of covid-19 infections, this year the Executive has opted for caution, despite the fact that in these months multiple concentrations have been allowed, including that of denialist groups.

The majority of political parties have advocated a responsible celebration of 8M, but the decision of the Government Delegation in Madrid not to allow any demonstration or concentration to take place, ratified by the justice, has sparked controversy and has been harshly criticized by the feminist movement and trade unions. Once again, Madrid in the eye of the hurricane for March 8.

The Delegation of the Government of Madrid decided to prohibit “for reasons of public health” the more than one hundred demonstrations and concentrations that they wanted to celebrate in the region between Sunday and Monday because they could have brought together more than 60,000 people and some of them shared an itinerary .

Unions and feminist groups appealed this prohibition because they considered which is typical of other times and criminalizes women, since demonstrations in favor of health, education and even concerts of 5,000 people have been authorized.

But the Superior Court of Justice of Madrid has maintained the prohibition of demonstrations, after rejecting three of the appeals filed on various acts that were to take place this Sunday, and this afternoon it will notify the rest of the resolutions corresponding to those called for Monday.

The TSJM considers that the right “to health, physical integrity and life of persons” premium on the right of assembly in the face of the “high risk” of the spread of covid-19, in line with what was expressed by the Prosecutor’s Office.

This decision has only been taken in the Community of Madrid, in no other community, and contrasts, for example, with the demonstration called in Barcelona by the Vaga Feminista platform in which 3,500 people can participate, after registering.

The first vice president of the Government, Carmen Calvo, assured that the Executive’s decision aims to “not further aggravate” the health situation of the Community of Madrid, which has “the worst figures of the pandemic”: “Not putting health and lives at risk right now comes first,” he said Saturday.

The PP has applauded the decision, but a unanimous criterion has been requested throughout the territory because “it is not appropriate for demonstrations to be held this year” when “there is the same risk in Madrid as in any other autonomous community, according to the mayor of Madrid, José Luis Martínez-Almeida.

The Minister of Igualad, Irene Montero, has regretted that there are sectors that point to and criminalize the feminist movement and that want to “deny” the street to women as a space to claim and conquer rights.

The political noise has made headlines and has diverted the focus from the demands for which the feminist movement takes to the streets, a paradox if one takes into account that the pandemic has exacerbated discrimination, violence and inequality suffered by women.

A year in which They have also been mostly those who have been on the front line of the fight against the virus and in which they have suffered greater precariousness, more unemployment, increased poverty and great difficulties to reconcile in the context of the pandemic.

At a time when feminists need to shout louder, the health situation contains that cry, but the movement has organized events throughout Spain to vindicate women’s rights while avoiding contagion with imagination and creativity .

Decorated balconies, musical parades, concentrations with safety distance and prior registration, clothing in purple, bicycle routes and tributes to essential workers at 8:00 p.m. are some of the ways in which inequality will be censored, it will be protested against sexist violence and parity will be demanded, co-responsibility and greater and better inclusion of women in the labor market.

Between March 8, 2020 to March 8, 2021, it has been evidenced that the different feminist conceptions of the PSOE and United We Can have caused fissures between the partners of the coalition Government: especially in the preparation of the preliminary bill of only yes is yes and around the draft trans law.

On this last case, the differences between the two parties keep the draft paralyzed, in which gender self-determination is regulated from the age of 16 and that transsexuality is considered a disease.

The socialists, led by Vice President Carmen Calvo, consider that the political subject of the feminist struggle is women and their only objective, to end inequality and violence, while Minister Irene Montero advocates a more inclusive current that also fights against LGTBI discrimination or racism.

These differences have permeated the feminist movement, in which openly opposed positions have been seen, since various groups warn that the trans law would mean denying the existence of biological sex and, with it, that of the inequalities that women suffer due to being so.

The President of the Government, Pedro Sánchez, will participate on Monday in a ceremony together with the Minister of Equality and has launched a conciliatory message: “This 8M we need more feminism than ever, together and together.”