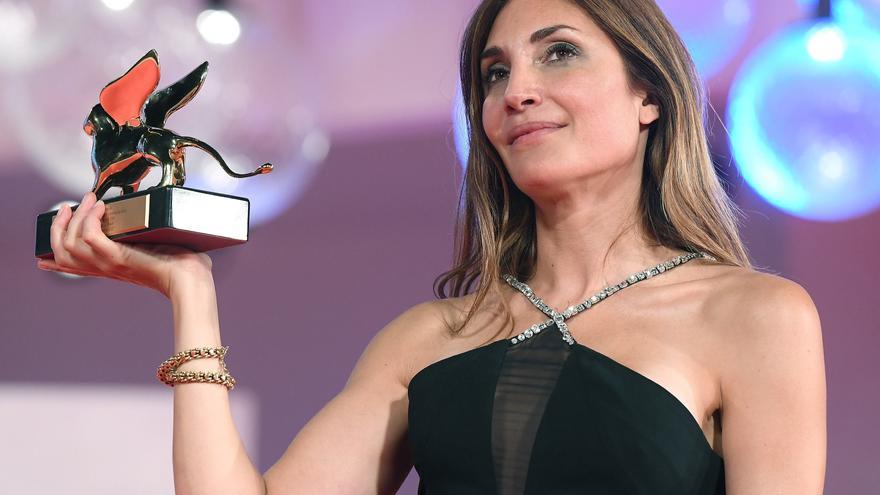 French filmmaker Audrey Diwan today became the sixth woman to win the Golden Lion of Venice with “L’Èvenement”, a realistic and visceral tape about the clandestine abortion in the sixties that quickly obtained the unanimity of the jury and the applause of the public.

The film is the adaptation of the homonymous novel by the French writer Annie Ernaux, who narrated the clandestine abortion she had to undergo in France in 1963 when this practice was not allowed.

“I made this movie with anger and desire, from my guts, my heart and my head, I wanted it to be an experience, make the journey in the skin of this young woman, that we did not see her but that we were her“said the director when she received the award at the Palace of the Cinema of the Venetian Lido.

The play, a realistic experience that follows the drama of a young woman, played by Anamaria Vartolomei, left no one indifferent, much less the jury, who decided to elevate it as the best film “quickly and unanimously”, he said at the wheel of final press its president, South Korean Bong Joon-ho, author of the Oscar-winning “Parasite” (2019).

Diwan heads a record in which women stood out: the Spanish Penelope Cruz as best actress for “Parallel Mothers”, by Pedro Almodóvar, New Zealander Jane Campion as best director for “The power of the dog” and the best screenplay has been for “The lost daughter”, debut feature by American Maggie Gyllenhall.

In this way, Diwan became the sixth woman to win the oldest international film competition on the planet and one of the most prestigious.

The first was the German Margarethe von Trotta for “Die bleierne Zeit” (1981), followed by the French Agnès Varda with “Sans toit ni loi” (1985), the Indian Mira Nair with “Monsoon wedding” (2001), the American Sofia Coppola for “Somewhere” (2010) and her compatriot Chloé Zaho, of Chinese origins, last year for “Nomadland”.

In the long-awaited Venetian record, the second most important award, the Silver Lion Grand Jury Prize it was for the italian Paolo Sorrentino for his most personal work, “È stata la mano di Dio”, which also gave the award for best emerging actor to Filippo Scotti.

The Volpi Cup for best actress went to Penelope Cruz and the best actor to Filipino John Arcilla, the latter for his role as a vigilante journalist in “On the Job: The missing eight”, about the repression of the press in the Philippines.

The Special Jury Prize It was taken away by “Il Buco”, the riskiest bet, on a speleological expedition shot with precision by the Italian Michelangelo Frammartino. And the best screenplay was for “The lost daughter” by Maggie Gyllenhaal, an adaptation of the novel “La figlia humana” by Elena Ferrante.

The Silver Lion for the best direction ended up in the hands of the New Zealander Jane Campion for its powerful “The power of the dog”.

After years of dominance, Latin American cinema left empty-handed and none of its four films in the official section were awarded: “La caja”, by Venezuelan Lorenzo Vigas; “Sundown”, by the Mexican Michel Franco; “Official Competition”, by the Argentines Gastón Duprat and Mariano Cohn, and “Spencer” by the Chilean Pablo Larraín.

The second Venetian Mostra in times of pandemic thus came to an end, after ten days of cinema in which it managed to regain at least part of the verve and stardom of the past, after last year’s edition, certainly tarnished by the virus.

All despite many restrictions and an “anti-fan” wall that prevented the crowd from crowding on a red carpet that passed from Ben Affleck in his first public appearance with Jennifer López, a Zendaya, Thimothée Chalamet, Jessica Chastain, Oscar Isaac, Antonio Banderas, Kate Hudson o Matt Damon.

But at the same time another conclusion can be drawn from Venice, and that is that it stands as the competition of the giant Netflix, in contrast to its most direct competitor, Cannes, which does not admit platform films because they do not comply with the French legislation on the subject of of exhibition in rooms.

The latest works by Sorrentino, Campion and Gyllenhall will in fact be able to be seen from home soon.