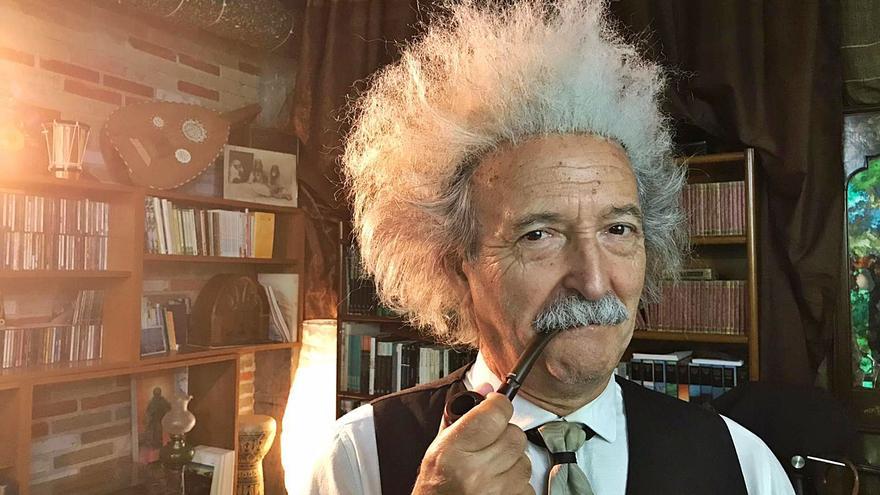 It is the first scientific musical on the national stage scene. This is confirmed by the Valencia Science Museum. And its author and director, in addition to the production team and the technician, are from Alicante. Juan Luis Mira devised this proposal, developed it, composed the music and was chosen so that as of next day 25 it will be added as one more activity of the Valencian museum.

An image of the rehearsals. | INFORMATION

Ramona y Cajal is the title of this musical in which Mira combines popular science and theater. An apple sings the rap of relativity, Einstein also raps about the secrets of space and time, Darwin appears and there is a place for Stephen Hawking. All this through music, video, animations and effects. “It is the story of two young people who during one night in a museum live endless adventures related to the most important scientists”, says the Alicante playwright and director.

The production, carried out in collaboration with the Master in Applied Dramatic Art of the University of Alicante and coordinated by its academic director, John Sanderson, has been carried out with the aim of being offered in the Museum of Sciences on a permanent basis.

A musical from Alicante for the Science Museum

«It is a work for family audiences, with which it is intended to reach children, but also that adults have a good time and more that they learn what we say that they become aware of the commitment to science, the invisibility of women in this field and love for research, so that you change the look of the world a little, “he says.

For Juan Luis Mira it is remarkable that the production at the end is 80 percent from Alicante. «I introduced myself and liked the idea, in the competition they also chose the lighting and sound company, as well as the animations and the video … That suddenly something so powerful that is being done for the first time in Spain is from the province It shows the level we have here, that Alicante has great potential even though it is sometimes not appreciated ». For many circumstances, he says, “it has been like that.” Only the cast is not from Alicante, “although one of the actresses is.”

In principle, there will be two passes to be made each day of this musical, which lasts 50 minutes. “The theater is combined with projections and animations, it is a fairly developed show,” says John Sanderson. “It’s about making it part of the museum visit experience and something like this hasn’t happened before.”

An Alicante musical for the Science Museum

In addition, the head of production emphasizes that in addition to talking about science in function, “technology is used for its development.” And it highlights how Stephen Hawking is played by a wheelchair “that moves by itself on the stage.”

The project began three years ago, but it has not been until now when it has been possible to carry out and prepare for its premiere. After selecting the proposal by Juan Luis Mira and the teams, it was necessary to reform one of the closed spaces inside the museum to house this work. The rehearsals began a couple of months ago and now is the time to face the public to see their reaction. “We are starting the performances with an audience now to test, there are also two teams of actors and we have to adjust everything well,” says Juan Luis Mira, waiting for the great premiere that will take place on the 25th.